Can Turkish government do more to reduce pedophilia?

The death of another “child bride” has put the family and marriage policies of the Justice and Development Party under scrutiny. 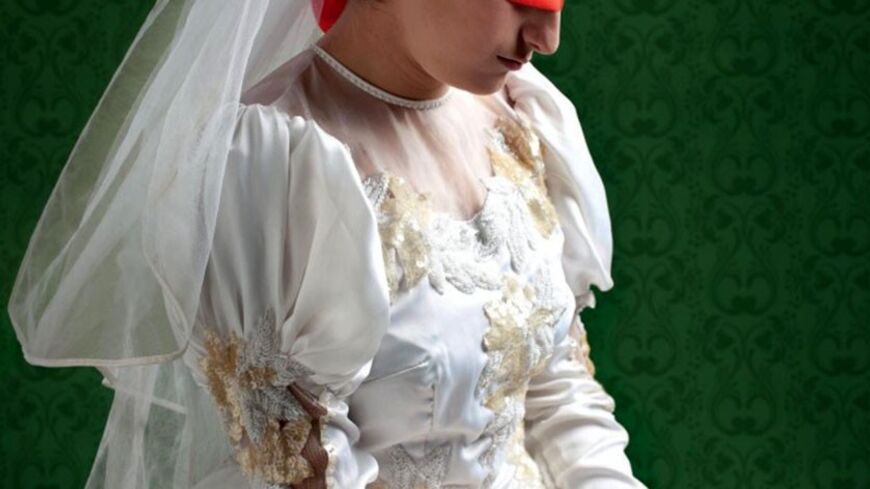 A social media campaign in Turkey has been suggesting the use of the word "pedophilia," rather than “child bride.” - www.girlsnotbrides.org

12-13-14 … These are the numbers that kept being repeated in the news with a young child’s photograph in the background. Her name is Kader. Kader means fate in Turkish. She was forced into a berdel (exchanging of brides between two families) marriage at the age of 12 or younger. She had given birth to a baby boy. She was 13½ years old when she died of bullet wounds on Jan. 12. Her father was on the news saying, “This is fate.”

Only a few days before her death, Al-Monitor’s Turkey Pulse published a stellar piece by Riada Asimovic Akyol on the issue of child brides. Akyol makes a crucial point that we need to raise awareness about the problem and says, “If the state, media and religious leaders continuously stand against child marriage publicly, the phenomenon will cease to be so hushed up.” I am not quite sure if the problem is “hushed up” much at all in Turkey. Yet, I agree with Akyol that it is a problem.

Pedophilia, rather than “child bride,” as a Turkish social media campaign have been suggesting for several months, is the more accurate term to use. Most pundits are vehemently against associating the positive term “bride” with the crime. One activist called it “rape with parental consent and wedding bells.” Making it sound cute and almost acceptable by using words as “little bride” and “young bride” in sitcoms and movies which repeat that this is destiny, is indeed counterproductive.

This sore issue has been in the spotlight for decades in Turkey. There are countless movies and songs on the topic. Sezen Aksu, a prominent singer, had produced a well-known song telling the story of “Unzile” in 1986. Unzile is young girl who reaches puberty at the age of eight, gets married off right away and becomes a mother at the age of 12, just like the victim in our story. The song asks, “How many sheep is Unzile worth?” These “marriages” are both physical and labor exploitation of minors.

There are a couple of crucial facts about underage marriage: It is illegal, according to Turkish civic law. Hence, it should be considered statutory rape, but it is not. It is not a random event, rather there are several rituals to follow and the families are involved. It is correct that the “tradition” is more frequent in rural parts of the country where families are financially struggling. Most, if not all, families are well-aware that what they do is against the law. They also know the silent code of conduct is “don’t ask, don’t tell.” Everyone knows they will not be penalized. It would be unwise to portray the problem to be associated exclusively with one section of society (or with the Muslim world for that matter); it is not just the poor, the uneducated, a particular ethnic group or the pious that opt for underage marriages. If nothing else, google the name Hayrunnisa Gul: She is the Turkish president’s wife, the first lady. The Wikipedia entry of her name will inform you the couple married when the president was 30 and his bride 15, making her “the most famous child bride of Turkey.”

Underage marriage therefore is a misnomer, since no minor can be considered married in accordance with Turkish civil code; (there are discrepancies between different regulations and laws, some stating 16, others 17 or 18 as the age of a minor) and the religious marriage (imam nikahi) is only possible when the couple can produce a legal marriage license. A columnist for Democrat Haber daily, Veli Bayrak, told Al-Monitor, “It is not just a religious marriage: Remember, the imams represent the state.”

Bayrak is right, because in Turkey, the government employs all imams. Hence, the Directorate of Religious Affairs issued a statement on Jan. 14 saying, “We determine the eligibility to get married on the basis of age. We will start legal investigations for any imam who does not follow the guidelines. We will also initiate programs to inform the public about the disadvantage of underage marriages.” If the directorate indeed follows through, it will definitely be a crucial step in the right direction.

As Hilmi Demir, professor of theology at Hitit University, told Al-Monitor, religious marriages should be registered after the civic union is established so imams should not be involved in any unrecorded marriage process. Demir emphasized how important it is to standardize and monitor the process diligently and to endorse all laws to curtail pedophilia and other forms of child abuse.

Hatice Altinisik, deputy chairwoman responsible for "people and their beliefs" of the People's Democratic Party (HDP), who has years of experience in the field of helping young girls stay in school, told Al-Monitor, “Despite the laws against underage marriages, there are ways to go around it. The state seems to find it easy to reward the perpetuators rather than protect the victim. We need legal deterrents to curtail the number of underage marriages, such as a prison term for the groom, the parents of the bride, the imam and any family member involved in the process. Keeping it a private family matter leads to much suffering and sometimes to the death of the girls.”

Nebahat Akkoc, chairwoman of KAMER (a prominent women’s rights organization) emphasized a crucial point to Al-Monitor that not all religious weddings are necessarily carried out through the government’s imams. Some families may even opt for a pious man they respect to bless the “union.”

Kader’s death is political now. Umut Oran, vice president of the Republican People’s Party (CHP), the main opposition party, told Al-Monitor he submitted three questions to Prime Minister Recep Tayyip Erdogan regarding Kader. They are: “Why do not you instruct the imams not to allow underage marriages?”; “Do you allow underage marriages because of your expectation of at least three children per family?”; and “Will you revert back to the eight-year compulsory education system from your four-year initiative which increased the number of victims?”

The facts about underage marriages are striking, scary and incontestable. The problem is common. It happens, simply because it can. No parent has been charged for marrying off their 11-year-old daughter. No man “married” to a minor is charged with rape. Indeed, it is the other way around: the rapist gets a get-out-of-jail-free card if he agrees to marry the victim. This still happens in today’s Turkey. Every other instant your age is determined by your ID card, except for the cases of rape, where a minor’s “bone age” is checked. There are inconsistencies between different laws and regulations and several loopholes, making the laws moot.

To add insult to injury, the ruling party’s approach to the issue has been less than encouraging for women. Did you ever see Erdogan condemning men for marrying minors? Instead, his Justice and Development Party (AKP) has changed the “Women Affairs Ministry” to “Family Affairs Ministry,” and struggled to find ways to increase women’s fertility and make divorce more difficult for women.

Kader’s death was preventable, but Turkey failed. Unless there is sufficient pressure on the government, there will be more children dying from sexual and physical abuse. Yet, they are minors — they do not vote. Your individual awareness of the problem does not mean much if you cannot ask your government for action on their behalf. What does it mean to be an “advanced democracy” if each year thousands of children are forced into marriage and labor right before our eyes?