Turkey is reconsidering — but not abandoning — a law that would treat perpetrators of statutory rape as "victims," which some fear could open the door to polygamy, honor killings and legalizing marriage at puberty. 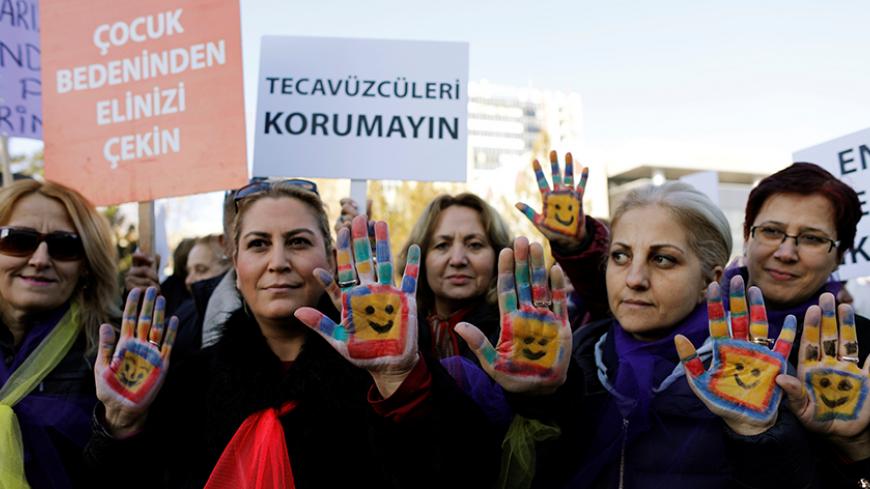 Protesters show their painted hands during a protest against a proposal to pardon men who have been charged with statutory rape if they agree to marry their victims, in front of the Turkish parliament in Ankara, Turkey, Nov. 22, 2016. - REUTERS/Umit Bektas

After an outcry heard around the world, Turkey decided Nov. 22 to reconsider a proposal that, in some cases, would pardon rapists of underage girls if no physical force was involved.

On Nov. 17, the ruling Justice and Development Party (AKP) of Turkey made a proposal to parliament that would pardon men charged with statutory rape prior to Nov. 16 if they have married or agree to marry their victims. Once the bill was shared with the press, there was an uproar on social media, and although public gatherings and demonstrations are illegal under the emergency law in Turkey, women organized several protest marches around the country.

One lawyer told Al-Monitor that the proposed law "normalizes a crime against humanity."

With the intense public condemnation, the AKP agreed Nov. 22 to recall the proposed law — for now.

The AKP has been quite successful in reversing progressive laws it had introduced over the years. For example, in 2005 it was the AKP-led government that approved a change making sex with minors under 15 statutory rape, period. That is, rapists could no longer avoid jail time by agreeing to marry their victims, even if the marriage had the child's or parents' consent. Indeed, over the years, the AKP also approved legislation that increased jail time to 16 years for statutory rape, up from 5 years.

Rape cases are always in the news in Turkey. Over the past couple of years, statutory rape in juvenile prisons, religious schools and boarding houses has affected hundreds of children. The most notorious case involves the Ensar Foundation — known for its intricate links with the government — where 10 boys were raped. The minister of family and social services criticized the press coverage of the case, saying, “Just because this happened once, we should not tarnish the reputation of Ensar Foundation.”

The recalled bill is a continuation of what started in December, when the AKP-controlled Constitutional Court first canceled the required 16-year sentence for statutory rape. Then, in May, Al-Monitor reported on a parliamentary investigative commission that recommended decreasing the legal age for marriage. The commission recommended that rapists who agree to marry their victims should be forgiven, and that religious marriages should be allowed at a younger age than civil marriages, along with other mind-boggling suggestions. Just two days before the July 15 failed coup, the court decided that even the age of 15 was not appropriate for defining statutory rape — because raping a girl of that age should not carry the same consequences as raping a 4-year-old. Those steps did not garner sufficient public attention to make headlines, but the new proposal hit a nerve.

AKP members have been working full-time on TV and social media to defend the proposal from every angle. For example, Vahdettin Ince told CNN Turk TV: "What other cultures accept is not universal. Eighteen years as the limit [to be considered an adult] may be in the law, but I don’t think it is correct. Why wait [to get married] until 18 years old?” Ince and several others argue that Islamic law, which allows all individuals to marry upon reaching puberty, should be applied.

Currently in Turkey, a child aged 15 or older can legally get married with parental permission. The minimum age would have changed under the proposed law if the perpetrator agreed to marry the victim. Hence, the law serves two purposes: legalizing marriages for those under the age of 15, and providing amnesty for those who are currently being prosecuted. Although AKP members vehemently claim this one-time pardon only applies to cases of consensual sex, it is problematic to consider sex with a child younger than 18 to be consensual.

AKP leaders sank even deeper as they struggled to defend the proposed legislation. For example, Justice Minister Bekir Bozdag told the press: "The law does not cover rapists, just people who had sex with minors." Bozdag argued that the proposed law was aimed to provide one-time relief for about 3,000 men currently in jail whom he considers victims. He said that these people had formed families — without a legal marriage — and that the minors and their parents consented. His words — “minor’s consent” — generated an uproar on social media. Bozdag also took to Twitter, insisting that the law only covers cases in which the "couples" are in a religious marriage yet unable to obtain a civil marriage certificate due to the girl's age. They must subsequently agree to a legal marriage.

On Nov. 19, Bozdag, with his unyielding stance in favor of the law, added insult to injury, in a sense, when he said: “In some places, particularly in places where Roma people live in high numbers, our citizens carry out ceremonies, weddings for underage [girls]. We do not approve of it.” Independent media described the minister’s comments as racist. Indeed, there is no evidence that the victims Bozdag claims to save are Roma. To the contrary, those who are brave enough to report from the field explain in detail that the problem is pervasive all around the country.

Although Bozdag and other AKP members claim this is a one-time pardon, neither the public nor lawyers are convinced. A human rights lawyer who specializes in minors’ rights told Al-Monitor: “This kind of a blanket amnesty normalizes a crime against humanity. It therefore sets a precedent to allow marriage at any age as long as the minor is said to have reached puberty, as early as 8 or 9 in Turkey.” Indeed, that is what Islamic law suggests, and this has been a longtime battle for different religious orders and tribes in Turkey. It is an open secret that the law was introduced to appease these groups, whose support is crucial for Turkish President Recep Tayyip Erdogan in his quest for an imperial presidency.

That said, KADEM — the Women and Democracy Association, whose vice chair is Erdogan’s daughter — posted a press release about the proposed law raising certain red flags, particularly about how to determine the free will of a minor. Initially, that reaction was seen as a stand against the law, but it was later clarified that the foundation was not saying the proposal is wrong, only incomplete.

The AKP's definition of victimization varies among rape cases. The AKP wants the public to sympathize with and forgive the rapists. Its arguments are that male "victims" are suffering in jail merely for following tradition and that there are too many such cases to ignore. The same arguments could extend to other matters — for example, honor killings are traditional, and so is polygamy. Is the next step to legalize polygamy since that system also produces "victims"? Should honor-killing perpetrators be forgiven, as they are following a tradition?