AKP bill to pardon child rapists who marry their victims

Turks are furious over a proposed law that would commute the sentences of men who have sex with minors if they end up marrying the girls, but Turkey’s ruling party has the simple majority it needs to push the law, which it claims is intended to address legal issues surrounding child marriage, through parliament. 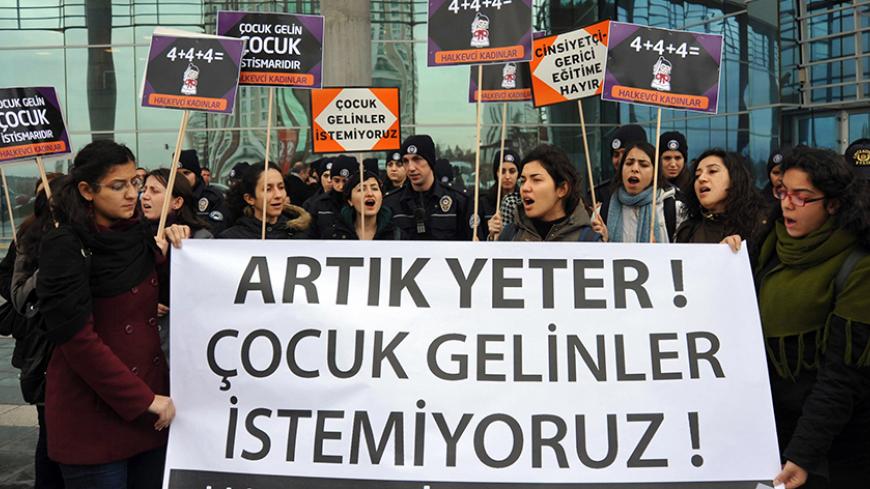 Defying a nationwide outcry, Turkey’s ruling Islamist Justice and Development Party (AKP) appears bent on ramming a bill through parliament that would pardon child rapists if a perpetrator marries his victim. AKP parliamentary whip Mustafa Elitas refused to withdraw the measure, which is likely to be approved in a second round of voting on Nov. 22. Scrapping the bill “is out of the question,” he said.

A simple majority, which the AKP commands, will suffice for its adoption.

Many see pardoning men who engage in sex with little girls as part of the AKP’s broader agenda of imposing what human rights lawyer Erdal Dogan described to Al-Monitor as “a medieval lifestyle governed by Islamic laws.”

Elitas claimed that his party would consider changes to the bill proposed by the main opposition secular Republican People’s Party (CHP). Deputy Prime Minister Numan Kurtulmus echoed the offer. But CHP whip Ozgur Ozel said no one from the government had contacted his party with regard to the affair thus far. He further asserted that the bill, if passed as is, offers “a ticket to freedom” for "17,000 abusers.”

Women’s and other rights groups, including some prominent pro-Islamic female essayists, have reacted with fury to the proposal, saying it will give free rein to pedophiles. “It will in the long term transform the lives of young girls into hell,” wrote Fatma Barbarasoglu in Yeni Safak.

On Nov. 20, thousands of people including women and children marched against the bill in the determinedly pro-secular Kadikoy district in Istanbul.

A day earlier, the United Nations Children’s Fund said it was “deeply concerned” by the legislation.

It may be no coincidence that numerous women’s organizations that had been campaigning against child marriage were among some 370 associations whose activities were shut down under an emergency law decree.

Rights activist Nurcan Cetinbas ran one of the banned outfits in the mainly Kurdish city of Mus in southeast Turkey. She told online news portal Diken that field studies suggested that the proportion of marriages with minors in Mus was around 60% in the city center and as high as 70% in outlying boroughs.

Cetinbas said that contrary to government claims that the law is compatible with Turkey’s “cultural fiber,” all it will do is send a signal to child rapists “to carry on.”

The government is defending the move as an attempt to smooth out legal wrinkles arising from the issue of child marriage, which is woefully widespread in Turkey. Former Turkish President Abdullah Gul famously married his wife Hayrunnisa when she was 15 and he 30.

The AKP insists that the amnesty will apply only to those who had intimate relations with girls aged 15 or under without use of “force, threat or any other restriction on consent.” Men convicted in such cases between 2005, when a similar law was scrapped, and November this year, would be eligible to have their sentences commuted if they married their victims.

Dogan speculated that the bill might have been devised in part to address the ballooning allegations of sexual abuse from Syrian child refugees who are employed as household help. In May, English-language Hurriyet Daily News reported that a total of 30 Syrian refugees aged between 8 and 12 had been sexually assaulted by a cleaner in the Nizip refugee camp on the Syrian border.

The offender was sentenced to a total of 289 years in prison. All of his victims were boys.