Is this the last nail in coffin of women, minors' rights in Turkey?

An AKP-led parliamentary commission releases a draft report on how to protect the sanctity of the family in Turkey by providing controversial suggestions. 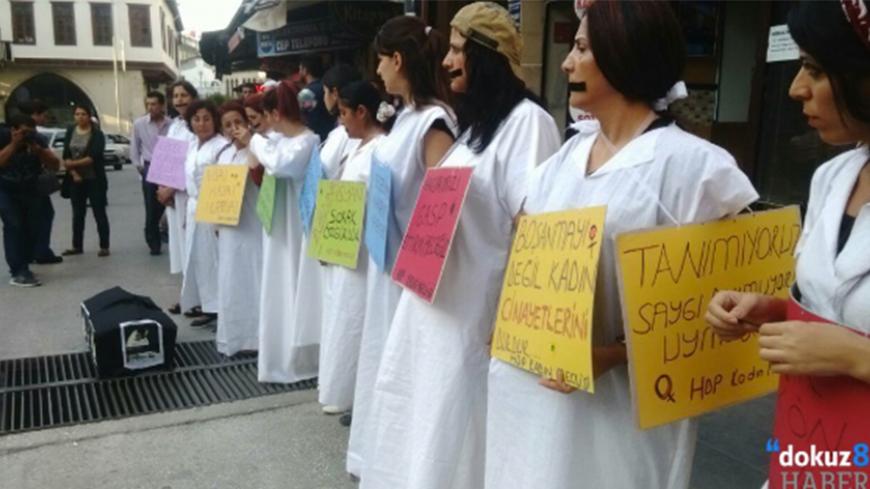 On Jan. 14, the Turkish parliament established an investigative commission called “Protecting the Integrity of Family,” with the purpose of investigating the causes of the skyrocketing divorce rates. The Republican People's Party (CHP) and Peoples' Democratic Party (HDP), Turkey's left-leaning opposition parties, announced their disapproval. Since then the draft report of the commission, nicknamed Divorce Commission, has been making waves in the Turkish media and on the streets.

Following the report, Turkish women all over the country stood up against it in novel ways. In Antakya province, women wore white shrouds on May 26 to protest the report, while several college campuses joined in protests by women’s rights groups. Members of the group Mor Cati (Purple Roof) sent a “stigma certificate” to Justice and Development Party (AKP) parliamentarians on the commission. On Twitter, hundreds of critical tweets poured in under the hashtags #BosanmaKomisyonu (Divorce Commission) and #DevletTecavuzcuyleEvlendiriyor (State Forces Marriage with Rapists).

Although there are several serious social problems in Turkey, such as the skyrocketing number of women’s murders, increasing cases of pedophilia and widespread sexual violence, the AKP is convinced that divorce is a crucial issue that needs to be prioritized. Gulsum Kav, founder of the platform “We Will Stop the Murder of Women,” told Al-Monitor, “Given all the imminent matters it is not even justifiable to form a commission on divorce. Therefore these recommendations should not be taken into consideration for new legislation. We do not recognize this commission.”

In addition, it is difficult to pinpoint the overall goal of the report because some of its recommendations are contradictory. The 479-page-long draft report includes four main areas that are particularly alarming.

This is the most mind-boggling section of the report. It establishes the legal age of marriage as 15, not 18, and considers those younger than 15 to be minors. So if these minors are engaged in sex with adults and if they decide to get married then there will be no charge of pedophilia. Rather, the marriage will be observed for five years and if there is no physical violence then there will be no punishment. This has been named in Turkish social media as "marrying your rapist" law. Facing mounting criticism, Ayse Kesir, AKP parliamentarian and chairwoman of the commission, appeared on CNN Turk and claimed this suggestion would only apply to 3,000 families that have been already identified, as the young girls have willingly run away with their lovers, and had children. Kesir said that when the men are jailed, the women and the children suffer.

So why not observe these marriages for five years and keep the men out of jail to keep the sanctity of the marriage? This issue, Kesir claimed, was brought to their attention by a mother of two who ran off with a man when she was 14. She had two children, and their father is in jail for 8 years. Kesir referred to the couple as man and wife, which makes one wonder when they legally got married and when these children were born. Why was this illegal situation not caught when the first baby was born? Kesir claimed that his main concern was to help the father, who was not referred to as a pedophile. She did not explain how a law can be suggested exclusively for an existing case and not set a precedent.

It is worth noting that polygamy is only mentioned twice in the report, as one of the negative effects of the media. Similarly, religious marriage — which is not legal in Turkey, yet quite common particularly for underage and polygamy settings — is mentioned only once.

While violence against women has reached extremely high levels in Turkey, the report mentions safe houses for women only once, and rather focuses on a system of mediation for women who have suffered domestic abuse. Nebiye Mertturk, a representative of nongovernmental organization Halkevci Women, told Al-Monitor, “The commission’s recommendations make initiation of legal complaints about violence all the more difficult.”

Diren Cevahir Sen, an attorney fighting for women's rights, told Al-Monitor that the recommendations would require women not to seek help from nearby police but to travel long distances to issue a complaint. Sen said that this change in procedure “is almost equivalent to handing a death sentence to women trying to escape violence.”

The report alleges that it aims to minimize divorce. For that purpose it is recommended to have mediators.

Another concern is that divorce cases should be held in secrecy to protect the privacy of the family. Yet, several women’s associations believe this is a method to keep independent observers away from the courts, and therefore leaving women more vulnerable. The report advises to reduce the years of separation required to seek divorce from three to one, which is interesting because mostly in Turkey it is men who have the means to leave the household. So now while claiming to minimize divorce rates, this indeed would make divorce easier.

Post-divorce, the recommendations suggest limiting the time period for alimony. Yet, it does not provide evidence on what percentage of divorced couples actually rely on alimony payments on a regular basis. Given the fact that employment rates for women are very low in Turkey, the recommended changes in alimony would mean women without an income should strive to survive in their unhappy marriages to avoid becoming destitute. Similarly, the recommendations put women who are not well educated and lack access to lawyers at great risk to lose their inheritance and alimony payments.

As predicted, family advisers from Diyanet (Religious Affairs Directorate) are to be appointed to reconcile couples, as well as helping them through divorce. For example, the report advocates that if the divorce court observes there is still hope for the couple and their marriage; they will be referred to work with family advisers. Given the Islamic approach of Diyanet to gender issues, one cannot help but wonder how their advice will balance out with the secular civic code.

Understandably, opponents of the draft report voice concerns about the rising influence of Islamic laws on Turkish civil code to prevent divorce, as the data is controversial. First, the divorce rate in Turkey is about 1.7%, while the marriage rate is 7.7 % annually. To put it in perspective, this is a miniscule figure compared to countries such as Saudi Arabia where divorce rates are three times higher than the marriage rate. Similarly, Qatar and Iran record higher divorce rates than Turkey. Second, issues such as divorce, alimony and domestic violence in Islamic law are not handled as arbitrarily as the draft report of the commission advocates. Mehr, a requirement of Islam, similar to a prenuptial agreement, is not at all discussed. The commission’s proposed changes could indeed encourage more rapes, pedophilia packaged as “early marriage,” and violence and abuse against women in and outside the home.

Given the fact that the commission’s chair is a woman, pundits are shy to use the word misogynist, yet reading through almost 500 pages one cannot help but wonder what deep-rooted feelings of hatred are harbored against women, particularly those who are young, uneducated and disadvantaged. Given the surmounting difficulties of the Turkish patriarchal family and social structure battling honor killings, domestic violence and abuse, the issue is no longer divorce or preserving family but purely survival for women and minors.