In Turkey, women’s groups and the political opposition are demonstrating in support of the We Will Stop Femicides Platform as it fights for its survival. 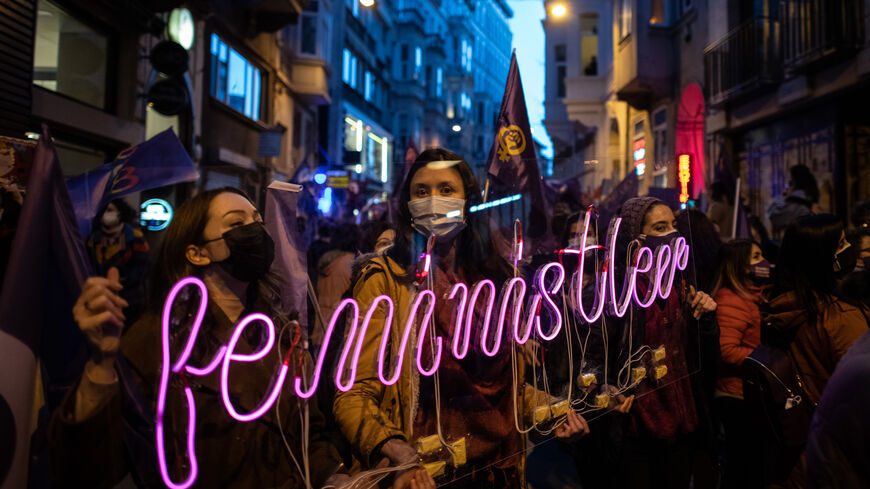 Turkey’s opposition politicians, bar associations and rights groups made a joint show of force in front of Istanbul’s main courthouse on June 1 to protest the lawsuit that threatens to shutter Turkey’s oldest and most vocal anti-femicide group.

The We Will Stop Femicides Platform, which provides legal advice and advocacy to women who need protection from violence, is fighting for survival as it faces half a dozen charges that range from “undermining the family” to “insulting the president.”

“You will not be able to stop us,” Gulsum Kav, the platform's chair, said in a statement in front of the court, pledging to fight the charges. “But we, through our determined efforts, will stop femicides. The crowd here - with representatives of political parties, bar associations, survivors of violence and families of femicide victims, showed us that we do not walk alone."

213 groups, including bars, universities and women's groups, signed a petition of support. Whilst representatives of Turkey's left-wing parties were present at court, the only center-right party that showed up for support was DEVA, which is part of the six-party coalition lead by the Republican Peoples' Party. Ali Babacan, DEVA chair and a former minister of the AKP, condemned the charges as "legally baseless."

“The changes are not very clear,” Leyla Suren, one of the organization's lawyers, told Al-Monitor. The indictment, seen by Al-Monitor, cites complaints that date back nearly six years and claim that the platform has deviated from its aims in a way that violates Turkish law and morality.

The public prosecutor calls for the closure of the award-winning nongovernmental association, which has more than 700 members and a wide network of collaborators and volunteers. The platform was founded 12 years ago after 17-year-old Munevver Karabulut was killed and cut to pieces by her boyfriend. The platform’s online tally, updated daily to count the women who fall victim to domestic violence and what it calls suspicious deaths, tells a very different story from what the government agencies share. It reports that there have been 159 femicides so far this year. Last year, it recorded 280 femicides and 217 suspicious deaths.

The lawsuit is founded on a complaint made in 2016. Ahmet Eliacik, a man outraged at spending two nights behind bars for failing to pay alimony, wrote an angry letter to the Interior Ministry, the prosecutor’s office and a hotline that allows citizens to air their grievances and opinions. Eliacik told HalkTV’s Ismail Saymaz that the platform has broken up many families, his own included, under the guise of protecting women and children. “What they do is to undermine the family structure of our country and set the country one against the other,” he said. “It supports jailed [Kurdish] deputies and has links with FETO,” in a reference to the alleged crime gang of US-based cleric Fethullah Gulen, which Ankara holds responsible for the 2016 coup attempt.

Eliacik, who allegedly escaped jail only after the local AKP branch paid his alimony for him, was not alone. “Several others had similar complaints, all reading as if written by the same hand,” Suren said. However, none of them — nor their estranged spouses — had any previous contact with the platform.

All the complaints bore the fingerprints of the conservative camp, with allegations that family is under attack, resentment over alimony (which, under Turkish law, is only paid if the woman has no income, though courts do ask for child support), and references to “immorality” — which may refer to LGBTI Turks or female musicians wearing revealing clothing.

When served with the lawsuit in April, the platform’s first reaction was disbelief, saying in a statement, “Trying to make up crimes against us with these unlawful and baseless allegations is deplorable even in terms of the current legal order.” Saymaz pointed out during his show that even Eliacik was surprised that his complaint six years ago had led to a lawsuit.

Suren said that while the investigations may appear to have been going on since 2018, the platform members were never invited to testify or respond to the claims made. “What we have seen so far in the indictment is several social media posts by our volunteers, not the staff, criticizing the attack against the Cumhuriyet newspaper or criticizing some statements of the president. They have also put in the indictment the police reports — not criminal records because there is no conviction — about some of our members during a Women’s Day march,” she said.

The indictment hints that the platform — which also advocates for the LGBTI+ community — has deviated from its original aim of protecting women. “This simply is not true,” said Suren. “Our founding charter makes it clear that we support the LGBTI.” Various LGBT groups were present at court to support the platform.

Suren and other lawyers think that the case could drag on, as many human rights cases do. “If the court dismissed these flimsy charges in the first trial, I would be very happy for my country’s justice,” she told Al-Monitor before the June 1 hearing. “But given the recent moves against nongovernmental groups, it is likely that the case will be prolonged.”

She was right. The court scheduled the next session to October 5.

The lawsuit follows Turkey’s withdrawal from the Istanbul Convention, the landmark Council of Europe accord that holds states responsible for protecting women from gender-based abuse and violence, prosecuting abusers and promoting policies to prevent harassment. President Recep Tayyip Erdogan, who scrapped the accord with a midnight decree in March, said that Turkey’s laws were sufficient to protect women from violence.

But Human Rights Watch, which has carried out a series of interviews with Turkish domestic violence victims and their lawyers as well as police officers, judges and prosecutors after the withdrawal from the Istanbul Convention, reported that the government has failed to enforce Turkish courts’ restraining orders.

“While police and courts in Turkey are responding to women’s complaints of domestic violence by issuing more restraining orders, the failure to enforce them leaves dangerous protection gaps,” Emma Sinclair-Webb, Human Rights Watch's Europe and Central Asia Division associate director, said last week when the report was released. “The lack of enforcement has meant that women on the authorities’ radar have been killed by their abusers or subject to recurrent violence over years.”

The 85-page report, “Combatting Domestic Violence in Turkey: The Deadly Impact of Failure to Protect," cites the case of Yemen Akoda, shot dead by her husband Esref outside her home in the central Anatolian town of Aksaray in 2021. Before the murder, courts had on four separate occasions issued preventive orders directing Akoda to stay away from his wife after he harassed her when she filed for divorce. Though he repetitively violated them, the court had not taken any of disciplinary sanctions due to what it said was a “lack of evidence.”

The report says that lawyers and women’s rights groups expressed concerns about the withdrawal from the Istanbul Convention. While Turkey still has its own low on protecting families and preventing violence against women (Law No. 6284), one lawyer describes it as “like a building whose foundations have been removed.”

Conservative groups in Turkey, giddy with the withdrawal from the convention, have stepped up their attacks on the law, saying that swiftly issued restraining orders break up the family unit before giving it a chance for reconciliation. Moreover, the alimony lobby, highly organized and vocal with its online supporters tweeting hashtags like #notolifelongalimony and #alimonyvictims, has pushed the ruling Justice and Development Party to draft a new law.

The platform and other women’s groups have objected to the bill, saying that limiting the period of alimony or child support would be another way to trap women in violent marriages. “The draft aims to please a small group of men who have been promoting propaganda against alimony. It is just like the government’s move to withdraw from the Istanbul Convention to please the same people,” read the platform's statement.