In the wake of a headline-making femicide in Istanbul, activists and politicians have revived calls to return to the Istanbul Convention. 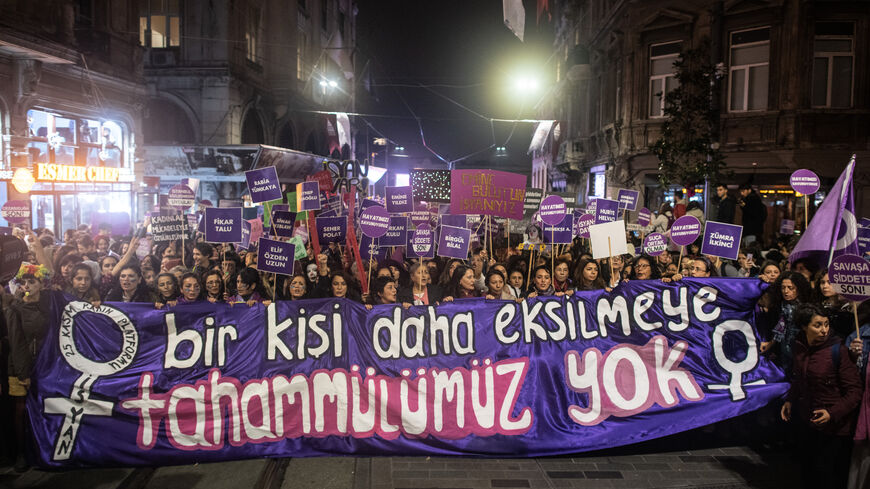 Six months after President Recep Tayyip Erdogan scrapped the Istanbul Convention with an overnight decision, a brutal femicide in a white-collar neighborhood of Istanbul spurred calls for return to the international anti-domestic violence accord.

Known as “the Samurai sword murder,” the femicide instantly became still another symbol of an environment that leaves women vulnerable to harassment, abuse, violence and murder.

Unlike many victims of femicide in Turkey who are killed by partners or ex-partners, Basak Cengiz, the 28-year-old architect who died in a hospital from the fatal wounds, did not know the man who attacked her. “I wanted to kill someone. I went out and picked a woman because I thought it would be easier,” her attacker, identified as university student Can Goktug Boz, was quoted by the Turkish press as saying. Initial reports read that Boz has been treated for substance abuse in the past. He has pleaded mental incompetence, but the women's rights activists and lawyers claim online that the defense is often a ruse that enables men to get away with murder.

The first reaction from the ruling Justice and Development Party (AKP) came Thursday from party spokesperson Omer Celik. “I cannot find words to describe the cruelty of this murder,” he tweeted. “It is all women who are targeted in the name of Cengiz. It is high time that we collectively mobilize against femicides.”

Celik sounds as if “it is not his party that has been in power for nearly two decades and who has taken Turkey out of the Istanbul Convention, a key accord for protecting women against violence and prosecuting abusers. The AKP policies ignore women and feed the culture of gender-based violence and abuse. They enable abusers to get off with a light sentence merely because they look presentable at trial,” Aylin Nazliaka, the chair of the women’s branch of main opposition Republican People’s Party (CHP), told Al-Monitor.

“I visit the families of women who are killed by men. In Malatya, a family whose daughter was killed by her husband for no other reason than not answering his call said that they felt sure that their son-in-law would get off with a light sentence now that Turkey is no longer part of the Istanbul Convention,” she said.

Despite protests from national and international actors, Erdogan announced in March that Turkey would withdraw from the landmark Council of Europe convention, the far-reaching accord that holds states responsible for protecting women from gender-based abuse and violence, persecuting abusers and promoting policies to prevent harassment. The withdrawal became effective on July 1, after Turkey’s Council of State ruled 3-2 that the presidential decision was sufficient to withdraw from an international treaty.

On Nov. 11, various women’s groups that mobilized for a demonstration at Istanbul’s main court house in Caglayan accused the government of creating an atmosphere that made it not only physically but legally easier to attack women, by letting male murderers get reduced sentences for good behavior and scrapping an international accord that held the state accountable for protecting women and prosecuting abusers.

The protesters shouted slogans such as “Reinstate Istanbul Convention” and “Justice for Women,” holding photos of Cengiz along with Pinar Gultekin, a young woman who was strangled and burned by her ex-boyfriend last year, and Cilem Dogan, who faces 15 years in prison for killing her abusive husband who forced her into prostitution. “We need justice for those who are not with us,” said Fidan Ataselim, who heads the We Will Stop Femicides Platform. “We will not give up on the Istanbul Convention. We will start every sentence with Istanbul Convention.”

Ataselim’s last remark was a reference to Erdogan's remarks on Monday. Castigating Meral Aksener’s center-right IYI Party over a gender-based slur by an IYI deputy, Erdogan said, “I am calling out to women’s NGOs: Why don’t you take to the streets when the sister of a martyr is insulted?” He added, “Whoever starts a sentence with Istanbul Convention should get the strongest reaction from our women.”

Several women’s groups and bar associations immediately criticized his words and signaled that they will not give up on Turkey rejoining the convention. Unsurprisingly, Erdogan’s words breathed new life into the hashtag #IstanbulConventionSavesLives. “The Istanbul Convention saves lives and we are not your women,” tweeted journalist and activist Melis Alphan.

“We will shout this tirelessly in this country where women are harassed and killed in the middle of the street, until the tyrannical and arrogant patriarchy realizes that women are free and equal,” tweeted writer Elif Shafak.

“There have been 159 femicides and 138 suspicious deaths of of women from March 20 — when Turkey announced it was leaving the Istanbul Convention — until November,” Melek Onder, speaking for the We Will Stop Femicides Platform, told Al-Monitor. The total number for 2021, according to the platform’s “monument counter,” is 309 as of today.

The protest in Istanbul follows a mini demonstration by female opposition members of the Turkish Parliament in Ankara during a debate on the budget of the Family and Social Affairs Ministry, which handles women’s issues. Holding purple posters, female deputies from the CHP and Peoples’ Democracy Party (HDP) pledged to bring Turkey back into the convention once they are in power. “No to women poverty” read one poster, while another called for justice for murdered women.

“You have not uttered a single word on the Istanbul Convention and femicides,” an HDP deputy chided the unpopular Family and Social Affairs Minister Derya Yanik. Since her appointment, Yanik has repeated the govermment line that Turkey’s existing laws are enough to protect women from harassment, abuse and death and there is no need for the convention. Her ministry has formulated a five-year action plan that was announced by Erdogan on July 1, the day Turkey’s withdrawal from the convention became official.

According to a survey by MetroPoll, 52.3% of Turks want their country to stay in the convention, including more than a quarter of AKP voters, and 88% of CHP voters, 79% of IYI Party voters and 80% of HDP voters said they opposed the withdrawal decision, while slightly more than a third of  AKP-ally Nationalist Movement Party voters identified themselves as against withdrawing from the treaty.

With early elections increasingly likely, many opposition leaders have started wooing female — and male — voters with promises to reinstate the accord.

Aksener, the sharp-tongued IYI leader, pledged that when she came to power, her first act would be to get Turkey back in the convention. “We will sign the convention before I have my first cup of tea at my new desk,” she dramatically told her party on Nov. 3. “Unfortunately, this government decided to scrap this agreement following the advice of a bunch of Taliban. It is [it] that is responsible for all these femicides.”

A week after Aksener’s words, Kemal Kilicdaroglu, the CHP chair and her electoral ally, announced a six-point plan Nazliaka said was written in consultation with women’s groups. It includes extending state-funded health services for women, creating a special fund to help divorced women escape poverty and securing the rights of homemakers by recognizing homemaking as a profession. But the very first point is to reinstate the accord in his first week in power and to establish a special court to hear cases of gender-based violence and abuse. The latter seems to have been taken directly from the convention as well as the CHP’s promises to train prosecutors, judges and police on gender-based violence.