A decision by Turkey’s Council of State Tuesday opened the way for the nation to withdraw from the Istanbul Convention to prevent violence against women on July 1 despite condemnation from international bodies and women’s rights advocates. 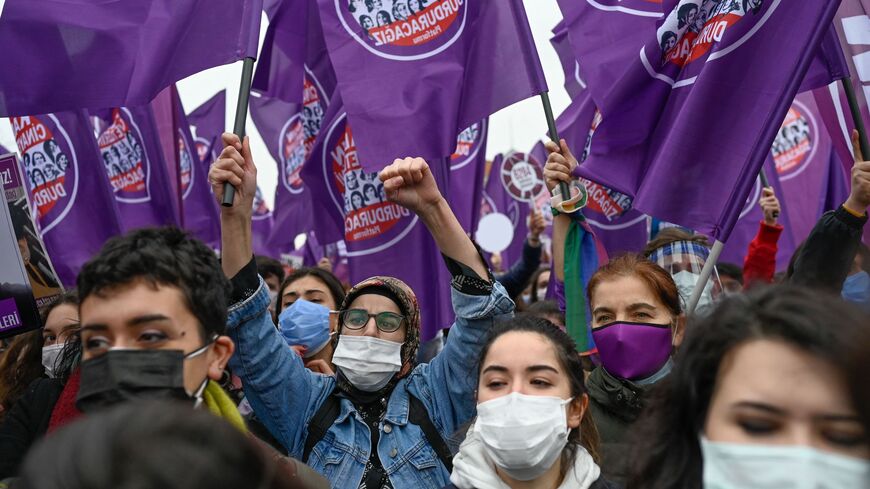 Protesters hold flags reading "We will stop femicides" during a demonstration against Turkey's withdrawal from Istanbul Convention, an international accord designed to protect women, in Istanbul, on March 20, 2021. - BULENT KILIC/AFP via Getty Images

ISTANBUL — Turkey is set to leave the Istanbul Convention to prevent violence against women on July 1 following a decision by the nation’s Council of State Tuesday to reject appeals seeking to reverse the move.

The official withdrawal would come after months of protests by women’s rights advocates and opposition from international bodies, including the Council of Europe the US administration, who claim leaving the convention could deny women, children and the LGBT community in Turkey the legal framework to prevent gender-based violence and prosecute abusers.

A March 20 presidential decree announced Turkey’s withdrawal from the European treaty, making Turkey the first of 47 signatory states to pull out from the convention. In response, a number of rights organizations and the nation’s main opposition parties filed lawsuits to repeal the decision.

On Tuesday, the nation’s Council of State voted three to two to reject the appeals and the Turkish presidency submitted its defense requesting all relevant lawsuits over the withdrawal be dismissed.

The decision clears the way for Turkey’s withdrawal from the convention Thursday despite ongoing opposition from women’s rights group who plan to hold large demonstrations in Turkish cities the same day.

According to the We Will Stop Femicide Platform, at least 189 women have been killed in incidents of gender-based violence so far this year in Turkey, and at least 409 women died under similar circumstances in 2020.

“It’s a huge step backwards and comes at a time when so many women are killed,” Deniz Yuksel, a Turkey advocacy specialist for Amnesty International, told Al-Monitor.

Yuksel said the convention prompted the Turkish Parliament to pass laws supporting protection and prevention mechanisms against gender-based violence, but some legal frameworks were never adequately implemented after Turkey became the treaty’s first signatory in 2011.

“The government takes the fact that gender-based violence has increased in the last decade to mean the Istanbul Convention has failed, but that really isn’t true,” Yuksel told Al-Monitor. “The reality is … Turkey has failed to implement the convention.”

In addition to a rise in reported incidents of gender-based violence in recent years, the Turkish government has claimed measures in the convention to combat discrimination based on gender identity and sexual orientation run counter to traditional conservative norms.

The Turkish presidency’s Directorate of Communications argued in a March 21 statement part of the decision to withdraw from the Istanbul Convention was that it had been “hijacked by a group of people attempting to normalize homosexuality, which is incompatible with social and family values.”

In an apparent effort to replace the treaty, Turkish President Recep Tayyip Erdogan is expected to unveil a national action plan targeting violence against women during an event in Ankara Thursday. The plan was reportedly drafted by the Ministry of Family and Social Services and will outline measures to be implemented over the next five years.

The developments come as reports of gender-based violence and child abuse have circulated widely on social media and in national news this week. Surveillance video footage of a man savagely attacking a woman in a café in the Turkish Aegean district of Soma reflected the ever-present threat of violence faced by women.

Separately, uproar gripped Turkish social media Tuesday after reports surfaced regarding a court ruling earlier this year that released a couple pending conviction who were charged with physically and sexually abusing their children as well as selling them to friends for sex.

Following public outcry, Turkey’s Board of Judges and Prosecutors launched an investigation into the trial, which is taking place in the Antalya province of southern Turkey. Presidential spokesperson Ibrahim Kalin also condemned the news in a tweet Tuesday.

“In this terrible event, it is essential to avoid decisions that may be perceived as tolerating child abuse,” Kalin said, adding, “These horrible people should be given the harshest sentence. We will monitor the legal process for justice.”

The prevention and prosecution of such cases are among the main aims of the Istanbul Convention, Yuksel said, arguing the treaty has been targeted by the Turkish government for political gain. Along with police interventions on LGBT pride marches in Turkish cities this week, Yuksel said Erdogan is attempting to appeal to conservative voters with the convention withdrawal as his support wanes ahead of elections currently scheduled for 2023.

“The ruling party, because of economic circumstances especially, feels politically vulnerable and it feels like it needs all the support it can get … even at the cost of the safety and rights of women,” Yuksel told Al-Monitor.