The murder of a Turkish woman sparks protests across the nation as government officials consider withdrawing from a convention designed to combat violence against women. 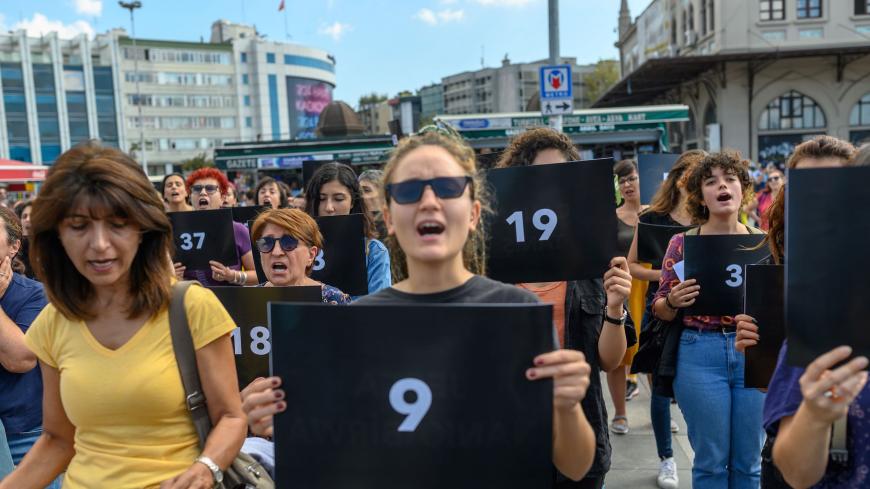 At a protest against gender violence in Istanbul, at Kadikoy on Sept. 28, 2019, women hold signs symbolizing the numbers of women murdered. - BULENT KILIC/AFP via Getty Images

ISTANBUL — Five days after Pinar Gultekin was reported missing, her body was found Tuesday in a forested area in Turkey’s southwestern province of Mugla.

According to news reports, the 27-year-old student was battered and strangled to death by her former partner, Cemal Metin Avci, who has been detained on homicide charges in an ongoing investigation.

The murder is one of nearly 120 femicides recorded in Turkey so far this year, according to the civic group We Will Stop Femicide Platform, and women’s rights advocates organized nationwide protests Tuesday claiming the state was not doing enough to deter gender-based violence.

The events come at a time when violence against women is a frequent topic in national headlines as the Turkish government debates making amendments to the Istanbul Convention, a set of laws designed to combat gender-based violence.

Conservative groups have been lobbying lawmakers to alter the convention, saying it negatively impacts families, but civil society groups are condemning such motives, claiming current laws must be better implemented to stem a rising number of femicides in recent years.

“The one who is responsible for the murder of Pinar Gultekin is not the only perpetrator, [it's] also those who open the Istanbul Convention for debate,” Gulsum Kav, a spokesperson for the We Will Stop Femicide Platform, told Al-Monitor.

She added, “What was done to her should be considered as done to all women, and with this painful lesson, the debate over the convention should come to an end. We will do our best to draw the lesson from this pain and to assure that all the articles of the convention are implemented.”

Gultekin’s murder comes after ruling Justice and Development Party (AKP) Deputy Chair Numan Kurtulmus said the Istanbul Convention was “really wrong” in a July 2 television interview, claiming its impacts on gender and sexual orientation had “played into the hands of LGBT and marginal elements” in Turkish society.

Introduced in 2011, the Istanbul Convention was first ratified by Turkey in 2012 and has since been signed by 45 countries along with the European Union in an effort to address violence against women and provide resources to protect abuse victims. The convention led to the passing of Law 6284 in Turkey, which established legal mechanisms to combat gender-based violence and discrimination.

Now, a growing chorus of conservative groups is seeking to repeal some of the protections established by the convention, arguing it has led to increased family separation and infringements on traditional cultural norms.

“It’s not a large group, but it’s influential with the government,” Melis Alphan, a Turkish journalist, told Al-Monitor. “The government is also concerned with the divorce rate.”

She added, “When you put family first, you push violence into the home and push the safety of women and children into a secondary position.”

Though Ankara’s adoption of the convention was seen as a step toward preventing violence against women, civil society groups have maintained that measures put forward in the law were not fully implemented. The result is that gender-based violence remains a constant fixture in news headlines in Turkey, where 416 femicides were recorded in 2019, up from 143 in 2012 when the convention was ratified.

In March 2018, Turkey’s Interior Ministry and Ministry of Family, Labor and Social Services created a mobile application to report male violence called KADES. Since its establishment, 30,601 reports of violence have been filed through the app, about 38 per day, according to a July 20 statement by opposition Republican People’s Party Vice Chair Gamze Akkus-Ilgezdi.

Meanwhile, other high-profile cases of gender-based violence remain in headlines, such as the whereabouts of Gulistan Doku, a 21-year-old student who went missing Jan. 5, 2020, and whose search has prompted authorities to drain a lake in Turkey’s eastern province of Tunceli.

While debates continue over the Istanbul Convention, Turkish officials said the state will continue to prosecute perpetrators of gender-based violence to the fullest extent, including the latest case involving Pinar Gultekin.

"The sorrow of our daughter Pinar Gultekin, who was massacred in Mugla, has pierced through our hearts," Zehra Zumrut Selcuk, Minister of Family, Labor and Social Services, said in a tweet, adding the ministry would "intervene in the case and closely follow the ensuing judicial process so that the murderer will get the heaviest sentence possible."