Turkish women's rights groups have denounced a bill that would reduce sentences for sex offenders and other convicts to stem the spread of the novel coronavirus in prisons. 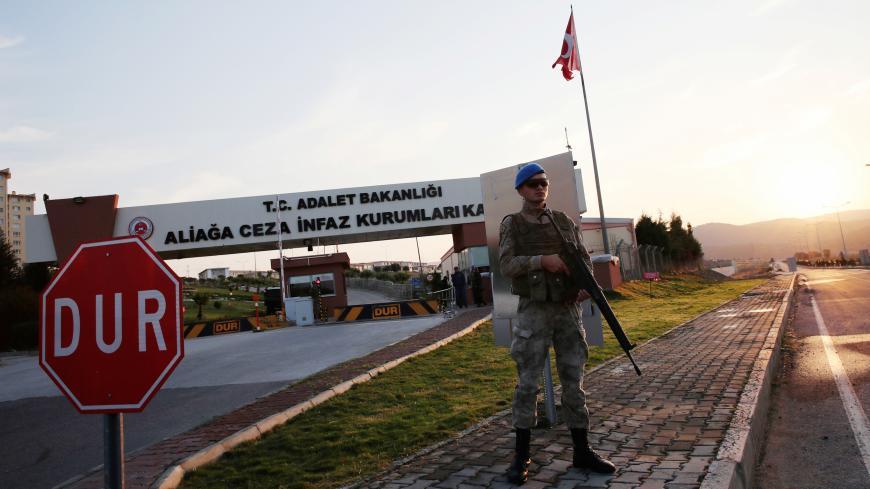 ISTANBUL — As the coronavirus pandemic continues worldwide, Turkish authorities are drafting measures to reduce the nation’s prison population in an effort to stop the disease from spreading among inmates.

On Tuesday, lawmakers with Turkey’s ruling Justice and Development Party and the allied Nationalist Movement Party submitted a law proposal to opposition party members that would release about 100,000 of the nation’s 300,000 inmates, switching select convicts’ jail sentences to extended probation periods to relieve overcrowded penitentiaries.

The measure has drawn sharp criticism from women’s rights groups, who note the draft law would reduce punishments for sex offenders and convicts of gender-based violence, potentially endangering women, children and victims of domestic abuse across Turkey.

Gulsum Kav, a spokesperson for the Istanbul-based We Will Stop Femicide Platform (Cinayetleri Durduracağız Platformu), said reports of domestic violence have increased in recent weeks as women are stuck indoors with abusive family members amid the coronavirus pandemic, and that releasing offenders would only worsen Turkey's circumstances.

“As we’re trying to take precautions to reduce violence against women in this pandemic, this draft law is doing the complete opposite and we find it absolutely unacceptable,” Kav told Al-Monitor.

A copy of the draft law obtained by Al-Monitor includes protocols that would conditionally release nonviolent offenders who have completed half of their sentences, though such measures were not extended to political prisoners or those convicted of terrorism and murder.

The proposal would release prisoners convicted of sexual assault, gender-based violence and drug trafficking who have completed two-thirds of their sentences, a shift from current laws that bar the release of such convicts before they complete at least three-fourths of their sentences. Those released would complete their sentences outside prison walls through an extended probation period.

“The reduction is legitimizing these actions by men and this draft law will increase violence against women,” Tuba Torun, a lawyer focusing on women’s rights issues in Turkey, told Al-Monitor.

She added, “I received many messages from women who say they are terrified because the fathers, brothers and partners that used violence against them will be released and they could come back and continue that violence.”

Coronavirus cases have surged in Turkey. As of Wednesday, 1,872 confirmed cases and 44 virus-linked deaths were recorded in the country, which has seen a steep rise in infections since the first case was announced two weeks ago. On Tuesday, Turkey's first inmate with the coronavirus was diagnosed in Ankara’s Sincan prison and has since been transferred to intensive care.

“The draft law will apply to certain crime groups. For example, mafia leaders like Alaattin Cakici will be released,” Eren Keskin, a prominent lawyer and co-chair of Turkey’s Human Rights Association, told Al-Monitor. “Whereas Demirtas, who is in prison for his opinions, will remain.”

She added, “This is a violation of all the international conventions to which Turkey is a party.”

Turkey has suffered a rise in femicides in recent years, punctuated by the murders of Sule Cet, Emine Bulut and Ceren Ozdemir. The spate of killings drew women’s rights defenders to condemn a judicial system they felt was negligent in prosecuting perpetrators of sexual assault and gender-based violence.

In response, Ankara has set in motion various judicial reform packages that seek to address various legal shortcomings. While some reforms improve protections for minor victims of crime, Kav said the draft laws introduced as part of the coronavirus response would undermine recent progress in the judicial system.

“In January and February, we started to see the possibility of a decrease in femicides and violence against women, and we were hoping to see an improvement in laws protecting women,” Kav told Al-Monitor. “But in all extraordinary times such as war, natural disasters or economic crises, women always pay the price, because violence increases in periods like this.”

Kav said there is no data regarding the impact of self-isolation measures on gender-based violence in Turkey, but figures from China showed domestic abuse rose threefold when families spent extended quarantine periods in their households.

“One of the most dangerous places for women is the home,” Kav told Al-Monitor.

Kav added that victims can report incidents to local support groups and encouraged women who feel threatened in Turkey to use digital applications such as KADES to report domestic violence.