Human rights advocates are calling for improved measures to protect families as urban curfews and a controversial prisoner release have led to increased assaults and domestic violence reports in Turkey. 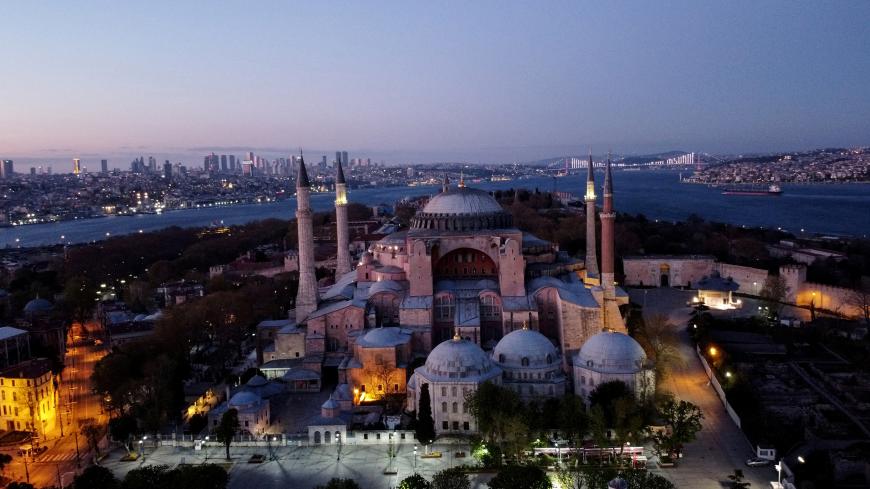 An aerial view of the Byzantine-era monument of Hagia Sophia on the first day of the holy month of Ramadan, during a four-day curfew which was imposed to prevent the spread of the coronavirus disease (COVID-19), in Istanbul, Turkey, April 24, 2020. - REUTERS/Umit Bektas

ISTANBUL — Domestic violence hotlines have been strained in Turkey amid the novel coronavirus pandemic as many families spend more time indoors, in line with protocols to stem the spread of the disease.

She said the rise comes as the police emergency number, 155, has been reportedly overburdened and the KADES mobile app, a state system used to report domestic and gender-based violence, is also facing service blackouts.

“Before the coronavirus, Turkey did not have strong mechanisms to combat domestic violence and now this crisis is overburdening some state systems and putting families at risk,” Gullu told Al-Monitor.

Women’s rights advocates say the rise in violence is not only being spurred by a string of urban curfews, which lock families in close quarters with potentially abusive relatives, but may also be the result of a prisoner-release bill passed on April 13 to reduce jail populations and curb the spread of COVID-19 in state penitentiaries.

Up to 90,000 prisoners are being released in Turkey as a result of the measure, and many convicts are returning to their family homes, possibly moving back in with the victims of their original crimes.

Though the release excluded murderers and rapists, it freed violent offenders and because the Turkish legal code does not include a specific charge for violence against women, domestic abuse incidents have a high probability of reoccurrence, Gullu said.

“These people should not have been released and violence against women should be defined in the Turkish criminal code,” Gullu told Al-Monitor. “Yesterday, we heard a woman was killed by a man who was released from prison.”

Under current state protocols, prosecutors normally inform family members of a prisoner’s release shortly before the measure is taken. The short notice has led to several incidents of repeated domestic abuse, including one in Ankara Saturday, when a released inmate attacked his wife and took their children hostage with a firearm before police intervened. In a separate incident, a released convict killed his son with a hammer in western Turkey.

Some advocates say punishments for domestic assault may be too mild to deter violent offenders. In a high-profile incident unrelated to the prisoner release, a recent convict killed his 10-year old daughter after finishing a prison sentence of 5.5 months for stabbing his wife with a knife and screwdriver.

Yet Cansu Sekerci, a lawyer with Turkey’s Civil Society in Penal System Association, said current research does not reveal a correlation between longer prison sentences and a reduction in violent crime. Instead, she said the Turkish justice system lacks rehabilitation programs to reduce prisoner re-entry.

“We need an individualized approach that reflects restorative justice,” Sekerci told Al-Monitor. “This approach takes into consideration the prisoner, the society and the people who are harmed due to crime.”

Turkey’s Justice Ministry reported more than 80 prisoners have been infected with the novel coronavirus and three have died since the disease was first recorded in Turkey on March 11. About 79 prison employees have also tested positive for COVID-19.

Balancing measures to stem the virus spread in state penitentiaries with increased reports of domestic violence is an issue with few immediate remedies. Eren Keskin, a prominent lawyer and co-chair of Turkey’s Human Rights Association, said strict laws to deter violence against women exist in Turkey but are not fully implemented.

“We see that the courts, most of which are not working nowadays, refrain from giving restraining orders for perpetrators of violence, which leaves women completely vulnerable,” Keskin told Al-Monitor.

She added, “And with these calls to stay home, we see an increase in violence against women because women have nowhere else to go. There are very few women’s shelters in Turkey.”

About 470 women were killed in Turkey last year, and half were murdered by their husbands, partners, exes or male relatives, according to the We Will Stop Femicide Platform. In March 2020, the group reported 29 femicides and nine suspicious female deaths in Turkey.

As of Monday, the Turkish Health Ministry has recorded 112,261 confirmed COVID-19 cases in the country, and 2,900 virus-linked deaths.