Why women’s shelters in Turkey no longer provide safety

The high-profile domestic abuse case of a popular actor shows violence against women is accepted, and even defended when it comes to powerful men. 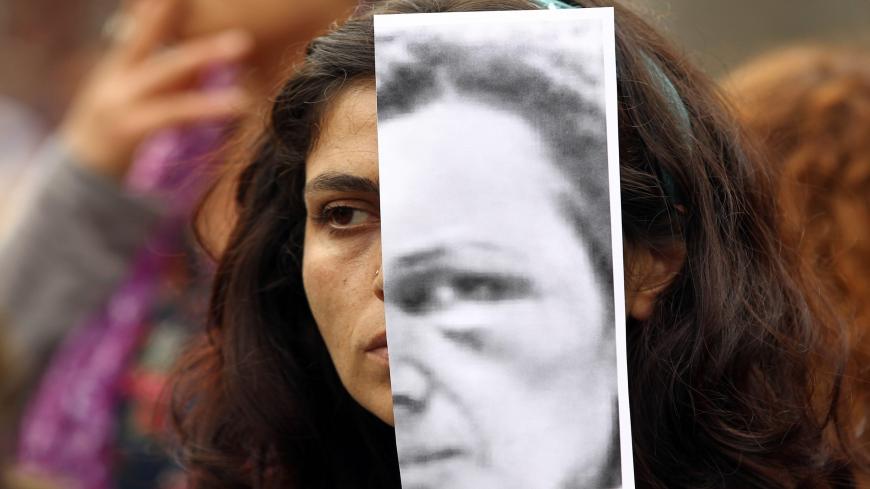 Turkish women display photographs of slain student, Ozgecan Aslan, who was killed while resisting an attempted rape, and other victims of violence against women during a demonstration, Ankara, Turkey, June 12, 2015. - ADEM ALTAN/AFP via Getty Images

With his piercing blue eyes and a habit of baring his front teeth when angry, Ozan Guven might well be one of the most charismatic actors of the Turkish screen. Known for his portrayal of ambitious, hot-tempered and abusive characters in two of Turkey’s top-rated soaps — “Phi” and “Magnificent Century” — Guven became headline news in July when his girlfriend, Deniz Bulutsuz, filed a case against him for violence and physical abuse. Guven may face up to 13 years of imprisonment.

“So Guven is Can Manay after all,” said one tweet, referring to the main character in the Turkish series “Phi,” where the antagonist, a smooth-talking psychiatrist, eventually reveals himself to be a psychopath with a history of abuse, violence and even femicide.

The Turkish opinion remained divided as Bulutsuz unfolded photos of her bruises, a black eye and a testimony that said that she had been slammed against a wall by Guven. Women’s activists and a group of screenwriters called on production companies to blacklist Guven, while others, mainly male groups, accused Bulutsuz of lying and charged Guven’s critics of lynching the actor with nothing yet proven. Melis Alphan, a journalist and a longtime advocate of women’s rights, faced a steady flow of online abuse when she tweeted that members of the film sector should stop working with Guven.

“When it is a man with power, fame and with fans, they rally to his side and insult the victim or anyone who supports her,” Alphan told Al-Monitor. “I used to advocate education to combat gender-based violence, but I can no longer say that — there is so much abuse against women in academia too.”

Mor Cati (Purple Roof Women's Shelter Foundation), which has provided counseling, and psychological and legal support to violence victims since the1990s, said in a statement that the case had been emblematic for domestic violence victims. “It is becoming visibly more difficult for women to speak about the violence they face. Women who talk of what they have experienced are accused of lying or of deserving what happened to them. Unfortunately, we live in a world where there are men who use violence against women and then deny it — and a public opinion that believes them,” said the association’s statement published July 7.

The Purple Roof called on women to protect their rights under Turkey’s laws and the so-called Istanbul Convention, the major Council of Europe accord that protects women from violence and abuse, which the government signed in 2011 and ratified in 2012. The call came amid calls by some members of the ruling Justice and Development Party (AKP) that the ratification has been a mistake and the government should withdraw from the accord that they claim protects the LGBTI community and relationships outside marriage.

On the weekend of July 10-12, women from all over Turkey took to the streets to call for ending femicide, stop sexual abuse of children and uphold the convention and Turkey’s law on preventing violence against women, known as Law No. 6284.

The convention — whose full name is the Council of Europe Convention on Preventing and Combatting Violence Against Women and Domestic Violence — is named after Istanbul, because it was presented to the signatories in a meeting in the city. Turkey was the first country to sign the accord, which says the state is responsible to prevent all forms of violence against women, train police and justice officials on victims’ rights, and work with nongovernmental organizations on the issue.

On July 2, Numan Kurtulmus, vice chair of the AKP, said in an interview that signing the accord had been a mistake. In a televised interview, Kurtulmus indicated that the government might consider withdrawing from the convention, saying that the accord has played into “the hands of LGBT and marginal elements” — adding to the homophobic statements by the government and top officials.

Though other top brass of the AKP made similar noises on regretting the signing of the accord in the past, Kurtulmus’ words brought the issue of withdrawal at a time that women’s groups raised their voices on the increase of domestic violence in light of the coronavirus lockdowns and lack of adequate measures, such as new helplines or a quick reaction by police and shelter officials on complaints of violence.

Women’s associations and female politicians — including AKP deputies — raged against Kurtulmus. Burcu Karakas, a journalist and a nonresident scholar at the Middle East Institute, tweeted her outrage, saying, “Why bother with official statements such as ‘withdrawal from the convention’? Why not say, simply and plainly, that you want to marry underage girls and beat up women?”

President Recep Tayyip Erdogan, who was prime minister when the accord was ratified, remained noncommittal, at least for the time being. According to Hurriyet daily, he simply asked his team to study it and see what the concerns are.

Ankara observers cheekily point out that the president is stuck between two strong stakeholders — the Ismailaga Congregation, a powerful and conservative group that strongly opposes the accord, and his wife and daughter who support it. According to Anka-Review, an Ankara insider, several female activists told the newsletter on condition of anonymity that they believe that Sumeyye Erdogan, the president’s daughter and co-chair of women’s association KADEM, is the “guarantee” that Turkey would not withdrawn from the accord as she had strongly supported it in the past.

“The Istanbul declaration would not be easy to discard, as many women — including the conservative ones — were supporting it when it was signed. No one wants to see women killed in front of their children,” Melek Onder of We Will Stop Femicide Platform, told Al-Monitor. “The opposers are a vocal group, but they are a very small one.”

“We should not even be debating withdrawal from the convention,” Alphan said. “Given the situation on the ground, we should be reflecting on how we can implement it better.”

Even with the accord in place, women’s groups claim that the government is far from vigilant on protecting women from violence or death. The Ministry of Interior Affairs has claimed that the number of femicides has decreased in Turkey in the first half of 2020 compared to last year, declining from 173 to 115. But several femicides reported by the press revealed that women who have asked for protection had not been given that, including one woman who was killed by her husband after he found her at a women’s shelter.

In July, Zeynep Topal, a 27-year-old mother of two from Bingol, traveled from her small town to Istanbul to seek refuge in a women’s shelter, only to be found by her husband and taken home. A few days after her departure from the shelter, she was found dead in a backyard in Bingol, shot with her hands tied behind her back. Her husband, Osman Topal, was arrested along with two relatives who are believed to be accomplices.

A month earlier, as Turkey was in lockdown, an unnamed woman went to a police station and was sent to a shelter, again according to a statement by Purple Roof. However, the officer at the police station, who is a friend of her husband, shared the address of the shelter with him.

Onder said that the coronavirus lockdowns, when women were forced to remain at home with violent husbands or simply leave home in a hurry, had shown how inadequate the shelters have been. “Under the law, municipalities with more than 100,000 inhabitants should have a shelter,” she said. “Few of them do.”

The July 7 statement by Purple Roof also stated that the 144 shelters for women throughout the country are too few, and that some shelters do not provide women with “emotional, social and legal support” but seek to unite families instead. “[Some of the efforts of the shelters’ officials] to get those women to reconcile with the very people who abused them can cost these women their lives,” said the statement. “This approach, which puts family unity before the safety of women, needs to end.”