The Turkish minister of family and social affairs' description of a domestic violence uptick as “tolerable” is seen as emblematic of government efforts to underestimate gender-based violence and femicides in the country. 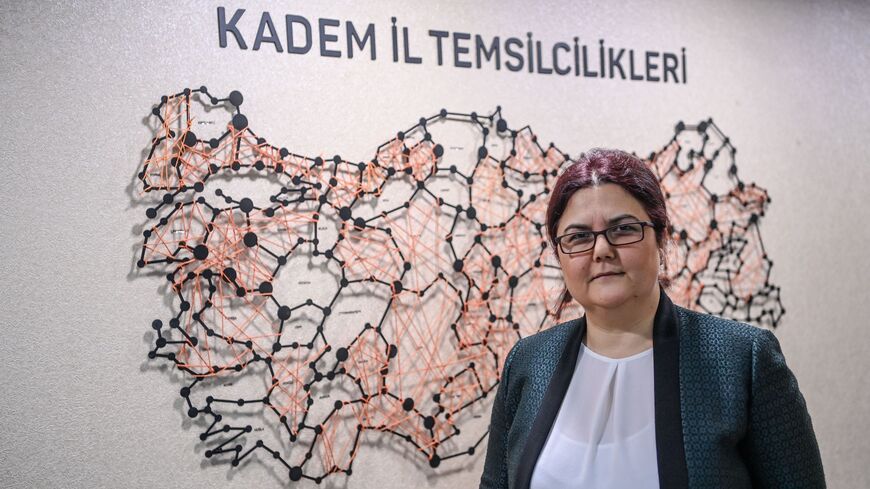 Turkey’s Minister of Family and Social Affairs Derya Yanik poses for pictures during an interview at the Muslim feminist group Havle's headquarters in Istanbul on March 23, 2021. - OZAN KOSE/AFP via Getty Images

Ever since she took office in April as part of a mini cabinet reshuffle, Derya Yanik, Turkey’s minister for family and social affairs and the only woman in the cabinet, has been causing a stir among rights activists, from women’s groups to children rights advocates. The last straw came when the minister was quoted as saying that the increase in gender-based violence in the early days of the COVID-19 pandemic in March 2020 was “tolerable” — a remark that sparked protests calling for the minister’s resignation outside her ministry’s local branches in Istanbul, Ankara and Diyarbakir May 25.

Speaking at a parliamentary commission tasked with studying the root causes of domestic violence May 20, Yanik said, "The number of violence cases against women was 19,582 in January 2020, which increased to tolerable levels in February and March [21,457 and 22,022, respectively] and showed a significant drop in April.”

The chart she displayed showed a decline in domestic violence records in April 2020, then a sharp surge when restrictions were relaxed. According to Interior Ministry data, complaints of domestic violence increased to 28,856 in June, when lockdown measures were relaxed, from 18,414 in April, when the nation was largely at home.

“During the pandemic lockdown, women said they faced difficulties in seeking help or accessing helplines, so yes, our findings also show a decline in complaints,” Melek Onder of the We Will Stop Femicide Platform told Al-Monitor.

The first COVID-19 case in Turkey was officially announced in mid-March last year and many businesses were closed down for three months. “The complaints surged as soon as anti-pandemic measures were relaxed and it became possible for women to file complaints or request injunctions to keep violent spouses away,” Onder said.

Onder’s platform as well as thousands of politicians, activists and women called for Yanik’s resignation on social media with the hashtags #WeWontTolerate and #DeryaYanikResign, rapping the minister for classifying the violence uptick as “tolerable.” A major confederation of trade unions called for protests on May 25 to urge the minister to step down.

According to Yanik, a lawyer by profession, her words were taken out of context. “This was a deliberate distortion of my words,” she tweeted May 22. “As a woman and a lawyer, I have always stood against gender-based violence. As the minister of family and social affairs, I operate with zero tolerance for violence. It is clear that I use the term ‘tolerate’ for a statistical explanation.”

So why did the minister’s assurances fail to calm the waters and stop the demonstrations for her resignation?

The first and most obvious reason is the minister’s past record of clumsy statements since she took office. The other is that many women believe that Yanik’s latest remark is emblematic of efforts by the ruling Justice and Development Party (AKP) to underestimate, ignore or deny the gravity of gender-based violence and femicides in Turkey, coupled with misogynistic and derogatory statements toward women that encourage abuse.

The controversy has grown since March 10, when President Recep Tayyip Erdogan announced Turkey’s withdrawal from the Istanbul Convention, a Council of Europe accord that holds states responsible for preventing and combatting violence against women.

“Minister Yanik’s statement is in line with the general AKP narrative that violence against women has not increased but only become more visible in recent years,” journalist Melis Alphan, a women’s rights activist, told Al-Monitor. “Her statement was, of course, blunter than what we often heard from her predecessors. The issue is not about how many women are being killed, but the fact that women are being killed because [state] measures to protect them aren’t working.”

Yanik’s predecessor, Zehra Zumrut Selcuk, sparked another controversy in September when she argued that not all murders of women fell into the femicide category. Speaking on CNN Turk, she suggested that some civic groups were inflating the femicide toll by counting irrelevant incidents in.

Her remarks outraged the We Will Stop Femicide Platform, which runs an online “monument counter,” updated daily to commemorate women who fall victim to domestic violence. It tallies 409 femicides in 2020 and 162 so far this year, based on information provided by a nationwide team of activists, lawyers and women’s councils.

The platform rejected Selcuk’s claims, stressing that its reporting on the issue since 2010 has meticulously distinguished between femicides, unsolved murders, suicides and cases where women are pushed to suicide. “We explain each femicide, providing names and case history," the statement read, adding that the Interior Ministry failed to provide a transparent explanation of its own lower figures.

Shortly before she lost her post, Selcuk highlighted alcohol consumption — one of Erdogan's pet peeves — as a cause of violence against women. "Violence has many causes, such as alcohol and addiction. We are too concerned about a text to have a genuine debate on the root causes of violence against women,” she said. The text she was referring to was the Istanbul Convention. Turkey’s domestic laws are “fully equipped” to fight domestic violence, Selcuk said, echoing a statement by the presidential information office on Turkey’s withdrawal from the convention.

Council of Europe Secretary-General Marija Pejcinovic Buric warned Turkey — and other members mulling withdrawal such as Poland and Hungary — that crafting national legislation to ban violence against women would not be enough. “The standards for the protection of women set by the Istanbul Convention are significantly higher than the national laws of many countries,” she said, citing independent monitoring mechanisms and international cooperation to bring perpetrators to justice.

On May 11, the 10th anniversary of the Istanbul Convention, politicians from 16 Council of Europe countries appealed to Turkey to reverse its decision to quit, which will become effective July 1.

The We Will Stop Femicide Platform vowed May 14 to continue its fight to keep Turkey part of the convention through all legal means possible. “The overnight withdrawal from the Istanbul Convention shows the degree of lawlessness in Turkey,” the platform’s spokesperson, Gulsum Kav, told a press conference attended by Al-Monitor. “We will extend our battle to all groups who need justice, including the LGBTI and children.”

Her reference to children was not without reason. On April 23, which Turkey celebrates as Children’s Day, Yanik raised eyebrows when she shared that the child she invited to the ministry — a tradition observed by ministries and other public institutions — was under state protection, an issue that is normally kept confidential in the case of minors.