A lawsuit threatens to silence Turkey's main voice on violence against women, the We Will Stop Femicides Platform. 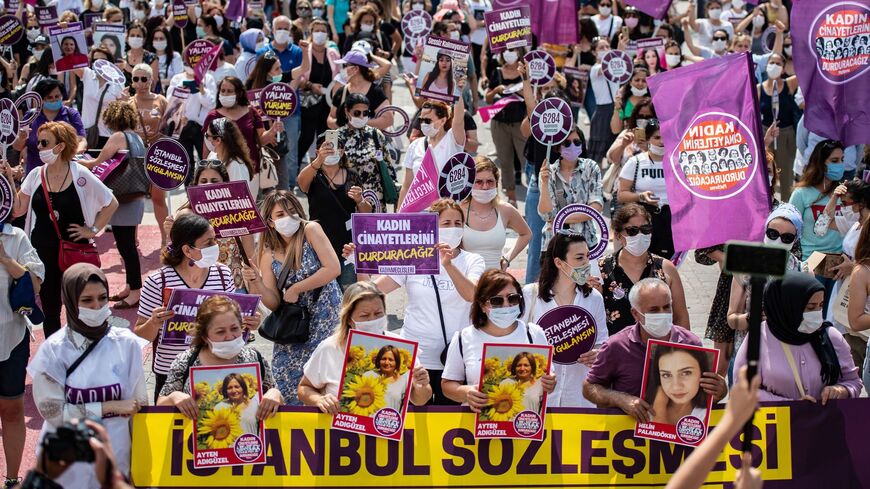 Demonstrators wearing protective face masks hold placards and portraits of women during a protest organized by the We Will Stop Femicides Platform and Women's Assemblies calling for better implementation of the Istanbul Convention and turkish law to prevent violence against women, in Istanbul, Turkey, July 19, 2020. - YASIN AKGUL/AFP via Getty Images

Turkey’s most prominent women’s rights group is facing a legal fight for survival after prosecutors demanded its closure for acting “against morality” and undermining the “family structure.”

The We Will Stop Femicides Platform has battled for 12 years to highlight high levels of violence against women in Turkey and what it says is official ambivalence to the murder of women.

The group has been served with a lawsuit demanding its closure for “acting against the law and morality,” it said in a statement Wednesday. The case is built on complaints “that are not based on any concrete facts,” it read. They include the claim that the group “tears down the family structure by ignoring the concept of family under the guise of defending women’s rights.”

The statement went on, “Trying to make up crimes against us with these unlawful and baseless allegations is deplorable even in terms of the current legal order.”

The platform has risen to prominence through protesting violence against women and releasing monthly reports on murders and suspicious deaths.

The killing of women, usually at the hands of former boyfriends, husbands or male family members, makes near near-daily headlines in Turkish newspapers.

On the day the case against We Will Stop Femicides was announced, a 22-year-old woman who had traveled to the western city of Izmir to see her children was found strangled to death. Her ex-husband and several of his family members have been arrested.

Last year the association recorded 280 femicides, defined as the “intentional murder of women because they are women,” and 217 suspicious deaths. In the first three months of this year, it counted 73 femicides and 68 suspicious deaths.

The platform has also been one of the most vocal groups in criticizing the government’s withdrawal from the Istanbul Convention last year and organizing demonstrations across the country. The convention, a Council of Europe agreement on tackling violence against women and domestic violence, was ratified by Turkey in 2012.

Providing legal advice to domestic violence survivors and monitoring trials are other aspects of the platform’s activism.

“What were those who sued us with such groundless allegations doing when there were so many murders and so much violence against women in the country?” Melek Onder, spokesperson for the platform, told the Mezopotamya news agency. “If they had done their duty fully and effectively, we wouldn’t have had to struggle so much. … If they had done their duty, hundreds of women could still be alive today.”

She added, “The government declares everyone who does not belong to it, live like it or think like it to be immoral and a terrorist.”

The case against the platform comes more than a year after the parliament, which is dominated by the ruling party and its allies, passed a law imposing restrictions on civil society groups. While ostensibly aimed at tackling terrorism financing, most of legislation curtails the independence and activities of nongovernmental organizations.

The governing Justice and Development Party has often come under criticism over its attitudes toward women, usually framed through the lens of women’s roles as mothers and wives.

President Recep Tayyip Erdogan has said, “A woman who denies her motherhood, who gives up on looking after the home is incomplete, is only half,” and has called on young couples to have at least three children. Defending the repeal of the Istanbul Convention, he has said existing laws are sufficient to protect women.

Tarik Beyhan, campaigns and communications director at Amnesty International’s Istanbul office, told Al-Monitor that movements such as We Will Stop Femicides have emerged as the “most effective and powerful movements in Turkey.”

The closure of the platform will have “disastrous consequences for millions of women and girls” and lead to a rise in attacks on women's rights groups, Beyhan said, as well as resulting in other areas of civil society being targeted.

The closure case drew widespread support for the organization on social media.

“Why would you want to punish those who are against the murder of women?” wrote actress Berna Lacin. Best-selling author Elif Shafak tweeted, “There are brave people in this country who are trying so hard so that more women are not killed and those who perpetrate violence against women do not go unpunished.”