Lebanese nongovernmental organizations and artists use videos to create awareness of the risks of early marriage, which affects 6% of all girls in Lebanon. 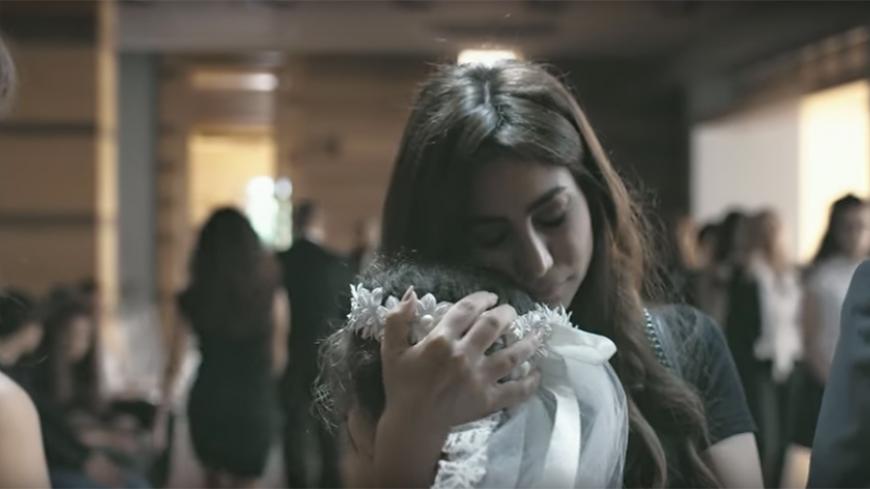 This still is from a video released by the Lebanese feminist nongovernmental organization Kafa that aims at raising awareness of the issue of child marriage. - YouTube/Kafa Lebanon

People with grim faces and black clothing stand in line as they wait their turn to shake hands in a video called “A Wedding or a Funeral” posted by Kafa (Enough), a Lebanese feminist nongovernmental organization (NGO). Toward the very end, a glimpse of a child bride is seen near the adult groom. The message is clear: Marrying a child is burying her dreams, her hopes and ambitions. It is not a wedding party, but the funeral of a girl’s future.

The video is part of the new campaign by the same name launched by Kafa on July 10, and it continues the organization's efforts that started in 2015 to end early marriage.

Around 6% of girls in Lebanon are married before their 18th birthday, according to UNICEF data. The numbers have increased with the massive arrival of Syrian refugees in the country.

Kafa’s “Raise the Age” national campaign aims to push the parliament to pass a new law that prohibits women from being married before they turn 18. The NGO also seeks the removal of two penal code articles. One, Article 505, allows rapists to marry their underage victims and the other, Article 522, allows rapists to escape penalties if they marry the victim.

In Lebanon, there is no legal minimum age for marriage. Confessional personal status laws, which encompass all the religious rules related to marriage, inheritance, divorce and custody within a confessional community, enable girls older than 15 to get married. On April 15, Human Rights Watch published a statement that read, “Early marriage can have dire lifelong consequences, often halting or harming a girl’s ability to realize a wide range of human rights." The statement also said, "Girls who marry early are more likely to leave school and are at heightened risk of marital rape, domestic violence, poor access to decent work, exploitation, and a range of health problems due to early childbearing.”

Kafa has been battling early marriage through videos with strong images and catchy titles. Its video, “Legally Bride,” (2015) won several international awards and went viral. A hidden camera filmed two actors taking wedding pictures on the famous Corniche in Beirut. Curious and often infuriated passersby watched or tried intervening, asking the young girl if she wants to get married and questioning her older "husband." It was obvious that many who stopped in their tracks were not aware that marrying a minor is allowed in Lebanon.

In Kafa's next video, “Raise the Age,” the young actress from “Legally Bride” and other girls sent straightforward messages about their legal rights, including, “According to the law, I can’t drive," "My signature is not legal yet," "I am not allowed to stay up late," "A child like me is not allowed to work," "I can’t watch movies rated 18+" and "At this age I don’t want anyone to call me Mom!”

“We were already working on the ground to fight child marriage through awareness sessions, especially in the Bekaa Valley where there are many Syrian refugees, with Lebanese and Syrian parents and teenagers,” Maya Ammar, Kafa’s communications officer, told Al-Monitor.

She said, “We realized that no matter what we do, early marriages will not stop until a law forbids them, so we decided to campaign. The first video was just meant to inform people about the situation, while the second one was more personal and a call for the parliament to pass a law that sets the age of marriage at 18, which corresponds to the legal age of full responsibility. The last video is a reminder for the members of parliament — who just prolonged again their mandate for another year — that the problem of early marriage still exists and that legal action is mandatory. We did it right after many religious leaders intervened publicly to say early marriage is OK, and so many people who used to support us preferred to believe them.”

Ammar said the problem lies “with religious institutions that make people think personal status laws are sacred and the state doesn’t want to intervene.” In March, a draft law that would set the minimum age of marriage at 18, prepared by the local NGO Lebanese Women Democratic Gathering, was introduced by parliamentarian Elie Kayrouz. But it has not been put on the parliament's agenda.

Artists are also tackling the issue of early marriage. In April, filmmaker Khalil Zaarour released the film “Nour,” which is the story of a young girl married off by her family to the wealthiest man of her village.

Zaarour told Al-Monitor, “With my films I try to help Lebanese society change — like with my documentary fiction film “Malaki,” which portrays those who disappeared during the civil war. This time I met with girls who married at a young age and Nour’s story is based on their testimonies. The girls were mostly forced by their parents and they regret their parents’ decision. They told me they would rather see their daughters die than do that to them, too.”

Zaarour invited members of parliament to the screenings of the film, and he plans to screen the film in schools and villages in remote rural areas in October. Awareness sessions run by AFEL, an NGO that specializes in child protection, will accompany the screenings. “Many people don’t know that early marriages exist in Lebanon, so I hope my film will help change people's mindsets and make lawmakers act to prevent child marriage,” Zaarour said.

Ammar said, “Any artwork is very effective to advocate a cause. Videos remind people in an efficient way about issues and they can also be used as an interactive tool in awareness sessions.”