Instead of focusing on the AKP's stances on women's rights issues, the secular press has vilified Sare Davutoglu, the prime minister's wife and a medical doctor. 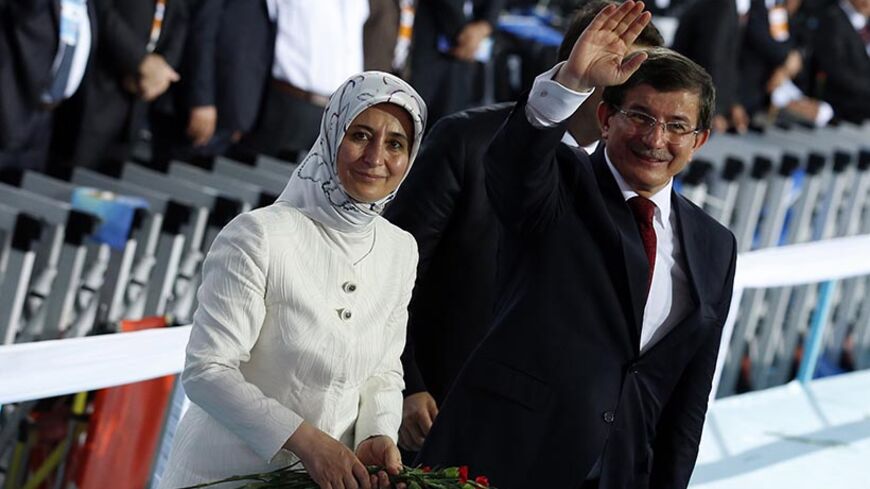 One Aug. 26 news article read, “Madrasa disciple Dr. Sare Davutoglu, MD, advocates fatwas in medicine.” This odd news was promptly picked up by other media outlets, angry bloggers and shared on Twitter. All of these comments mocked the wife of Turkish Prime Minister Ahmet Davutoglu, some of them quite offensively.

The “news” informed readers that Sare Davutoglu, a gynecologist, is popular among Islamist circles. Turkish President Recep Tayyip Erdogan’s daughter is one of her high profile patients. She practices medicine in her private clinic as well as at a hospital in Istanbul. So far, so good.

We are told that the new first lady is a fan of the madrasa education system — implying she does not care for modern medicine, that she believes vaccinations turn patients into pigs and monkeys, that Islamic rulings can provide insights into medicine and that she is anti-abortion. The news in the secular media opened the debate over how she does not shake hands with men, while conservative news outlets preferred to ignore these issues completely. Several commentators on social media — already resentful of the ruling government's policies — did not question the reports' validity and the bizarre lynching of Sare Davutoglu started.

Followers of Al-Monitor’s Turkey Pulse may remember that several pieces analyzing why and how pro-Justice and Development Party (AKP) media and Twitter users target journalists — particularly women — actors, scholars and any other member of the opposition. It cannot be overestimated how greatly Erdogan has contributed to witch hunts becoming politics as usual. Yet there is another side to the story, one in which the Islamists — again, mostly women — become the victims.

Having followed Prime Minister Ahmet Davutoglu since the early 2000s as a scholar of international relations, I did not see a single photo of Sare Davutoglu or their children in the news until 2009, when Davutoglu became foreign minister and his wife attended the ceremony at the parliament. I could not see Sare Davutoglu even then, because she and her daughter were photographed covering their faces with their hands. She is known as a quiet, reserved woman who avoids the spotlight.

Sare Davutoglu is now facing a different form of attack from those against former first ladies Hayrunnisa Gul and Emine Erdogan. The headscarf used to be the sign of a submissive, uneducated, backward Islamist wife figure in prejudiced minds, yet Sare Davutoglu is none of those. Indeed, she and her husband make a “power couple” rarely seen in Turkish politics.

Even to those less well versed in Turkish politics, a comparison of photos of Sare Davutoglu with those of former first ladies would reveal immediate differences. Sare is a slender, petite figure with a clearly reserved attitude, little make up and neutral toned outfits. It would be fair to conclude she lives by her beliefs, and she is a fresh reminder to all observers of Turkey that political Islam does not come in a “one-size-fits-all” package, even for AKP elites.

There is no consensus in Turkey about how observant Muslim women should dress. Indeed, there is quite a bitter battle taking place within Turkish Islamic circles, rekindled by “Islamic haute couture magazine” Ala’s September cover. On it is an appealing young woman presented in a way that is unacceptable by Islamic standards. The magazine had pushed limits with five-inch stiletto heels, but the woman's seductive look crossed the line. Almost all conservative newspapers have condemned the magazine, which focuses on conservative Muslim women’s lifestyle and fashion choices, leaving us wondering how it has sustained an audience in Turkey since 2011.

Asking not be named, an observant scholar who now works for the government told Al-Monitor, “As a Muslim woman, I detest the Ala magazine and the like. I would prefer that my child read Cosmopolitan and Vogue, as at least they do not claim to represent any religion, just fashion.” When asked how she would compare Emine Erdogan with Sare Davutoglu, she said, “Mrs. Davutoglu is a scientist, a respected person of medicine, not just a wife. She is a different first lady. I do not think she would opt for Botox, extreme makeup and shiny colored headscarves ever. She is a true role model for our daughters.”

The debate about women’s role in Islamic circles is intense. When asked about why the conservative media does not question Sare Davutoglu about shaking hands with men, the use of fatwas in medicine and abortion, a government media liaison told Al-Monitor, “It is not a secret, as Sare Davutoglu is member of the Life Foundation, which is pro-life.” Yet, the foundation has several other outreach programs — for homeless children, mothers, educational programs and other activities. Now the question arises: Why it is newsworthy that an observant Muslim medical doctor is also pro-life?” He also informed Al-Monitor there was no point in asking "petty" questions about shaking hands with men.

The anti-vaccine allegation stems from a conference that Sare Davutoglu attended, where there was a discussion about the ingredients of childhood vaccinations. The debate about vegan, preservative-free and halal vaccinations has been quite intense in the last decade all around the world.

As the smear campaign against Sare Davutoglu on “petty” issues continues, we see similarities between the tactics of both pro-AKP and opposition groups. It is fair to conclude that both sides seize upon “petty” issues and sometimes deliberately attribute lies to their victims, which easily escalates into slander. Both sides are savvy in choosing matters that hit a nerve with their supporters.

There are also significant differences. When the pro-AKP media conducts a smear campaign, almost all mainstream outlets and an army of Twitter users join in. There are a great deal of resources available, and the process has become streamlined. The opposition lacks these resources for both traditional and social media outreach. Their efforts are more haphazard, spontaneous and vulnerable. That is, if anonymous attackers are caught, the chances of prosecution is much higher, a major deterrent for many opposition members from joining in smear campaigns.

Currently, the opposition in Turkey lacks the political power to question and alter the AKP’s arbitrary rules and regulations, a good example being the latest changes on abortion laws. Such restrictive decisions hurt poor women, who lack access to low cost abortions at government hospitals. These political decisions have real life consequences.

It is not Sare Davutoglu’s personal beliefs that we must question and battle, but the swift changing of the rules and regulations with little to no public debate. In the meantime, it is saddening to see that not many liberals — many of whom have been victims themselves of the AKP’s social lynching — would dare to defend Sare Davutoglu or view what's going on as a smear campaign. To demand and defend freedom of expression for all, should we not start with our opponents’ right to free speech?