From 2003 till 2010, there has been a 1,400% increase in the number of slain women. Three factors, including that the value of women in Turkish society has always been low, are at work. 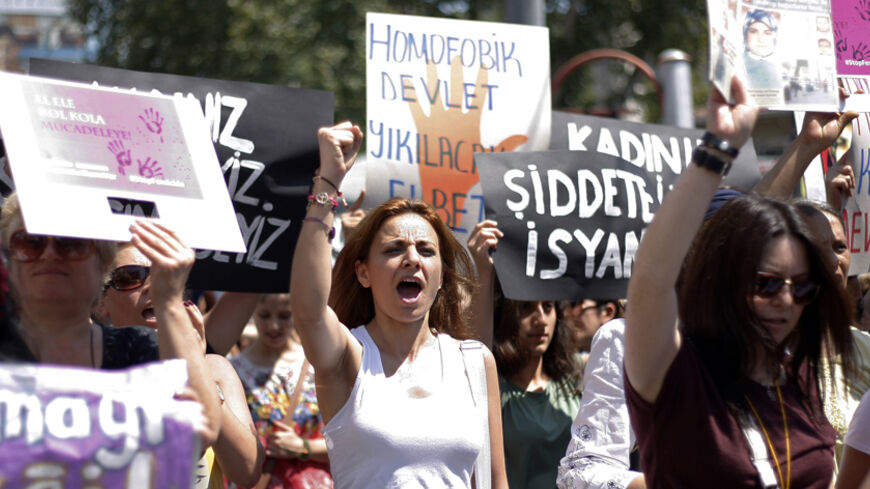 Women wave posters as they march in protest against domestic abuse, in Istanbul, July 20, 2014. - REUTERS/Can Erok

In a TV studio in Istanbul, an awkward yet telling moment unfolded for the cameras. During a show similar to America's "The Bachelor," a new bachelor was introduced: Sefer Calinak.

Before 2000, Calinak was convicted of murdering his two previous wives. He served 4½ years for his first murder and six years for the second. Calinak was in search of a new spouse.

During his introduction, show hostess Seda Sayan asked, “Have you ever seen a murderer with such a smiling face?”

The audience in the studio laughed and cheered, but then an uproar followed on social media. Was this show just another example of the glorification of violence against women?

Beyond this reality show, however, lies the sad and scary reality of Turkey: domestic violence, or to put it more bluntly, skyrocketing numbers of murdered women.

Domestic violence is considered a personal, not a public, matter. So witnesses comfortably turn the other way if they see a man beating a woman in the middle of the street, because this is a private matter. On May 3, a 26-year-old woman was beaten to death in broad daylight in Mugla province.

Scream if you are attacked was the only viable advice AKP government provided for victims. The victim screamed — as Family Minister Aysenur Islam had previously advised children to do if they were attacked — but the AKP minister’s magical formula failed the victim. The perpetrator was her fiance. There were multiple witnesses. None of them thought it was appropriate to intervene. On Sept. 9, a pregnant woman was brutally beaten on a busy Istanbul street and no one intervened.

One of the female witnesses, Nazen, 64, told Al-Monitor, “We do not want to be involved in a private family matter. It is between a man and a woman. A woman is like a fig tree. If a branch is infested with worms, you must cut the tree or your entire orchard will be lost.” Nazen’s view of women’s purity is widely accepted in Turkey.

Sadly, these are not isolated incidents. In 2010, the Ministry of Justice revealed the numbers on murdered women: From 2003 until 2010, there has been a 1,400% increase in the number of murdered women. The AKP government came under harsh criticism after the release of this information, so in a last-ditch effort to save its reputation, it started altering the numbers.

Hulya Gulbahar, a lawyer and a women's rights activist and one of the founders and former head of the Association for Supporting Women Candidates in Politics (KADER), wrote a searing column for the T24 news website explaining how, according to updated government statistics after the 1,400% headline, thousands of women were not reported as murdered. So, after 2010, do official numbers lie? A prominent lawyer and one of the founders of KADER, Vildan Yirmibesoglu, told Al-Monitor, “In 2012, the Family Ministry reported that 155 women were murdered, yet when we go through the news we add up at least 210 for the year.”

No one can argue violence against women has become a norm in contemporary Turkey. These women are murdered by their male relatives, about 50% of the time by their husbands; the rest could be a former boyfriend, brother, father-in-law, father, son or even grandson.

Why are women being targeted by their male relatives at such high rates, or why did the numbers increase so much in contemporary Turkey? We can dissect three basic causes of deeply rooted, complex, intertwined cultural, patriarchal and religious bases.

First, the value of women in Turkish society has always been low, and it has been depreciating in the last decade. Turkish laws have granted women equality in law, yet in reality women still belong in the “private” domain. When we look at the data from the World Economic Forum, in 2013, Turkey ranked 127th among 136 countries in the gender gap index of “economic participation.” Data shows that as economic independence and education of women increase, the probability of experiencing domestic violence decreases. Similarly, as men’s educational level increases, the probability that they will resort to violence decreases. Poor, young and uneducated women carry the highest risk of being victims of domestic violence.

Second: the concept of honor. What does it take for a crime to be justified as involving honor? Honor is a fragile and versatile concept for Turkish men; it could simply be the refusal of a woman to marry or her willingness to seek a divorce. Social pressure is an undeniable factor that contributes to honor killings. And the vicious cycle continues: As society belittles a woman for any sort of behavior, internal family dynamics force a male member to step up and clean the family name.

Finally, leniency toward family honor killings is the norm and is codified in the penal law. If there were motives involving honor, passion or family privacy, then the sentence can be easily reduced. If the murderer behaves properly, he can receive amnesty in a year or two. That is why the guest of the dating show, at the age of 62, had gotten out of jail for two consecutive wife murders. A few years of incarceration is seen as enough punishment in most cases. This leniency feeds from the fact that a woman’s life is worthless in Turkey and encourages other murderers. Indeed, there have been police reports that perpetrators have Googled possible punishments they might receive before killing their woman. Legal measures alone will not eradicate the problem, yet it could deter a significant number of perpetrators.

Many women also die while under official government protection. Reports from Mor Cati (the most prominent Women’s Shelter Foundation in Turkey) show the government’s support for women’s shelters is minimal. KADER founder Yirmibesoglu, as a seasoned lawyer from the field, told Al-Monitor, “The AKP government believes in reconciliation and encourages women to return back to their homes, rather than opening new shelters and protecting them from the dangers.” Yirmibesoglu added, “Honor should no longer be a reason to get a reduced sentence in the laws.” Many perpetrators believe their hate crimes are sanctioned by Islam.

Is increasing religiosity to blame for the rise in murder cases? Saban Ali Duzgun, a professor of theology from Ankara University, told Al-Monitor, “I would say concerning the murders of women that it is religious knowledge about the male-female relationship rather than religion itself that has an indirect effect. I say an indirect effect because I argue that these murders could have been prevented through a conscious and common interpretation. Along with strict penalties for murder, we could develop an education system that disapproves such heinous crimes with appropriate moral and religious teachings.”

Some of the ulema (scholars of Islam) have spoken against killing women; yet, just highlighting the appropriate surah (chapters of the Quran) and hadith (teachings of Prophet Muhammad) alone are not sufficient. A national effort is needed to change the concepts of masculinity in culture and tradition. When a woman — soon to become a murder victim — seeks help, fearing for her life, if the government official can joke, “Do not worry, the worst is you will die,” and after the murder no legal charges can be brought against this official, what kind of precedent does this set? Women are explicitly told to obey and get along with their potential murderers because there are no viable options available to them.

It seems that women’s lives are least valuable in the social market. Sexual abuse and domestic violence is seen as a personal or private issue. Even when they are murdered or raped, the courts question whether they could be partially guilty: Has the woman done something to deserve death? It is precisely this perception of viewing the female body through the honor prism that kills women.