#MeToo movement is stillborn in Turkey

The #MeToo movement has focused on violence in Turkey with significant support, but the attackers are neither named nor punished, and sexual misconduct is still a taboo subject, so its victims often suffer alone in shame. 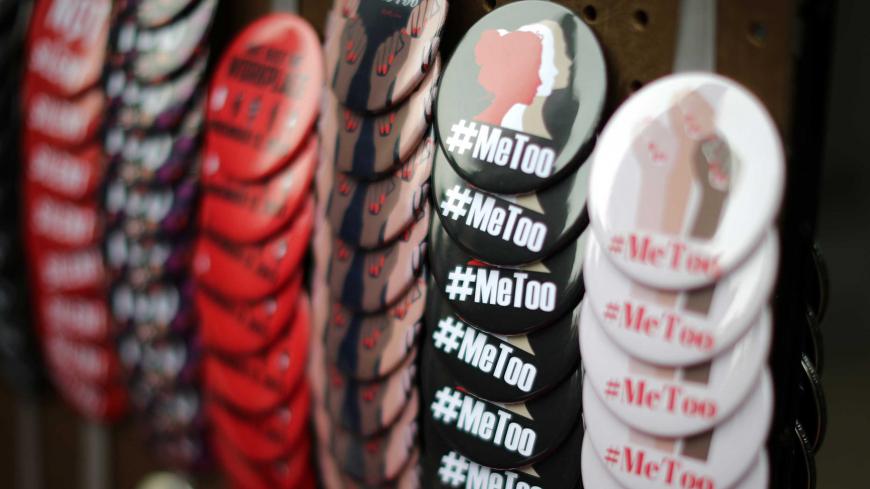 A vendor sells #MeToo badges at a protest march for survivors of sexual assault and their supporters in Hollywood, Los Angeles, California, Nov. 12, 2017. - REUTERS/Lucy Nicholson

In the 1990s, I attended a prestigious private high school in Ankara. My pediatrician was also our family friend, and her daughter attended the same school. I will call her Zehra for privacy reasons. I tried my best to avoid her at school, as she seemed strange or at least clumsy. So I thought.

Zehra often had bruises all over her body, and sometimes even broken bones. One day, when I had to stop by her family's apartment, I witnessed something I will never forget. The wood door to Zehra's bedroom was off its hinges and damaged in the center. Her mother was bandaging Zehra's rib cage, as blood dripped from her nose and mouth. Her mom told me, “Please don't tell anyone, her father got angry all of a sudden.”

Zehra’s parents were both well-educated. Yet her mother never sought help. The experience of physical abuse and the impulse to hide it can't really be explained to those who don't share them. And I never spoke about the incident.

The hashtag #MeToo took off on social media in October, enabling women to reveal and denounce sexual harassment. Since then, several prominent men in media and politics had to publicly acknowledge their guilt and resign from their powerful positions. The Weinstein effect spread around the world, arriving in the Middle East and, at least in Israel, leaving a significant mark. In Turkey, it took a different turn.

To commemorate Nov. 25, the International Day for the Elimination of Violence Against Women, the Hurriyet daily newspaper interviewed famous women who shared their memories of domestic violence. The interviews were published Nov. 27 under the headline #Ben De Siddet Gordum (#Me Too: I've Experienced Violence) and started trending on social media. Most of these prominent women confessed their memories of beatings and humiliation from men close to them: boyfriends, husbands, fathers or colleagues, as well as violence from random strangers. They advised others not to stay quiet, to join feminist organizations and set an example that humiliation should be brought to the perpetrators, not their victims.

Although Hurriyet daily’s interviews got public attention, none of those interviewed named their attackers. This is crucial because when no one is named, no one is shamed.

The Hurriyet project featured the attention-grabbing headline and beautiful and brave women speaking up, but it's not sufficient — particularly when women’s murders skyrocketed 1,400% from 2003 to 2010. More recent figures aren't encouraging.

Feminist lawyer Diren Cevahir Sen told Al-Monitor, “Violence against women and minors is on the rise [in Turkey]. It is rather difficult to keep track of male violence. The state tries to hide the facts." Women’s nongovernmental organizations also have complained about statistics being hidden.

"Learning from independent observers and the media, we know that in the first 10 months of 2017, 240 women have been murdered, 77 raped and 286 female minors have been sexually abused," Sen said. "When you have such data, is it possible to talk about any females in Turkey being immune from male violence? It's not possible. So the 'I was subjected to violence, too' campaign states the obvious. It is important for celebrities to join in such campaigns to generate public awareness. However, I think priority should be given to revealing the lack of government efforts to minimize violence against women, and highlight those where [government regulations] even encourage male violence.”

Sen makes a discerning point. At times, several members and supporters of the Justice and Development Party (AKP) have tried to reword information about events focusing on violence against women, to instead portray them as being about violence against men as well. They claim we should focus on overall violence and not differentiate. One of the most recent examples of this came from Corum province, where the head of the AKP municipal delegation, Halil Ibrahim Kaya, was quoted as saying, “What can we do if women are murdered? Police catch the murderers and they are punished. The rights given to women during this administration [AKP] have not been given by any other since the establishment of the republic. If men murder [women], they are punished. Are not men [also] being murdered?”

Kaya’s mind-boggling words aren't correct and, unfortunately, his is not a lone voice, either. Men who murder women frequently get reduced sentences, and AKP policies have indeed reduced already-weak government protections against women and minors who are victims of domestic violence.

To commemorate Nov. 25, the ruling AKP government prepared an ad with the banner “Violence Against Women Is a Betrayal of Humanity," which has been in use for the past couple of years with different videos. The message is to love, not to yell at, one’s wife or daughter and not to ignore victimization. Yet questions remain unanswered: Where can the victims go, and how will the government protect them?

There were a few critical voices in the media about the campaign. Mehves Evin, a columnist for Arti Gercek, said she applauds the initiative but it isn't enough. Evin invited the campaign's famous women to join others in street protests and marches. On Nov. 25, despite Turkey's repressive and continued "state of emergency," women gathered in several cities to stand in solidarity and raise awareness of violence against women. Evin emphasized that none of the mainstream media outlets could even report about these marches. In a country where women felt the obligation to name an organization “Platform to Stop Femicide,” more is needed than just media campaigns.

So the #MeToo movement in Turkey doesn't extend beyond the feature pages of newspapers. Famous women reciting their horror stories with undisclosed culprits and no consequences provide just another opportunity for everyday victims to think, “Even the famous actress gets beaten up by her husband, so it is normal.”

The movement is stillborn. It has not encouraged more victims to speak up, because it has not delivered any sort of justice. Without names, there are no consequences. No one resigned from their jobs; no one provided a public apology. Victims of domestic abuse are still quiet. And talk of sexual abuse remains taboo. These problems will not change until perpetrators accept their guilt and take responsibility for their actions. Women are still ashamed to acknowledge abuses because no one seems to care. Until the abusers are brought to justice, ordinary women will not come out shamelessly. Turkey apparently isn't ready for the #MeToo movement yet.