With Turkish police canceling the International Women's Day march in Taksim at the last minute and the president using the drama as an electoral distraction, it's time to ask if misogyny has become an official state policy in Turkey. 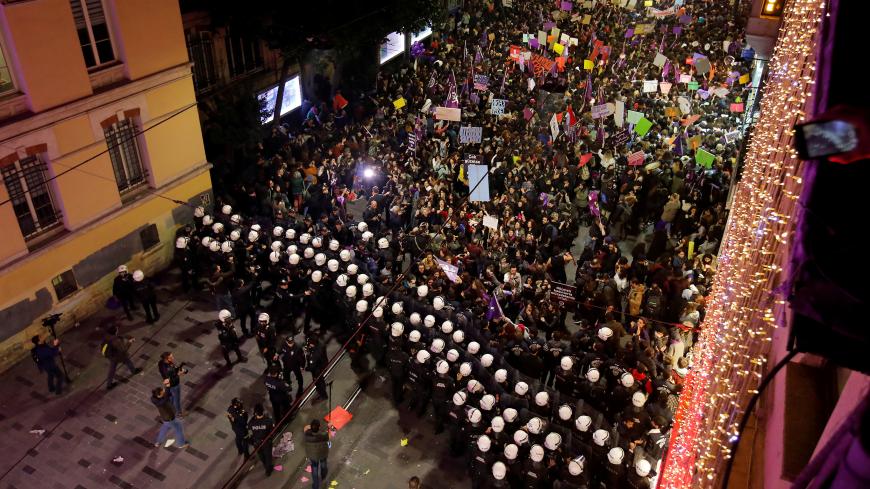 The first feminist night march in Turkey was held on International Women’s Day 2003 in Taksim. Irem Afsin, a journalist and civil rights activist, has attended all 17 of the annual marches. She told Al-Monitor, “Initially we were a small group. But over the years our numbers grew.”

Hatice, another activist and a banker, told Al-Monitor, “We like to claim the streets at night when the 'good women' are expected to stay at home. That's why we march after sunset.”

Both Hatice and Irem were at the feminist gathering the evening of March 8. Irem said she brought a whistle from home; Hatice got one from a friend. Whistles are a favorite noisemaker used at the marches.

“Women are being silenced at all places,” explained Hatice. "That's why we make noise; that's why we chant and won’t be quiet. When we are wronged, when we are abused, when we witness harassment, we are expected to be the good wife, mother figure, well-behaved girl. We are here tonight, one night in the year, for ourselves only. That is why our husbands, boyfriends or sons cannot join us. We want to be with other women in solidarity to share our emotions and to misbehave on purpose.”

As Turkey has become more autocratic in recent years, gradually all gatherings and protests have been banned. International Women’s Day marches were the only exception. Even during the two-year state of emergency after the July 2016 coup attempt, women gathered peacefully in Taksim. They sang, screamed, whistled, danced and held provocative placards. Some of the statements on these signs have drawn anger and laughter over the years. Hatice explained they are “our way of turning the tables."

"They are satirical statements of what we suffer all year living in a highly patriarchal society. So if it says, ‘At least three orgasms a week,' it doesn't mean women have a high sex drive, nor is it a way to mock our own lives: Many of us have suffered marital rape. Our husbands, partners don't take no for an answer. We don't expect men to understand us. This is a women’s gathering. We write in code for women. And yes, we are political," she said.

Indeed, there were some signs criticizing the government and videos in which women chant slogans against President Recep Tayyip Erdogan. This link shows a group of women dancing and singing, “Tayyip run, run — women are coming.”

This year, the March 8 women’s march in Taksim was banned at the last minute. Police announced the ban the day of the gathering and attacked women with tear gas, plastic bullets, batons and police dogs. The attack was reckless, as not only women but also the police dogs were victimized. Hatice said, “The police tried to beat us after the gas attack. They were directing the dogs to attack us as well, but the dogs had a hard time breathing and seeing.”

It's not easy to survive as a woman in Turkey. Between 2002 and 2009, women’s murders increased 1,400%. Between 2010 and 2017, a private group named Women’s Murders, which collects numbers from media outlets, reported that 1,964 women were murdered. Official numbers can no longer be trusted.

As the public was debating why the peaceful women’s march was banned, on March 9 a journalist from the pro-government Yeni Safak daily shared a video on his Twitter account. He wrote, “Last night at Taksim during the azan [call to prayer] these despicable people tried to protest in their own way.” A 96-second video attached to this tweet was shot from a tall building right across from the mosque at Taksim during azan, and the women’s gathering below can be seen and heard with their screams and whistles. Within a few days, the video was viewed more than a million times, and pro-government news promptly reported it.

In the video, the azan can be heard loud and clear, but all the women on the street said they had not heard it at all. In different videos recorded at street level at the exact time of the azan, the call was not at all audible. The marchers weren't protesting any religion, and indeed there were hundreds of Muslim women among them as well.

Zehra, a woman in her late 50s, is married with three sons. Zehra told Al-Monitor, “I have worked for [the Justice and Development Party (AKP)] women’s branch since 2004. The march is about women’s rights and here there is no party affiliation. We organize independently. Over the years, more and more women with headscarves joined the movement. We're not immune from patriarchy because of our piety."

She continued, "When I saw the college student [wearing a headscarf] who was sexually assaulted by the police while being arrested, and the AKP minister’s defense of the police, I understood once more this government has no respect for poor women. It doesn't matter if you are a Muslim or not. If you don't have political power, you are open to abuse by the government. I screamed all my anger on March 8. I do my daily prayers, and that evening was an exception — of course I knew the azan was to be called, but I didn’t hear it being called. We screamed against the police brutality and whistled in solidarity with our friends. I have seen several AKP men continue talking during azan; why are they now making up lies? Why did they ban the gathering? Why did they attack us? These are the questions to be discussed.”

Several videos of AKP officials carrying on with their tasks during azan emerged on social media.

Yet Erdogan has been referring, at every opportunity, to the rally and the azan. According to him, a group "under the guise of women's day … whistled at our azan." He said the women were led by two opposition parties, the pro-Kurdish Peoples’ Democratic Party (HDP) and the Republican People’s Party (CHP). He said, "They chanted slogans. Their only alliance is the enmity toward azan and the flag."

Erdogan said this was a matter of honor and pledged war against the enemies of azan, flag and the nation. Within hours of Erdogan's speech a group of men from the Ismailaga Religious Order converged in Taksim, calling takbeer (God is great) and chanting, "Break the hands that attack our azan." Carrying Turkish and Ottoman flags, these men attacked nearby taverns, then marched into the HDP headquarters in the district.

Huda Kaya, an HDP legislator who wears a headscarf herself, was in front of the building that night and said of the attack, “The truth will come out.” Kaya reminded the public that during the Gezi Park protests in 2013, the government lied about protesters attacking a headscarfed woman, and now the lie is about azan. Kaya also shared a video from her Instagram account in which police were spraying water on women in freezing temperatures because they were praying in public in the majority-Kurdish town in 2013. Is that showing respect for azan?

Several Islamist conservative and pro-AKP figures cautioned against provocative statements involving the azan or the flag, as they feared it could quickly turn violent.

With the election coming March 31, why would Erdogan want to alienate women, who make up half of the eligible voters?

“AKP elites are generating drama to agitate the hatred, anger and bigotry of young paramilitaries. This serves the purpose of keeping the unemployed youth engaged,” said a junior female employee of the Ministry of Family, Labor and Social Services.

Zehra and Hatice agreed with her. They confirmed that pious women’s involvement in feminist movements has generated resentment among the AKP base.

“Muslim women are disillusioned by the AKP," Zehra said. A headscarf doesn't protect us from police or male brutality. Now, in the recession, women are the first to be laid off from work. Most jobs the AKP government allowed women to work were in the black market anyway, and there is no job security. Women are responsible for feeding the family, and 20% [of the Turkish population] lives under the official poverty line. Erdogan knows well that women who have supported him in the last two decades here in Istanbul are exhausted. There is no more hope. If [men] acted according to genuine Islamic laws there would be no need for feminism, because women would not be oppressed.”

Claims about offenses of the sacred values are not likely to stop anytime soon. On March 11, Diyanet-Sen (the syndicate for employees of the Religious Affairs Directorate) issued a statement saying, “Intolerance toward the azan is not acceptable.” The headline of the statement read, “There can be neither independence nor a future without the azan.” They have demanded that the government open an official investigation and asked the women who attended the march to apologize to the Turkish and Muslim public.