Why is Erdogan wary of women?

Women find creative and cheerful methods to circumvent bans on International Women’s Day parades, promising to celebrate their day to the fullest in the streets. 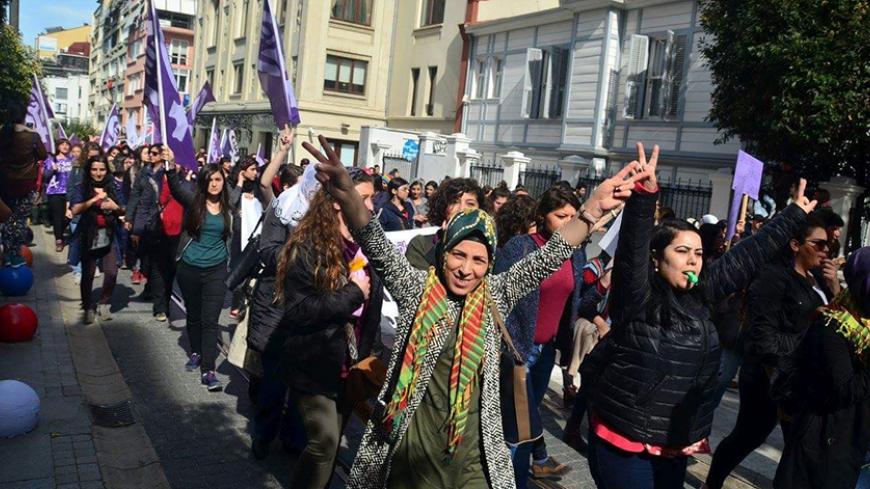 For decades, March 8, International Women’s Day, has been celebrated in Turkey as a nonpartisan, colorful, fun day of parades. Women from all walks of life gather in city centers to sing songs of solidarity and dance to Turkish folk music with feminist slogans. Celebrations are held not only on March 8, but on the weekend approaching Women’s Day.

This year on March 4, news broke that all parades for Women’s Day in the southeastern province of Sanliurfa were banned. Then other cities’ provinces, such as Ankara and Istanbul, announced similar bans. The official reason was for the security of women. However, women’s groups were not convinced.

Al-Monitor spoke with members of the Ankara Women’s Platform, which was one of the many civil society groups involved in the events of March 8. Women from the platform informed Al-Monitor that their representative, Yurdagul Boztas, had made an announcement explaining why they do not respect the ban. Boztas said that for years they have marched on that route in Ankara with no problems. Boztas also brought up some of the recent security failures in Turkey, such as suicide bombers, ongoing curfews in the southeastern cities, increasing numbers of rapes and cases of sexual harassment, and skyrocketing numbers of women’s murders, and asked, “With all these, how can you ask women to remain silent and not to take to the streets?”

So women took to the streets March 6, and also March 8. On March 6, several videos and photos appeared on social media showing their purple signs, songs and dances. In Ankara, there were announcements in Kurdish, Arabic as well as Turkish. They chanted, “Woman, life, freedom” and “The bans are yours, March 8 is ours.” Their songs called for female solidarity and the toppling of the Justice and Development Party. Their banners read, “Cinderella don’t go to the ball, come march with us,” “Prince charming on white horse need not knock on my door,” “Found Prince Charming and decided not to marry, got pregnant and decided not to have the baby,” and most of all, they asked for peace. In Ankara, police asked them not to assemble at their original meeting spot. Initially there were more police than women on the streets. Yet remaining calm and replying to the security forces’ calls with songs, the women resisted. One member of Ankara Women’s Platform told Al-Monitor, “Police had to cave in, as our numbers increased and we kept singing and chanting. They finally closed the road and asked us to parade down to another corner. As we did, more women joined us on the road. Initially, male friends offered to come with us, saying they would protect us from the police. We told them, if you guys come, we will not march.”

Interestingly, this issue is precisely what shook social media from the Women’s Day Parade in the Kadikoy district of Istanbul. A 20-second video went viral, which showed a middle-aged woman with a traditional white scarf being pushed by a man who yells at her to “Go home, sit at home, send your men out here.” One of the organizers of the march, Gulsum Agaoglu, a member of the pro-Kurdish Peoples’ Democratic Party’s Central Executive Council, told Al-Monitor, “This was a turning point in at least three aspects. First, the security forces told us we must go home. We did not. We split into groups, and then each group became a different section of the parade. We did not disappear, and the security forces did not know how to respond to us. They harassed us with slurs and sexually laden threats, but their tactics failed. Second, this parade received more attention when the security forces said “No slogans.” Now everyone on social media knows at least three words in Kurdish, “Jin Jiyan Azadi” (Woman, Life, Freedom), and the term became a trending hashtag. It symbolized that the west of Turkey is not ignorant to the suffering of Kurdistan. Women from all groups want peace. Third, this is a women’s march. Women are told to stay out of sight, out of mind, not to laugh in public. We demonstrated with our colorful outfits and hopeful chants that there is solidarity among women, that we are visible.”

So why was there a ban? Rana Birden Corbacioglu, co-founder of the newly established Women in Foreign Policy Initiative, told Al-Monitor, “I fear there is a separation of acceptable groups and others. When others gather together and present themselves exclusively as women who ask for peace, it poses a challenge for the state authority.”

Corbacioglu made a crucial point because International Women’s Day itself is cherished by Turkish President Recep Tayyip Erdogan. Indeed, a celebration of women took place at the presidential palace on March 8 with families of slain soldiers and terror victims.

On March 7, Erdogan was in the news as he broke into tears listening to the letter of a young mother, Hatice Gungor. She said she had two little kids, and she believed anyone could act as their mother, but that no one else can lead the country in Erdogan’s place, so in her prayers she was asking God to take away from her life to prolong Erdogan’s. After this emotional letter, Erdogan gave a speech where he expressed his dissatisfaction with certain billboards demeaning to women.

The billboard from Izmir read: “What is it to you? I will laugh whenever I want; I won’t make pies and I can wear a low cut; I cruise the streets in the middle of the night! Karsiyaka Municipality.” The billboard from Istanbul was posted in solidarity with LGBT groups.

As almost all groups are being gradually silenced in Turkey, women with their limited yet creative means have generated bold slogans, cheerful songs and beautiful dances to take over the streets. Right before Women’s Day arrived, women with headscarves who were protesting for media freedom were tear gassed and transgender women were singing alongside elderly middle-aged secular Turks, rural elderly Kurds and college-aged Syrian refugee women. All in one picture, all in Turkey.