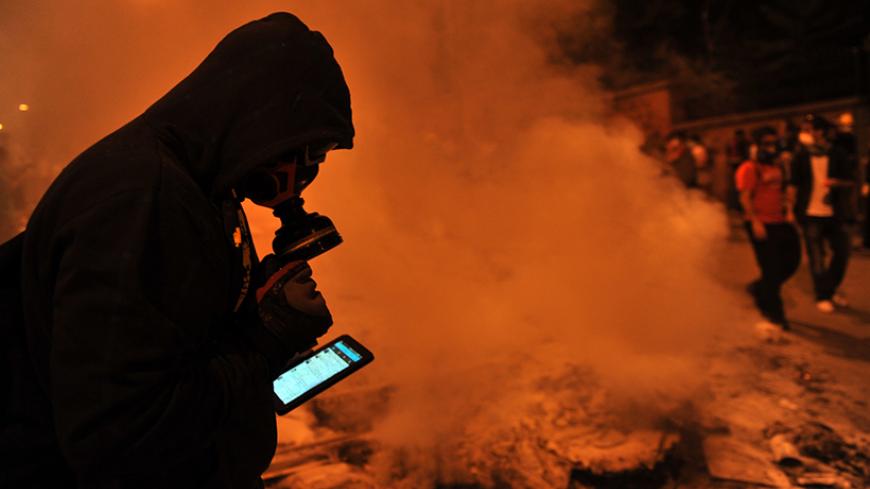 A protester uses social media on his mobile phone to give news about clashes near Taksim in Istanbul, June 3, 2013. - OZAN KOSE/AFP/Getty Images

The first campaign was a proactive, centrally organized, calculated action planned for July 24. The Freedom for Journalists Platform, comprised of 94 national and local media associations, planned and led the #direngazetecilik (resist, journalism) campaign to raise awareness about press freedom in Turkey.

The campaign's hashtag quickly became a worldwide trending topic on Twitter in the morning and remained on the national trending list for over 10 hours, potentially reaching over 210 million people on the web, according to TalkWalker analytics.

Social media analyst Gonzo Insight "purified" those results by eliminating "trolls who hijacked the hashtag in the evening for unrelated purposes," and found that some 40,000 Twitter users had actively participated in the campaign.

Many of the most popular tweets of the campaign referred to the ongoing broadcast and publication bans imposed by Turkish courts despite the apparent public interest in certain news coverage. These subjects include the graft investigations into several government figures opened late last year and the ongoing hostage crisis that started when the Islamic State stormed the Turkish Consulate in Mosul on June 10, kidnapping all 49 staff members, including Turkey's Consul General Ozturk Yilmaz.

The unprecedented participation in the #direngazetecilik campaign demonstrates that public awareness regarding press freedom is higher in Turkey than generally assumed. Many Turks know about the integral role of a free press in a democratic society and raise their voices to support it when they hear a rallying cry.

The rallying cry for the second social media campaign came not from the civil society, but from a Turkish official.

A reactive, decentralized, spontaneous campaign went viral quickly on July 29, hours after Deputy Prime Minister Bulent Arinc claimed during an Eid al-Fitr meeting that women should not laugh out loud in public.

According to BBC Trending, over 300,000 women shared photos of themselves laughing, using the hashtag #direnkahkaha (resist, laugh) on the first day. From Mashable to Polish tabloids, international media widely covered the protest and participation swelled.

Like most social media actions, the latest campaigns in Turkey relied on celebrities. #direngazetecilik was supported by scores of famous journalists, while #direnkahkaha was boosted by the endorsements of various celebrities, from FEMEN activists to British actress Emma Watson.

All this commotion begs the question: Can digital activism really spur change, or is it nothing but feel-good clicking by wannabe social advocates who continue enjoying their vacations as they participate in these campaigns? Oxford Dictionaries defines "slacktivism” as “actions performed via the Internet in support of a political or social cause but regarded as requiring little time or involvement."

Remember the #BringBackOurGirls campaign to raise global awareness about some 300 schoolgirls who were kidnapped by militants in Nigeria in May? Despite its viral success on social media and high visibility in traditional media, the campaign didn't "bring back our girls."

So how could Turkish women break the vicious cycle of male peremptoriness by simply tweeting #direnkahkaha? Isn't this also slacktivism? Let's be fair and not compare apples to oranges.

Although it is true that hashtag activism has been found devoid of meaning in several recent cases, perhaps including #BringBackOurGirls, Turkish society offers unique opportunities that have the potential to spur meaningful change, and have actually done so.

In a country where a simple Facebook post criticizing the government could get a public servant exiled to a remote village, showing your face while laughing at an influential politician and sharing the photo online involves a real risk, particularly if you're a woman in a largely conservative society.

Thousands of Turkish women did just that, and it shouldn't be underestimated, because structural change usually follows collective risk-taking. And if the action happens right at the source of the problem, unlike #BringBackOurGirls, it can spur change.

When Malcolm Gladwell provocatively claimed in the New Yorker in 2010 that "The revolution will not be tweeted," he still admitted that activism was tied to relationships and shared experiences.

A tweet doesn't make a law, but it can reinforce or dissolve relationships while creating a shared experience on virtual space, bonding not only people that know each other in real life, but also others.

In the terminology of the great Arab historiographer Ibn Khaldun, a social media message can act as a tool of "asabiyyah," the group consciousness that sustains social cohesion, predating the modern conceptions of social capital arising in social networks.

From the Arab Spring, particularly in Egypt, to Ukraine, social media has been used successfully for the mobilization and organization of the anti-government movements. It succeeded making changes in these countries, but then the people largely failed to improve their democratic institutions.

Unlike many of these countries, Turkey is a democracy with a population that overwhelmingly believes in the ballot box as the only means of creating a new government. In such a transitional society, the main “asabiyyah” function of social media is reformist rather than revolutionary.

Without the burden of a potentially destructive goal like uprooting the system, transitional society activists are able to focus on improving institutions and checking authorities instead of replacing them altogether. For instance, public pressure on authorities, whether through massive social media campaigns or street protests, can be a key part of the system of checks and balances. This is why the latest social media campaigns that came on the eve of a possible Recep Tayyip Erdogan presidency fit in Turkish democracy's steady evolution alongside last year's social media-driven Gezi Park protests.

And they did cause change: Erdogan, who is keen to build a "second Bosporus" costing billions of dollars, stopped his plans for Gezi Park. #direngazetecilik is just a manifestation of the public will that already led the government to release scores of arrested journalists. And Arinc had to clarify his remarks after #direnkahkaha, at least.

Turkey's next-generation civil rights movements are a beacon of hope for all democracies. People should indeed take digital activism with a grain of salt, but never sniff at the emancipating potential of social media. Instead of repeating anachronistic wisdom like the fact that the US and Indian civil rights movements had effected change without social media, Turks, especially women, know that we should ask one question: What would Martin Luther King, Jr. or Gandhi tweet?