A businesses' commercial to celebrate International Women’s Day may be a troubling sign for the AKP and the upcoming constitutional referendum. 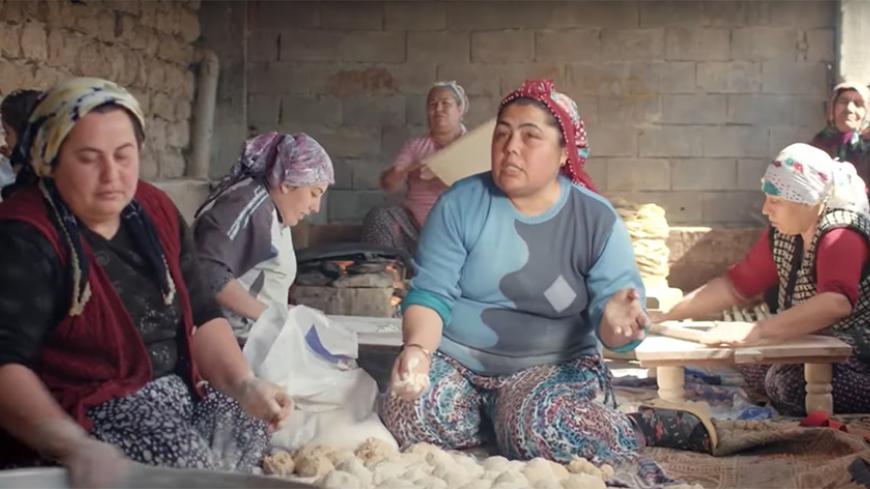 Filli Boya Paint, one of Turkey’s best-known brands of construction paints, produced a short video to celebrate International Women’s Day. Indeed, it has become a tradition in the last decade that male-dominated sectors, such as the construction industry and car manufacturing, honor women’s accomplishments in their field. This year's Filli Boya commercial was different, however.

For starters, most of the speakers in the clip were middle-aged or elderly residents from rural areas. On top of that, the video gave voice to women and men from different regions of the country, identifiable by their attire. The ad was also intriguingly anti-government, but without mentioning the ruling Justice and Development Party (AKP) or President Recep Tayyip Erdogan.

One part of the video references the notorious statement by AKP co-founder Bulent Arinc, who said women should not laugh out loud in public. The video ridiculed Arinc’s assertion, highlighting that this is not what people in Anatolia believe. A man in the video says, “It would not be ok if women did not laugh. Then flowers should not bloom.”

The video also denounced physical and sexual violence against women and criticized efforts to legalize underage marriage. The AKP has long argued that the latter is an Anatolian tradition, and secular snobbish elites simply did not understand the customs and traditions of Turkey's small towns and villages. The clip stood as a stark reminder that this is not the case. At the end of the video, mention is made of the founder of modern Turkey, Kemal Ataturk, averring that people do not want to lose the rights they gained by the establishment of a republic.

The video became an instant hit, and #FilliBoyaReklami (Filli Boya commercial) began trending on social media. Most viewers were impressed and applauded the company, but of course others were not so enthusiastic. Yasemin Varlik penned a column for ABC Newspaper asserting that the video represented an attempt to generate local and national resistance to the AKP’s insistence on Wahhabi morals by using Anatolian voices. Finding this a matter of concern, one columnist asked, “Why has such an honest and straightforward message been transmitted to the public by a paint company rather than all these political parties or nongovernmental organizations?”

Turkish media soon discovered and cheered the name behind the brand — Gozde Akpinar, a mother in her mid-30s and owner of Filli Boya. Akpinar’s twitter account has a pinned tweet declaring her unapologetic stand against the approaching April 16 referendum that reads, “For trees #no, for animals #no, for women’s respectability #no, for freedom of having access to press #no, for science and scholarship #no, for children #no.”

AKP supporters unhappy about the commercial expressed their feelings in various ways. For example, Zekeriya Say penned a searing column for the ultra-right Yeni Akit calling for a national boycott of Filli Boya products. He argued that although Akpinar’s stand against the referendum is an individual matter, given that Germany initiated a “no” campaign abroad, it is significant that Betek Boya, Filli Boya’s parent company that allegedly has German shareholders, has become part of the opposition. This criticism was promptly taken up by pro-AKP social media accounts to lambast Filli Boya for showing its “true colors,” accusing the company of being a representative of the German government and championing that its “betrayal” not be forgotten.

As might be expected, criticism evolved into ad hominem attacks and ended with unfounded allegations leading to a social lynching of Akpinar. Images of fake tweets from her made the rounds on social media. False statements belittling the poor, hungry, working class and allegedly AKP voters appeared under her handle. Akpinar firmly denied the tweets, and no searches revealed evidence to contradict her.

Damage was nonetheless done, as hundreds denigrated Akpinar, and she tweeted that she will be taking her case to court. The conservative satirical magazine Misvak shared a distasteful cartoon repeating and spreading the allegations in fake tweets. Filli Boya employees and thousands of tweeter users stood by Akpinar, applauding her for being a fair and brave employer.

The video is not political per se or about the referendum, so why did it attract the ire of pro-AKP figures? It hit two crucial nerves that had already led to tensions in the run-up to the referendum being released through angry outbursts against the Dutch.

First, the video celebrates Anatolian traditional values about women's place and belittles the AKP's fake and foreign Islamism. These have been particularly touchy issues for the AKP’s referendum rallying, which relies heavily on the support of ultra-nationalists. Also, the AKP has been struggling in its appeals to pious Kurdish voters. Both Turkish ultra-nationalists and Kurds are deeply worried about Erdogan’s attempt to Arabize Anatolia.

Second, but more crucial for the AKP, is that big business is quietly distancing itself from the party. Indeed, the AKP had begun a witch hunt even before the July 15 coup attempt, foremost against pro-Gulen enterprises. The Turkish Confederation of Businessmen and Industrialists, a pro-Gulen association, faced heavy government penalties and was promptly shut down after the attempted coup.

Boydak Holding, a member of the Turkish Industry and Business Association (TUSIAD), the oldest and most prestigious big business network, quit the association in April 2016 following the arrest of senior members beginning in September 2015 for Gulenist movement connections. An economic historian who requested anonymity told Al-Monitor, “As in Ottoman times, the idea with pro-Gulen businesses being seized by the government is considered normal, as their wealth is not perceived as private property. So even among the top business owners, the idea is that government provided the opportunities for these entities to become so rich so fast, and now the government is taking them over as punishment. However, of course, international fiscal markets view these reckless government interventions as a significant threat.”

Until now, big businesses had been complacent about AKP's policies. They are indispensable to the AKP's survival, but now one of them, led by a determined woman, stands publicly against the party. Can she prevail?

Kadir Yildirim of Rice University’s Baker Institute for Public Policy, while acknowledging the high risk for any business opposing the government, told Al-Monitor, “Keep in mind that the only way the current Turkish government keeps its popularity high and maintains a competitive, authoritarian model is by upholding this ‘prospering Turkey’ image. Any criticism that would challenge this narrative by the government poses a great risk.”

Yet, Erdogan has not used this opportunity to openly target Filli Boya in the last 10 days. To the contrary, on March 14, his wife held a reception for high-profile businesswomen.

An economic historian requesting anonymity observed, “[This is a sign] of the economic disaster Turkey is facing. Erdogan cannot afford to disturb another big business right before the referendum, not when youth unemployment has reached over 25%. Erdogan’s biggest ally — small- and medium-size enterprises — are failing to create jobs, exports are decreasing, and the US dollar is an issue more frequently discussed than the weather in coffeehouses.”

Filli Boya’s International Women’s Day commercial has unintentionally rocked the boats of complacent big businesses in Turkey. It may not be the last shake-up.