The pro-AKP media fail to carry a credible message to combat corruption charges. 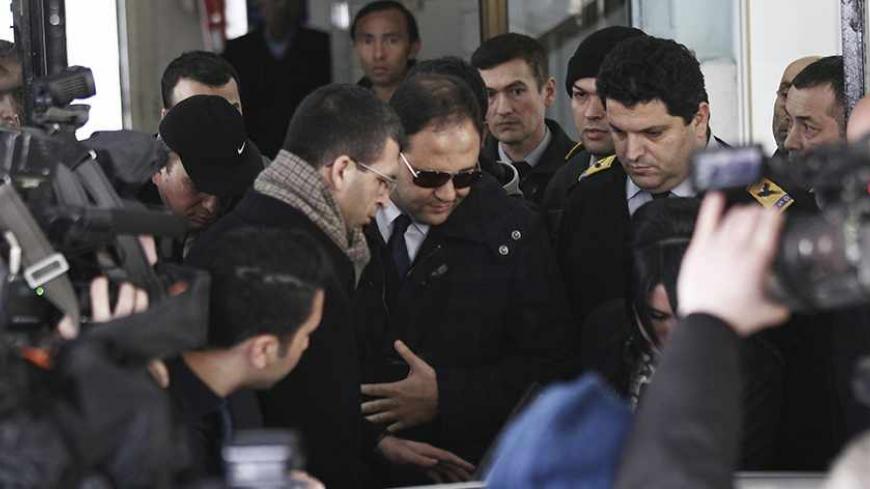 Early in December, rumors surfaced of a sex tape, which allegedly involved Turkish Prime Minister Recep Tayyip Erdogan’s brother. None of the "marginal" news channels agreed to publish or share the recordings. A brave journalist from Odatv, Baris Pehlivan, told Al-Monitor that even though they received information, they chose not to publish it because they believe it is utterly wrong to spread news about the "private" lives of individuals. I wanted to view this as a positive step and the end of revenge politics. I was wrong. Now there is the rumor about sex tapes of 40 parliament members from the Justice and Development Party (AKP) about to be released.

On Dec. 17, however, hell broke loose in Turkey. Al-Monitor’s Turkey Pulse has provided good coverage of the current crisis involving three different cases of corruption with several prominent businessmen, sons of ministers and other high-level bureaucrats.

For months, Al-Monitor has witnessed along with other international publications how Turkish media suffer from lack of freedom. Mainstream media in Turkey have slowly come under the AKP’s control with a tacit understanding of "our way or no way." So there is the majority pro-AKP media and a few "marginal" TV channels, online and print publications available for audiences. The marginal standing is not because of their political viewpoints but because they dare to criticize. Another section of the "mainstream" media can be deemed "pro-Gulen movement" (also known as Cemaat, "Community," or Hizmet, "Service Movement"). Pro-Gulen movement media outlets have become increasingly critical of AKP policies as the now-notorious conflict between the movement and government intensified.

In the early hours of Dec. 17, when these well-known names were being taken into custody, only "marginal" channels were airing the news. Pro-government media were shell-shocked. Just as in the protests at Gezi Park on May 30, their first reaction was to stick their heads in the sand and hope that it would go away. A distinguished journalist who writes for the Taraf daily and appears on Arti1 TV channel, Ceyda Karan, told Al-Monitor, "In a country which had no corruption news for a long while, and one that involves cabinet members’ sons, instead of seeking detailed information on charges for the public’s sake, they took the prime minister’s first line and turned it into a headline, 'We will not bow.'"

Crisis management is successful only with a prompt and credible reaction. Pro-AKP media failed utterly because first they lacked immediate response capability. Second, repeating their media strategy of Gezi Park will not help their cause in this crisis.

Pro-AKP media were too late to counter the rumors spreading on the first day. On social media they were almost mute. I say almost because some did indicate their support for Erdogan with the hashtag #Erdoganiyedirmeyiz (We will not let you "eat" Erdogan) and #GuvenimizTamLiderimizErdogan (Our confidence is fine, our leader is Erdogan) and struggled to mobilize support. However, the bigwigs were quiet initially. One exception goes to one of Erdogan’s advisers, Ismail Cesur, who took on a tweet from an outspoken journalist for the Turkish daily Sozcu, based in New York and Istanbul, Oray Egin.

Cesur’s reaction was summarized in Egin’s tweet as, "So we can understand you say that the charges have nothing to do with Erdogan?" Egin told Al-Monitor, "In the last five years we have heard pro-government journalists supporting illegal wiretapping, targeting their colleagues, making up lists of potential arrests and most importantly praising the police and judiciary. Today, the very same judicial elite and police chiefs are their initial targets. Government media would praise Zekeriya Oz, a prosecutor, when he launched probes into journalists or ex-military members. Today, the same corruption charges are orchestrated by him but he's being discredited by the same people. Journalists who once claimed that the content of illegal wiretappings is more important than their illegality are blurting out phrases like 'presumption of innocence.'"

Egin delivered the final punch when he told Al-Monitor: "Pro-government media have always been a disgrace and still are."

I tend to concur with Egin, because when you listen to one pro-AKP pundit, you listen to all of them. They almost speak and write following a script repeating the same words, coming to the same conclusions and giving the same examples as evidence. A quick glance at the headlines of pro-government newspapers from Dec. 19 draws a picture: Yeni Safak Daily: "We will finish this gang," with opinion pieces titled, "The second Gezi operation" and "Junta operation and the next three months"; Sabah Daily’s headlines read "Gangs will be cleaned up"; Star daily stated "Illegal organizations will be revealed"; HaberTurk reads "There is a Dirty Operation," and several others follow this path: operation, gangs, coup and junta are the most frequently used words.

However, this time, pro-Gulen movement media outlets and others have joined forces tacitly. Turks have a right to know about the financial dealings of a government that has simply refused to provide records to the parliament for the last two years. Indeed, this has been an open secret: In May 2010, then the head of the Housing Development Administration (TOKI) and currently the minister of urban planning and development, Erdogan Bayraktar told the press, "Look, I say this with all my heart. It may be not right for me to utter these words, but believe me, God sends us the money."

I wonder if his son has used the same line since he has been taken into custody.

Even though the Turkish government has failed to protect an image of advanced democracy during the Gezi Park protests in June, its media outlets have managed to convince the core base of AKP voters that these were just a bunch of street thugs, and the AKP is the only Islamist party they can trust. Erdogan’s biggest fear is to lose the "concerned Islamists" whose votes, combined with the Gulen movement’s votes, may pave the way for a coalition government. As one columnist from the pro-AKP daily Milat boldly put it, "The AKP has much more to lose in the battle with Gulen movement." Hence, two days into the crisis, the conservative daily Akit headlines became a social media joke: "Traces lead to Israel."

The AKP will lose significantly if the pro-AKP media keep up an image of "corruption is irrelevant." Unless the AKP sees the "rotten apples" within its ranks and delivers the "justice" it has promised, it will be rather difficult to hold onto the "coup" attempt arguments. This could provide an opportunity for the AKP to clean house, minimize nepotism and view critics of the AKP not as enemies but as true patriots.

Shouldn't the AKP come clean with the Turkish public first, and then fight its battle with the Gulen movement or other "foreign" provocateurs?

Unless the mainstream media start reframing the issue, the AKP will sustain significant losses.