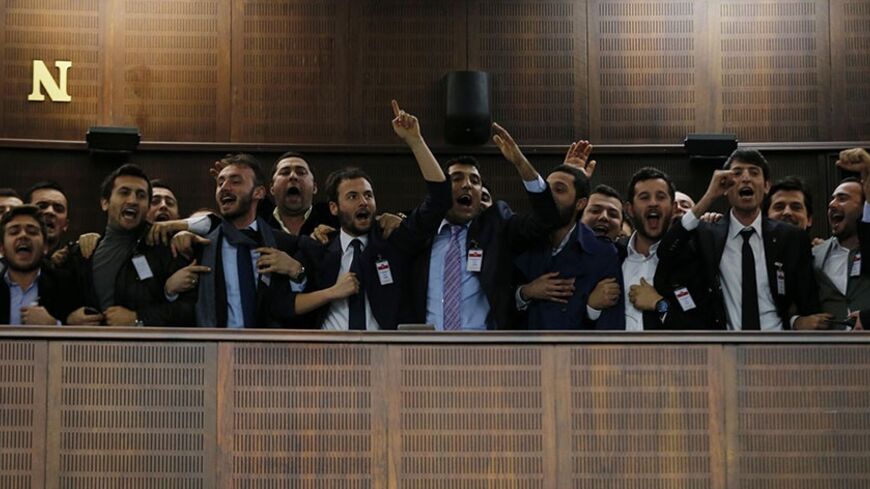 Supporters of Turkey's Prime Minister Recep Tayyip Erdogan react as he addresses the matter of voice recordings of him purportedly telling his son to dispose of large sums of money, Ankara, Feb. 25, 2014. - REUTERS/Umit Bektas

I have been watching Turkish Prime Minister Recep Tayyip Erdogan for more than a decade now. I have always found him to be a charismatic public speaker. He would not put you to sleep; he has a good sense of humor. His personal charms have helped him survive the troubled waters of Turkish politics. Sadly, things have changed. In a gradual yet steady manner as Erdogan has become rather enraged. Since Dec. 17, I have crouched in my chair with fear watching Erdogan. Those of you who are not able to understand what I am trying to say can watch this video and view his chilling reactions answering a few simple questions during a news conference. In this instance, a journalist properly asked Erdogan about the three allegations, “whether he knows of and owns villas built on land that belongs to the treasury, whether he had telephoned a television channel boss to delete a bottom-of-the-screen news crawl about an opposition leader’s comments on live TV and whether Erdogan had ordered businessmen to create a 'pool' of money to purchase a newspaper and television conglomerate.”

There are several allegations against Erdogan’s party. Tthe Justice and Development Party (AKP) refers to these as “operations” or attempts of a “coup” by different lobbies. From “losers' lobby” to “Jewish” or “pineapple” and the latest, “robot” lobby, Erdogan has uttered at least 20 different lobby names since June 2013. This is when there are no registered interest groups in the Turkish political system.

Nevertheless, on Feb. 25 there were protests asking the government to resign, which were met with tear gas and water cannon again, in several cities against the latest alleged “corruption” leaks (the notorious phone conversation between Erdogan and his son Bilal) following another revelation that pro-Gulen movement prosecutors have wiretapped thousands of bureaucrats, journalists and academics and that the AKP government had just learned about this.

Going back to the Feb. 24 alleged corruption leak, the recording released on YouTube involves five phone conversations between Erdogan and his son Bilal. The conversations were allegedly recorded Dec. 17-18. It starts with Erdogan explaining to his son the start of the graft probe with four ministers’ sons being arrested, their houses searched and money seized by police. Then Erdogan asks his son, “What about your house?” The rest of the dialogue was based on how to get the cash out of the house without attracting attention and which family members should be contacted about the matter. On Feb. 25, Erdogan told the public that this treacherous attack was not on him the individual but rather against “the Turkish prime minister” and that it would not stand. He also said, “We will answer all allegations when the time comes” — but not until the next elections.

Is it so difficult to prove the recordings are not authentic for the government? The rumor mill predicts there is more to come. Nevertheless, put in context with all others, these recordings present an embarrassing picture of how corrupt Turkish politics has become. There are serious accountability problems that the AKP has not been able to clear up. I do not think anyone is happy about wiretapping, however, given that Erdogan referred to recordings of opposition party members that forced them out of their party posts a couple of years ago as not private but public matters; one wonders whether he applies the same standards to these cases affecting him? In addition, Erdogan and AKP members have continuously scolded any critic or anyone who dares to ask a question by saying, “Go get proof, then talk. If you cannot prove your case, do not talk.”

Also, these recordings reveal rather discerning facts. For example, in December I wrote a piece for Al-Monitor explaining how the AKP has not provided accounts of its spending. The Republican People's Party (CHP), the main opposition party, had prepared posters, but the ad agency denied them spaces to be displayed. These posters stated, “If the citizens are paying their taxes, the government should provide an account of its spending.” There were allegations that AKP men intervened and stopped the posters from being put up on the billboards. The leaks provided evidence that a series of conversations took place between Ankara’s mayor and one of Erdogan’s advisers, in which they agreed that those posters should not be displayed.

One after another, leaked phone conversations sadly confirm the longtime rumors about Erdogan and his administration. Advisers, top level bureaucrats, the prime minister’s family members and Erdogan himself have been making phone calls about journalists, commentators and academics, controlling the release of information on opposition parties. Reaction from the opposition has been rather harsh. CHP Deputy Vice Chairman Umut Oran tweeted, “This is the regime Erdogan dreams to have where one can distribute government projects to whomever he pleases, and no one could ask him questions. “This kind of rule is a dictatorship.” CHP’s chairman, Kemal Kilicdaroglu, commented, “A prime minister should rule the state, not become the state,” and called upon Erdogan either to resign or hop on his helicopter and escape.

Erdogan’s accountability has been challenged on multiple levels. One of the most notorious cases was about a young conservative woman with her baby, being sexually and physically attacked on the first day of the Gezi Park protests by “tens of topless men with leather gloves” at Istanbul’s Kabatas ferry landing. Several AKP pundits told the Turkish public, “We watched the video footage of the attack.” The security camera recordings have been released after months of investigation and no commotion of that sort can be seen. There were no eyewitnesses who had come forward, either. Erdogan took this release of the lack of “evidence” as a personal attack and told the public, using words that might be considered slang, “Where are you gonna put the doctor’s report?” for the woman who allegedly had been attacked. Sinan Ogan, a parliamentarian from the MHP (Nationalist Action Party) told Al-Monitor, “I am not pleased to hear our prime minister utter such words in such a manner to the Turkish public. I find it offensive. I am also embarrassed that the prime minister and his son make the news with allegations of major-scale corruption. Turkey needs a restoration of its institutions.”

Although it has only been a day since Erdogan and his son’s alleged phone conversation has been posted on YouTube, it has had more than 3.5 million viewers and Turks have found a way to generate humor and mockery out of this embarrassing situation. A new webpage titled “Clean the Cash Stack,” enables you to play a game where you have only a minute to distribute $1 billion among eight of Erdogan's relatives. People have commented on social media how sorry they feel for the son, Bilal, because it was so hard for him to get rid of the cash. Another Web page asks, “Did Sumeyye arrive?” Sumeyye is one of Erdogan’s daughters.

Dec. 17, the day news broke of the graft probe, Salih Tekin Yigit, 50, immolated himself in front of Turkish parliament for reasons yet unknown. On the same day, millions of dollars were seized from the residences of cabinet members’ sons. Since then, the Turkish public has lost track of how many “tapes” were released. Not many of us could remember which one was legally recorded, or which one was illegally released. But at this point, we all should have the right to ask a few simple questions without facing revenge attacks and temper tantrums. Has there been abuse or misuse of power by the Erdogan administration? Is there evasive corruption or nepotism in the Turkish bureaucracy? Is there a gang within the state? How did this gang survive 11 years of AKP administration? Did some members of Erdogan’s administration obstruct justice?

If this is a perception war, the AKP has won a couple of battles, but is it winning the war?