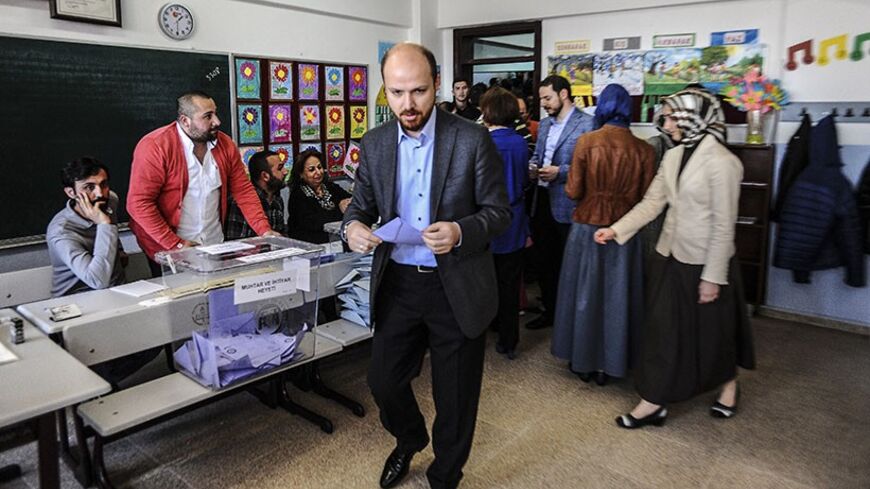 Turkish Prime Minister Recep Tayyip Erdogan reacted quickly to the Feb. 25 leak of a recording purportedly of him and his son discussing on Dec. 17 — the day the graft probe hit the surface — how to conceal the family’s wealth from corruption investigators. Main opposition Republican People’s Party (CHP) leader Kemal Kilicdaroglu, who framed his March 30 local election campaign around the graft probe, also was quick to react to the leaked recording. “A prime minister cannot be a thief,” Kilicdaroglu said. “Erdogan should either take a helicopter and flee abroad or resign.” Instead, the prime minister scored yet another triumph at the ballot box a month ago, and appeared at the balcony of his party's headquarters in Ankara to give a victory speech — for the first time with his son Bilal at his side.

Bilal Erdogan has now filed a libel suit against Kilicdaroglu. Although it was not clear at first who filed the defamation complaint, CHP Deputy Chairman Bulent Tezcan said in a written statement that the party’s secretariat received a court summons on April 28 calling Kilicdaroglu to testify as a “suspect.” “We do not accept this summons for testimony as it fails to comply with the legal and judicial rules,” Tezcan said. He argued that state prosecutor Mehmet Demir, who called Kilicdaroglu to testify, is politically motivated, and that Demir received orders and directives to issue this summons in an effort to intimidate the opposition.

“According to Article 83 of our constitution, all elected members of the parliament can be invited to testify, but the prosecutors need to first send this request to the Ministry of Justice. The ministry forwards that request to the parliament with full explanation as to why this parliamentarian is being called to testify,” Tezcan said, noting that the prosecutor’s office did not provide any information at all on the summons. “This, running contrary to all these rules and norms, is a typical example as to how our judiciary has become politicized.”

Speaking to the Turkish media, state prosecutor Demir downplayed violating these legal procedures. “We invited him [Kilicdaroglu] to testify, and he declined. There is no need to create a scene,” he said. Demir argued that this was “his fault” as he did not pay attention to whom the complaint was filed against.

Akif Hamzacebi, CHP deputy parliamentary group chairman, however, was blunt today, April 30, about this line of defense. “When you take into account who files the complaint against whom, you can’t really pretend to take this as an innocent mistake by the prosecutor. This is a scandal,” he said.

Presuming that Bilal Erdogan would not act in this matter without the knowledge of his father, ruling Justice and Development Party (AKP) members were also uncharacteristically critical of this action. Parliament Speaker Cemil Cicek said on April 30, “All should know that this request will never be accepted. This is an absolutely disrespectful act.” Cicek added, “The related state institutions should be more careful when they indulge in taking an action against an elected member of the parliament because these acts create political problems.”

AKP Deputy Chairman Huseyin Celik was also critical. “This is an outright violation of the constitution,” Celik tweeted on April 30. “Although Istanbul prosecutor’s office has withdrawn its request [inviting Kilicdaroglu as a suspect to testify], theirs is certainly a big gaffe and negligence.”

Ozcan Yeniceri, a deputy from the opposition Nationalist Action Party (MHP), also stepped up criticism of this prosecutor’s act. “While no prosecutor has been able to invite the prime minister [to testify] in this graft probe investigation, there are these pro-government prosecutors taking aim against the opposition. One has to really think hard about these wrongdoings in the country,” he said.

While even the ruling party members cannot defend Bilal Erdogan’s maneuver, CHP Deputy Chairman Gursel Tekin said, “This is exactly what it means when one loses all sense of shame. They are inviting us to testify because we raise awareness about these thieves. And they in return are showing us the stick of the judiciary. They are trying to intimidate us and we leave it to the conscience of our people.”

Rallying behind their leader today, CHP members stressed that the party will file a complaint with the Supreme Board of Judges and Prosecutors (HSYK) arguing that this state prosecutor has violated the constitution.

Demir had recently made public comments defining the graft probe as an attempted coup. “The December 17 and 25 judicial investigations … have created a perception in the public of an attempted coup, just as the prime minister defines it. After all these perceptions and suspicions, the HSYK’s integrity suffered irreparable damage. Therefore, it is the government’s obligation to make changes in the HSYK law.” Indeed, Erdogan’s government made those changes after the graft probe hit the surface, and the president approved it in February. Yet, the Constitutional Court decided on April 11 that the new articles in this law bolstering the control of the minister of justice over the HSYK are unconstitutional because they attempt to overrule the independence of the judiciary with respect to the executive.

Last but not least, while Kilicdaroglu has not yet directly addressed the issue, he vowed as early as April 29 that he won’t stop chasing after the corruption and bribery scandal that brought the prime minister, his son and his former ministers under judicial scrutiny.