The Turkish prime minister is using his executive powers in what seems a desperate effort to alter the legal system to protect himself and his government against further corruption allegations. 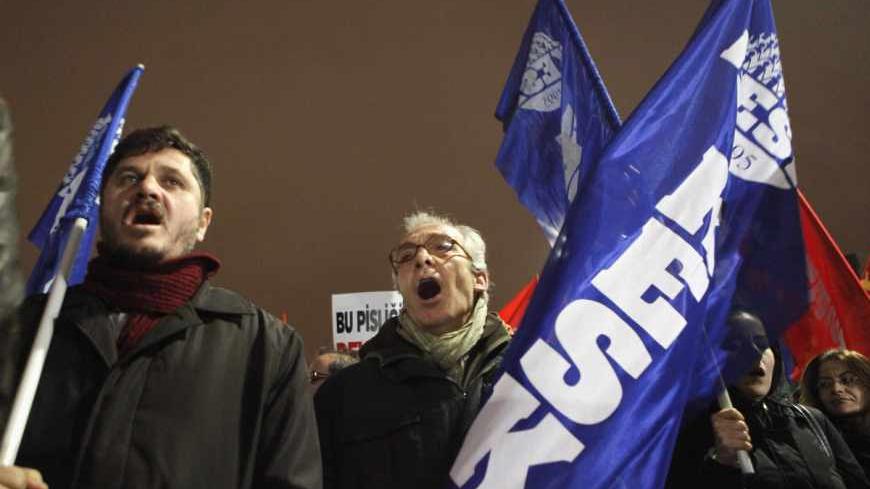 Prime Minister Recep Tayyip Erdogan is fighting hard to dispel the black clouds that have gathered over his government after a prosecutor initiated a massive corruption probe on Dec. 17, which also implicated members of his government.

Erdogan, who claims he is faced with an international conspiracy aimed at toppling his government, is using his executive powers now in what seems a desperate effort to alter the legal system as well as regulations governing policing practices, to protect himself and his government against further corruption allegations.

Many questions, however, if these and other similar steps will be enough to raise the pall that has settled over his political career. The corruption scandal is doubly disastrous for Erdogan and his Justice and Development Party (AKP), coming as it does when crucial local elections are only three months away.

Erdogan’s handling of this crisis will also have a bearing on the presidential elections next summer, which he hopes to contest and win. But his angry railings against perceived domestic and foreign enemies — most of whom are said by his critics to be imaginary — and the steps his government is taking to ostensibly combat this “conspiracy,” are merely augmenting his image as an authoritarian politician with dictatorial tendencies.

The disaster for Erdogan in all this is that he has made fighting corruption a central theme of his political career. This is also why he does not like his party referred to by its Turkish acronym of “AKP.” He prefers instead the abbreviated “AK Partisi” (AK Party) because the adjective “AK” in Turkish can means both “white” and “clean.”

Turkey is a country, however, where such claims can be exposed for what they are in unexpected and brutal ways. It is also a country of biting political humor. Based on its acronym the AKP is now being popularly referred to as the “Ayakkabi Kutusu Partisi,” which means the “Shoe Box Party.”

The reference is to the millions of dollars found, under the current probe, stashed away in shoe boxes in the house of the head of the government-owned “Halkbank,” who has since been put in prison.

An example of how touchy the government is on this score was provided over the weekend, during a public speech by Erdogan in Akhisar, a town in Manisa province. Nurhan Gul, a retired woman trying to live on a subsistence pension, protested Erdogan from her balcony as he was speaking by waving a shoe box at him.

She was immediately arrested by members of Erdogan’s security team and taken to a nearby police station, where she was questioned for four hours before being released. Much to Erdogan’s annoyance, Gul became an overnight hero, with Kemal Kilicdaroglu, the leader of the main opposition Republican People's Party (CHP), phoning to congratulate her.

With examples such as this it seems there is little Erdogan can do to reinforce the credence of his often made claim to be introducing advanced democracy to Turkey. A highly controversial decree his government announced within days of the corruption scandal also contradicts this claim.

This decree was designed to force detectives into informing their superiors about their investigations. Legal experts say this is contrary to the separation of powers and could harm investigations involving the government, or sources close to it, since the line of superiority goes all the way up to the prime minister.

The decree has since been annulled by the Council of State for being unconstitutional on these grounds. Detectives will, as before, only have to only inform prosecutors about their investigations. Erdogan and members of his government, who are still trying to alter this, are reportedly prepared to go so far as introducing a bill on the topic in parliament, where the AKP continues to have an overwhelming majority.

Other public pronouncements by Erdogan have also contributed to sullying his democratic credentials, despite claims by government quarters that they are acting to protect Turkey’s democracy against outside plotters.

Erdogan is now targeting the Supreme Board of Judges and Prosecutors (HSYK) for allegedly “exceeding its authority,” after it announced last week that changes to police regulations, which would force detectives to inform their superiors about their investigations, were unconstitutional.

The HSYK issued its statement just before the annulment of the government decree by the Council of State, leading Erdogan to claim a grand conspiracy by followers of the influential Turkish cleric Fetullah Gulen, who resides in Pennsylvania and is believed to have a large following in Turkey, including in the police and the judiciary.

A feud has been going on between the AKP and the Gulen movement, details of which can be found in Al-Monitor’s Turkish Pulse. Erdogan and members of his government claim it is this movement which activated the current probe in collusion with foreign powers.

Arguing, during an address at Sakarya University on Dec. 27, that the HSYK “has committed a crime,” Erdogan said he would waste no time in trying members of the board to have them convicted if he had the authority to do so.

A few days after Erdogan’s remarks, Turkish Deputy Prime Minister and government spokesman Bulent Arinc said, on Dec. 30, that the Justice Ministry would take the necessary steps against the HSYK to rein it in, and also against prosecutors who, according to the government, behave illegally.

“I can’t say at the moment whether a legal or constitutional change will be necessary. But whatever will be done, it will take place in the parliament, the center of the national will,” Arinc told reporters in Ankara.

These remarks are being taken by legal experts as further signs that the government is using its parliamentary majority to tamper with the judicial system to protect itself against corruption charges. Signs are also mounting that indicate the government is preparing for a witch hunt against elements of the judiciary that are acting independently, as they in fact should according to legal experts.

Meanwhile, Erdogan has declared war on the prosecutor who initiated the whole corruption probe, and who has since been withdrawn from this investigation by the chief prosecutor, clearly under pressure from the government.

Erdogan was livid after Muammer Akkas, the prosecutor in question, issued a press statement saying the investigation had been taken from him, after his order for a new wave of arrests over corruption charges was prevented by the government. Leaks to the press indicate that the prosecutor also wanted Erdogan’s son Bilal to be questioned.

“Sir, we are not done with you yet.” Erdogan said threateningly in Manisa over the weekend, referring to Akkas. He went on to try and turn the tables on the prosecutor by alleging that Akkas was the one involved in corruption, because he had initiated this investigation to serve the interests of shady quarters for the sake of personal material gains.

Legal experts say the head of the executive, or any member of the government, has no right under Turkey’s Constitution, to interfere in the legal process in this way.

Erdogan, however, clearly believes the best form of defense in this case is offense.

It's an open question, however, how all this will effect public perceptions, especially among Erdogan’s natural supporters who are also said to be uneasy about corruption allegations concerning former members of the government.

Wolfango Piccoli, the managing director of the New York-based Teneo Intelligence, a political risk advisory firm, who has been following Turkey for years, predicts more turmoil at home as Erdogan and his AKP unfold their counterattack against parts of the judiciary.

“Our baseline is that Erdogan and the AKP will weather this crisis and survive politically, but they will struggle to replicate their past successes in future electoral contests,” Piccoli said in an assessment made available to Al-Monitor.

“Suffering from a siege mentality and interpreting any social, legal and political challenge [corruption probe, Gezi Park protests] as an existential threat, the AKP leadership will prioritize its survival over the rule of law, media freedom and individual liberties,” according to Piccoli.

The bottom line: Erdogan’s political survival will be detrimental to Turkey’s democracy, while the dramatic developments since Dec. 17 clearly point to the kind of detrimental effect this could have for Turkey’s once booming economy.