Erdogan has been surprisingly successful in framing the graft probe in his favor, while purging the bureaucracy on an unprecedented scale. 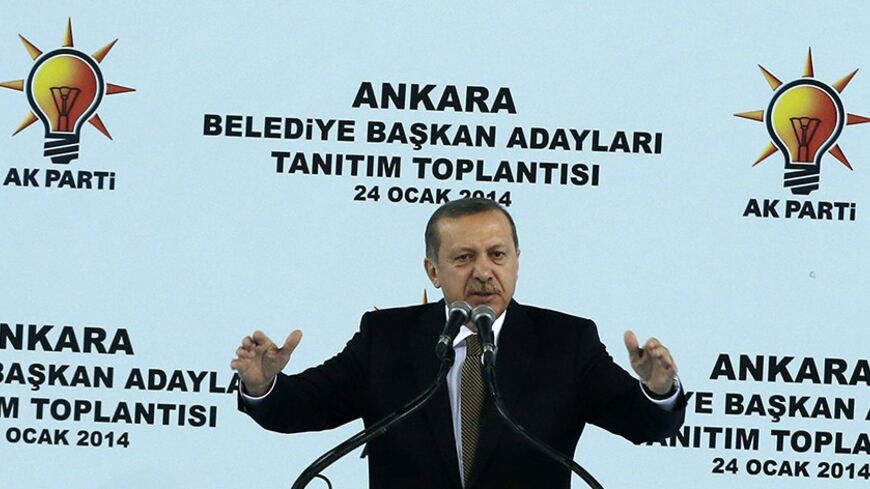 On Dec. 17, Turkey woke up to a major graft probe. Since then, Al-Monitor’s Turkey Pulse has been busy reporting on the mindboggling sequence of events. The probe, which many predicted to be the end of the Justice and Development Party (AKP), has become a war of perception. If you google "graft," "bribery" or "corruption" in Turkish, you will see the focus has already shifted to a concept so far unheard of in Turkish politics (the “parallel state”), reassigning public prosecutors and police officers to different posts, condemning all sorts of “disinformation” and changing laws governing the structure of the judiciary.

On Jan. 21, during a press conference in Brussels, Turkish Prime Minister Recep Tayyip Erdogan said, “We dealt with the mafia and we finished them, we dealt with gangs and we finished them, now we are in the process of eliminating the elements of the parallel state.” As Tulin Daloglu reports, Erdogan’s popularity seems to have survived intact. How did perceptions become so detached from reality and the focus shift so drastically in just one month?

To answer this question, one needs to look at how the AKP government has dealt with the two major corruption crackdowns on Dec. 17 and Dec. 25 and other aftershocks such as trucks suspected of carrying weapons to Syria, allegedly initiated by the parallel state. The AKP’s response has been heavy-handed and uncompromising, and its most effective methods so far have been reassigning judges, prosecutors and security forces to different posts. A common joke goes that now the traffic bureau is overloaded by "parallel state" (Gulen movement) members. This is because officers in prominent offices such as those dealing with smuggling and terrorism have been relocated to less influential positions, traffic being one of them.

To understand how effective these “reassignments” have been — and many pundits agree that the process is not yet complete — we must look at the numbers. The data on the dismissal and reassigning of judges and prosecutors is available from official sources. On Jan. 21, 97 prosecutors and judges were removed from their posts. On Jan. 15, 20 judges and prosecutors were reassigned, and three prominent ones were placed under investigation. Justice Minister Bekir Bozdag initiated an investigation into three prosecutors: Zekeriya Oz, Muhammer Akkas and Celal Kara.

Kara, working under Oz, was responsible for opening the Dec. 17 graft probe, which involved the sons of three ministers. Oz was particularly well-known for his involvement in the notorious Ergenekon case concerning high-ranking military officers. Now, Oz himself is under investigation for bribery. Akkas, also known for his involvement in the Ergenekon case, was responsible for the Dec. 25 probe wave, which was stillborn because the government immediately relieved him from the case. Along with the resignation of four ministers, the AKP reshuffled the cabinet and the security and judiciary. The judiciary reshuffle is well-documented. Also, on Jan. 21, the parliament started discussing the AKP’s bill to restructure the Supreme Board of Judges and Prosecutors (HSYK), Turkey’s highest judicial body. The draft bill would give tight control over the composition of HSYK to the government. Many Turkish and foreign jurists warn that the bill is an attempt to end the independence of the judiciary and the de facto and de jure separation of powers. Although some suggest President Abdullah Gul will veto if the bill passes, we should note that this would be a groundbreaking moment, as Gul rarely uses his veto power. No one is able to provide a clear answer to how the different branches can provide oversight over each other in the Turkish political system.

In an effort to understand the pattern and analyze the numbers, I started searching for a day-by-day breakdown of the purging process, hoping to present my findings with nice charts. Rengin Arslan, a journalist who has been reporting on the matter, said, “One of the officers told me they have just learned about eight reassigned officers from the Black Sea region, but it was not reported in the media at all.” As Arslan and others told Al-Monitor, we will never know the exact scale of the purging until official numbers are released.

However, here are some facts to consider. When posts are reassigned, it is normally done in the summer months, mainly to let the families adjust. Most of the officers to be transferred now are going to other cities. Most of the reassignments are demotions. The following bureaus have been most affected: Smuggling and Organized Crime, Terrorism, Intelligence and Cyber Security. The first of these reassignment orders arrived on Dec. 18, with reassignments for only 48 officers. The process snowballed and as of Jan. 23, the numbers had reached 5,000. This is about 2% of the total active-duty police officers in Turkey.

About 3,000 of these officers were taken from posts in three major cities: Istanbul, Izmir and Ankara. Istanbul leads with 1,612 reassigned officers, and the capital city, Ankara, follows with 1,140 officers reported so far, but almost every city in Turkey has been affected by this process.

The bureaus that initiated the first and second major waves of the graft probe and MIT (Turkish intelligence agency) truck searches are reported to have undergone a “complete personnel change.” Indeed, the news report highlighted that even a canine trainer and cayci (tea server for the officers) were reassigned. So the purging process is not exclusively for police officers, but all personnel who happened to be working in bureaus involved in corruption investigations are being punished.

Decoding a pattern behind and reasoning for this purging process has been rather difficult. One question that lurks in the background is: How could all these critical bureaus be in the hands of members of a “parallel state” for so long? Second, why were many officers who were relocated in December again reassigned from their new locations after Efkan Ala, the new Turkish interior minister, assumed his post? Lastly, does reassignment address the "problem" if these officers are high-risk members of the police force? If they belong to the Gulen movement, shouldn't they be taken off the force?

With no answer to these questions, we should note that the process of relocating judges, prosecutors, police officers and other personnel serves a couple of purposes: It serves as an intimidating warning for incoming personnel that if they go against the AKP government, they will be punished. It also efficiently erases institutional memory and generates serious gaps in crucial areas of the police and judiciary. All newcomers will have a steep learning curve to catch up. Intriguingly, one officer who was relocated after the investigation started sued the government and won. Pundits argue this could set a legal precedent for thousands of cases to follow, which would be costly. In addition, the AKP is considering introducing crucial limitations to the jurisdiction of the police force.

Perceptions of success or failure indeed make history, and Erdogan knows this well. As he keeps repeating, “This is a war of perception.” I agree with Erdogan. It is a rather dangerous battle for survival by the prime minister, a war that is already taking its toll on all state institutions and will likely have unintended consequences for the country’s stability in the near future.