Does Erdogan's attack on judiciary reflect his view of Turkish democracy?

The Erdogan government's evasion of the corruption investigation increases the risks to Turkey's unity and peace. 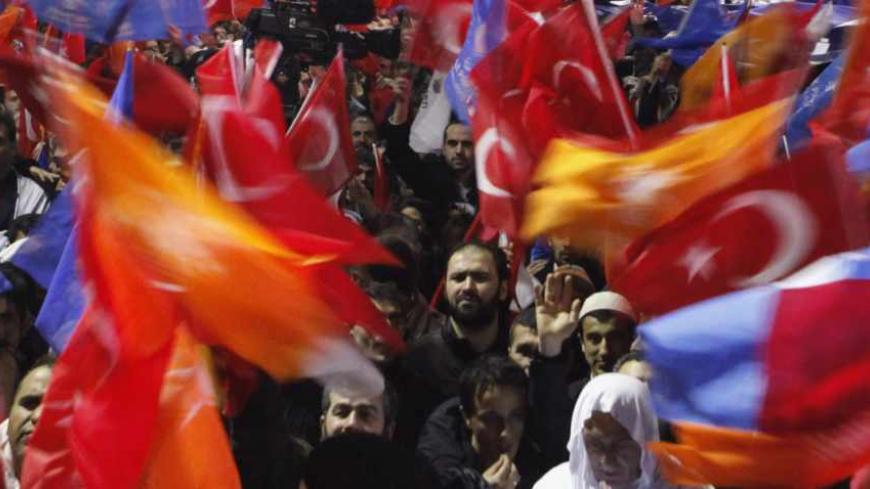 Faced with a serious corruption scandal, Erdogan took a firm position against the criminal justice system. Muammer Akkas, the prosecutor who was overseeing the graft probe, was removed on Dec. 26. Akkas issued a written statement on the same day directly accusing the Erdogan government of interfering with the judiciary. He called upon all those responsible in the judicial system to take a stand in favor of upholding the highest standards of the rule of law.

“Court orders have not been carried out and there has been open pressure on the judicial process from both the chief prosecutor’s office and the police force, which is supposed to carry out the decisions of the courts,” Akkas wrote in his statement.

He made a second appeal on Dec. 30 by releasing yet another written statement, stressing, “I did not leak any information or document about this investigation to any unauthorized individuals. People should question those [the police] who did not carry the prosecutor’s order in regard to the violation of the secrecy code of the investigation.” Akkas was responding to Erdogan’s accusations about his professionalism.

“There is an international, national plot behind these latest events. A prosecutor comes up and uses his authority in a different way,” Erdogan said on Dec. 29. “He is turning people into scapegoats by sharing secret documents with those media siding with him. He is crying out because the chief prosecutor removed him from the case. Hold on a second, we haven’t yet finished with you!”

What trumped up this personal duel between a public prosecutor and the prime minister is that on Dec. 25, Akkas ordered a second wave of the operation, which brought into the spotlight a number of key names in the business sector known as being close to the Erdogan camp. There was also an order to bring the prime minister’s son Bilal Erdogan to the prosecutor’s office for questioning. Police, however, refused to carry out the order.

In the meantime, the government released an executive order making it legally binding for police officers and prosecutors to notify their superiors — therefore the government — of investigations in a move aimed at curbing independent probes by public prosecutors. Turkey’s Supreme Board of Judges and Prosecutors (HSYK) overturned the decision in the name of upholding the constitution. The government objected to the HSYK’s decision and took it to the Council of State for review. The HSYK, however, made its decision public on its official online site before the higher court decided the case. Erdogan got angry with the HSYK:

“I am now making a criminal complaint. The Supreme Board of Judges and Prosecutors committed a crime here. What did they do? While there is an ongoing case at the Council of State concerning the judiciary, they make a statement, and by doing that they violate constitution Article 138. So I am asking you, Who is going to put on trial those in the Supreme Board of Judges and Prosecutors?” he roared. “If I could have done that, I would, but the people will!”

However, this is not the first time Erdogan has challenged the country’s judiciary.

In 2008, Turkey’s chief prosecutor filed a case against Erdogan’s party in the Constitutional Court, alleging that it was fomenting anti-secular activities and asserting that it should be banned from politics. On the other side of the coin, a large-scale investigation had been going on for nearly 10 months in an attempt to expose Ergenekon, described as a terrorist organization inciting anti-democratic activities and seeking to engineer a coup to bring down the Erdogan government. Erdogan lambasted the case against his party and accused the chief prosecutor of bringing politics into legal affairs; at the same time, however, he told the people to “respect the legal process” in the Ergenekon case.

People were picked up from their homes as early as 4:30 a.m. in unprecedented police raids. State-owned Turkish radio and television was used to leak information about critical arrests and accusations in the Ergenekon case, tarnishing people's names — showing no respect for their privacy — helping create an atmosphere of guilt. Although major evidence in the case was found to have been forged, that did not change the outcome. More than 200 military personnel were convicted as terrorists — including Ilker Basbug, the former chief of the General Staff.

However, Erdogan’s chief adviser Yalcin Akdogan surprised everyone when he wrote on Dec. 25 that the movement of Sunni religious leader Fethullah Gulen had “conspired against its own military.” Since that statement, the Turkish military appealed to the president and the prime minister for a retrial of its members behind bars. But what seems to be damaging public perceptions is the disconnect of Erdogan’s frivolous attack on the prosecutors and police officers who unearthed the corruption scandal that came to light this month as compared with his government's lack of empathy for the military at the time of the Ergenekon trials — the military was portrayed to be almost like a bloodthirsty Frankenstein, but still was willing to appear before Turkish judges. And what of the more than 10,000 Kurdish politicians and activists behind bars in Turkey awaiting fair trial? This list could easily be multiplied.

In sum, Erdogan’s attack on the judiciary now is quite telling of his perception of democracy, where he basically hints that he considers himself above the law and fails to grasp that in no democracy is the executive branch of the government supposed to control the judiciary. The more he resists respecting the rule of law and allowing prosecutors to do their jobs, the more the country will grow tense and the divide between the people could reach dangerous levels.

The corruption charges should be considered a serious matter; many Turks are now watching Erdogan’s rallies with deep concern — in particular his show on Dec. 27 upon his arrival at the airport in Istanbul, after a domestic trip, where he was welcomed by thousands of his supporters.

People ask whether Erdogan’s supporters are now coming onto the streets to stand for corruption and prevent justice from taking its course.