Nedim Sener, an investigative journalist who documented the police misconduct that potentially led to Hrant Dink’s murder, is speaking against the Cemaat. 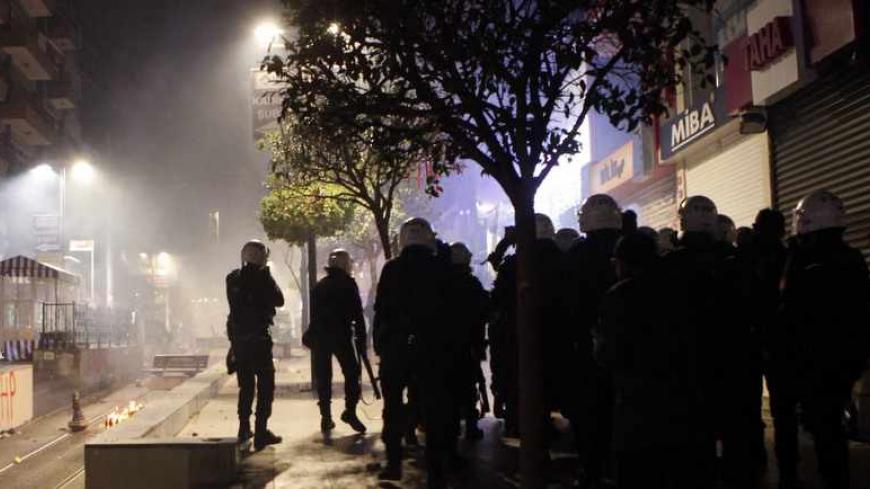 ISTANBUL — Since the massive corruption scandal broke out on Dec. 17, Turkish Prime Minister Recep Tayyip Erdogan has been covertly blaming the Fethullah Gulen religious movement — better known as the Cemaat — painting it as a subcontractor of the United States and Israel, accusing it of engaging in a conspiracy to remove him from power. He even accused the Cemaat — without openly stating its name — of establishing a “state within the state,” and vowed not to allow it to supersede government authority. In short, there is an undeclared but open war between the Erdogan camp and the Cemaat.

Therefore, Al-Monitor decided to interview investigative journalist Nedim Sener. He argues that he has been targeted by the Cemaat and fell victim to a plot by its members in the police and the judiciary, who have tied him to the infamous Ergenekon case, where military officers, intellectuals and other civilians have been convicted of establishing a terrorist organization to bring down the Erdogan government. During those days, the Erdogan camp and the Cemaat were in a relationship of convenience to finish off the military’s tutelage, and Erdogan certainly did not experience discomfort with the Cemaat’s establishment in state institutions. In fact, the Cemaat lived its best years in state institutions since the Erdogan government came to power.

In that light, Sener draws attention to the very fact that the prime minister’s camp knows very well in which occupations and state institutions these Gulen movement members are. “They’re not searching for them with a torch in the darkness and trying to figure out who is from the Cemaat or not. They know very well who is who. They brought them into power in these occupations. And it is easy for the government now to dismiss them. That is why Fethullah Gulen lost control in his latest address to his followers and literally cursed on the Erdogan government,” he told Al-Monitor.

“I certainly don’t believe in the Cemaat’s sincerity in the fight against corruption. Since the day the Erdogan government came into power, there has been corruption. I personally reported them. ... There was, for example, the Deniz Feneri charity [where part of 41 million euros ($56 million) collected for charity from Turks living abroad was used outside its purpose]. The government dismissed those judges who tried to unearth this corruption, and the Cemaat did not express a thing about it then. Why have they become sensitive on corruption today but they were not yesterday! Turkey is not facing corruption charges for the first time. Therefore, we also need to question the Cemaat’s motivation in this setting, as well.”

On Dec. 25, when Al-Monitor sat down for an interview with Sener, Erdogan’s government was facing its first seriously difficult day in power since it took charge over a decade ago. Three cabinet ministers, whose sons were accused in the graft probe, had announced their resignations, and, as we were speaking, news broke that a second wave of the operation was stopped by the government before arrests were made. Erdogan’s sons’ names, Burak and Bilal, were also publicly spelled out for the first time in connection with the corruption ring.

“The government can’t stay in charge after such a scandal. It is best that it resign, but the corruption issue is now secondary. One really needs to see that the Cemaat is actually directly aiming at Erdogan. It simply showcases that it has grown so strong that it can even bring down the country’s prime minister when it wants to,” Sener told Al-Monitor.

“If we are for correcting our state system, for growing stronger in our democracy and for strengthening our judiciary, where individuals are all treated equally before a judge, and where people believe they can find justice when they need it, we also need to stand against this Cemaat establishment in the state institutions. There is a reason why it is grouped in intelligence units and the judiciary. There are video recordings that show Gulen asking his followers, at the least 20 to 30 years ago, to start finding employment in police, judiciary or military. ... He tells them they should stay quiet and not reveal their identities until the time comes. This is scary.”

He added, “When the West looks at them, it sees their movement as an interfaith dialogue group, like a nongovernmental organization. We, however, practice a different reality here. And that gap is the problem in trying to explain to outsiders as to why this movement is not what it seems. There are many more religious movements in this country, and people don’t have an issue with them. But the Cemaat is a different story. It has grouped in intelligence departments of the police, in the judiciary and elsewhere. And it shapes our political life with that power. This rises as a direct challenge to our individual liberties. ... The Gulenists are not trying to establish an Islamic republic or impose Sharia. This is an outright fight for power — it does not have anything to do with God or spirituality. This is all a very earthly matter.”

An award-winning, internationally recognized investigative journalist, Sener documented in his 2009 book The Dink Murder and Intelligence Lies that police officers who conducted the Ergenekon investigation should also be put on trial in the Hrant Dink case. The book put him under a dangerous spotlight, and he believes that the Cemaat set a plot for him, tying him to the Ergenekon case. He was jailed for over a year in pretrial detention and released in March 2012 pending a trial that seeks a 15-year imprisonment. Now, hear Sener as he describes why the 2007 murder of Dink, a beloved Armenian Turkish journalist, is linked to this case, and that to see the big picture we need to factor this part of the puzzle into the equation:

“When we talk about the Ergenekon operation, Ali Fuat Yilmazer — who was head of the police intelligence department, later assigned as the deputy security director [in Istanbul police] — had an exceptional, close relationship with Erdogan. Whenever the prime minister was in town, they used to get together while the ministers had to wait sometimes for two weeks to get an appointment with Erdogan. He was one of the key members of the Cemaat [in the police]. And he was also the man who led the Ergenekon operation. He was known as the brain of the operation. So, who was he? Along with Ramazan Akyurek, head of the Trabzon Security Directorate, who was also a member of the Cemaat, he was a man who carried responsibility in the Dink murder.

“What happened to Yilmazer? Two days after we were arrested [in March 2011], he was dismissed. Since I was arrested, I have been saying that there is a conspiracy against me, and I continue to say the same thing. Yilmazer tried to take his revenge on me, because I documented in my book that he committed professional misconduct and therefore [was] indirectly responsible for Dink’s murder. The prime minister signed a report on Dec. 12, 2008, stating that very fact.

“Twenty days after we were arrested, they also dismissed [Ergenekon special prosecutor] Zekeriya Oz. These are — Yilmazer and Oz — really critical names. There is no need to doubt that they are both members of the Cemaat. And they did not forget what happened to them, and started to prepare for [this] operation aiming at the prime minister with all those others within the police and the judiciary. They took the first strike on Feb. 7, when they invited Hakan Fidan [head of National Intelligence Organization and a close confidant of Erdogan] to answer some questions [regarding the Oslo talks with the Kurdistan Workers Party (PKK)].

“The day when these people stand trial before a judge, we will only then start to understand what kind of a power there was behind Dink’s murder. We did not even start to discuss this issue with all sincerity. The public may not yet be ready to face the truth. But I documented the misconduct. ... Father Andrea Santoro was killed in his church in Trabzon when Ramazan Akyurek was the security director there. These murders were essential to set the stage for the Ergenekon operation. They needed some provocative actions to create public uproar.

“Once you look at the big picture, you start sensing the big network behind Dink’s murder. The issue is that this intelligence head and security director had access to critical knowledge from both sides — the victims and their murderers. Once you put all these facts on the table, and still do not do a thing to prevent these murders, you then need to question as to why they did not do a thing about it.

“They put me into a trap because I proved this scenario with documents — all based on facts. I am not talking about a scenario that does not have a solid ground. I documented this in my book, and that is why they threw me in jail. My case is still pending, and I may be imprisoned for 15 years — for being a member of Ergenekon.

“People need to acknowledge the two wrongdoings here: Corruption is wrong, and what the Cemaat is doing is also wrong.”