The family of Hrant Dink issues an open letter of indignation after an appeals court decision that his case be reviewed, six years after the murder. 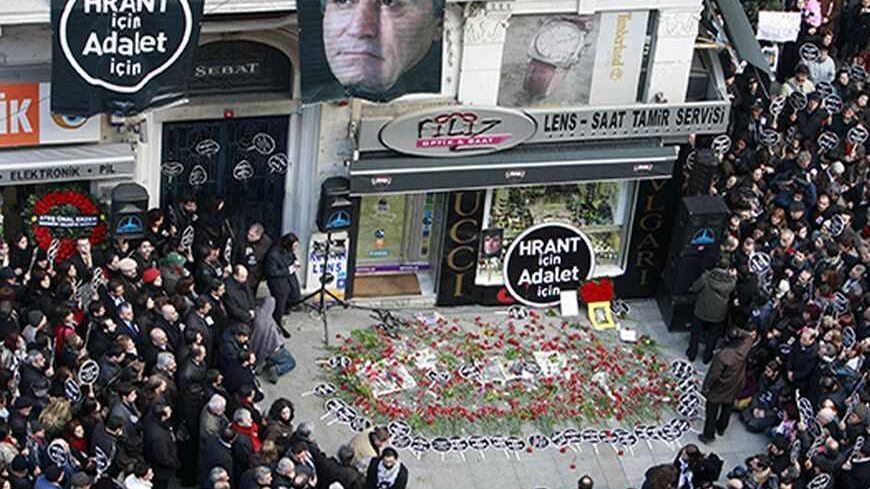 Protesters gather in front of the office of the Agos newspaper during a demonstration in Istanbul Jan. 19, 2009, to mark the second anniversary of the killing of Armenian-Turkish editor Hrant Dink. - REUTERS/Osman Orsal

It was an assassination that left an extraordinary mark on the Turkish judiciary, justice and public conscience. So did the tragedy it symbolized. With the case of Hrant Dink returned to ground zero six years after the murder, the victim’s family lost its patience in an open letter.

Hrant Dink, editor of the weekly Agos, the voice of Turkey’s Armenian community, was gunned down on Jan. 19, 2007, in a busy Istanbul street by a young man named Ogun Samast. The murder reverberated beyond Turkey’s borders in a matter of hours.

Dink was the 62nd journalist to be killed in Turkey since a libertarian constitution was introduced in 1908. Yet, because of his Armenian background and much-admired courage, along with the reform process Turkey was undergoing, his murder trial, which opened in July 2007, became the most significant litmus test for Turkish justice. Exasperated by a spate of murky political murders in the 1980s and 1990s, and encouraged by government statements, the Turkish public saw in the trial a “threshold of hope.”

The Dink family hoped that the judicial process would uncover the assailant’s links to “shady deep state” mechanisms — a “terrorist organization” structure — that they believed was behind the murder.

In the months leading up to the assassination, Dink stood trial three times for “insulting Turkishness,” under the infamous Article 301 of the penal code, and was convicted in two of the cases. He was summoned to the Istanbul governor’s office, where members of the intelligence service, MIT, “cautioned” him over Agos stories. Shortly before his murder, far-right types were spotted around the Agos office, and the newspaper was flooded with threats to “shut up.”

The case of his murder gradually transformed into a tussle between the judges and the Dink family’s legal team as evidence was presented and rejected and the process dragged on. Many of the requests by the Dink lawyers were either turned down or lost in the labyrinth of red tape. After six years, the case wrapped up with 18 convictions for “ordinary murder.”

The Supreme Court of Appeals has now deepened the family’s tragedy, overturning the lower court's rulings and ordering a review of the case. It rejected the argument that a “state-harbored terrorist organization” was behind Dink's murder, holding that the suspects should be retried on charges of belonging to an ordinary criminal organization, that is, a mafia-style enterprise.

In a dramatic move, Dink’s devastated wife and children released an open letter to the Turkish public and international audience.

“As the Dink Family, we will no longer be a tool in the game of state structures that insults us and will not attend the hearings of the review of the murder case,” the letter stated. It further read, “Since the slaying of Hrant Dink on January 19, 2007, the system in Turkey — with its judiciary, security forces, military and civilian bureaucracy, and political institutions — has all but mocked us. While pretending to pursue justice, the criminal alliance called the state re-committed the murder day by day, hearing by hearing, over and over again. This alliance is the very crime syndicate that planned the murder and then covered it up. … No effective investigation was conducted at any stage of this case. The biggest insult, however, came from the court when it ruled that no organization was involved in the murder.”

The Dink's letter leveled harsh criticism at the government of the Justice and Development Party (AKP): “In this case, political will was the only thing necessary to uncover the state’s murder mechanisms and the criminal alliance. Despite all its public statements and pledges, the government persistently refrained from displaying political will. Far from pursuing the case as a ‘matter of honor,’ the government chose to use the murder — perpetrated during its own rule — as a trump card to prosecute offenders only when the gun was pointed at itself. It boasted, ‘No murder has remained unresolved during our term,’ ignoring the slaying of the only Armenian in republican history who had waged a vocal struggle for human rights. We are no longer part of this show. We have no expectation from anything in which the state is either in front of or behind the curtain.”

Last week, one of the Dink family’s attorneys, Fethiye Cetin, published Utanç Duyuyorum (I Feel Ashamed), a book recounting how the case proceeded. She argues that it is extremely unlikely that justice will prevail unless public pressure cranks up.

Cetin complains of apathy on the part of the powerful Istanbul Bar Association because of Dink’s Armenian heritage. She also argues that the prosecutor, Zekeriya Oz, known for investigating coup networks, such as Ergenekon, was hampered by the “deep state” and that collusion between the state and the elected government was instrumental in covering up the murder. The book provides a detailed accounting of these arguments.

An analysis published Sept. 19 by Radikal, which has closely followed the case, contained a startling assessment: “All public servants suspected of involvement or negligence in the murder have been promoted. [Former Istanbul governor] Muammer Guler became interior minister, while [former Istanbul police chief] Celalettin Cerrah was appointed governor of Osmaniye. The then-Trabzon police chief, Ramazan Akyurek, and Engin Dinc succeeded each other in ascending to the helm of the police’s intelligence department. Avni Usta, who had filed the criminal complaint against Dink under Article 301, became the police chief of Sirnak. Nihat Omeroglu and Muhittin Mihcak, who were instrumental in the Appeals Court’s decision to uphold Dink’s conviction under Article 301, were elected public ombudsman and deputy public ombudsman, respectively. The head of the appeals court, Hasan Gerceker, ascended to the Arbitration Board, and Hasan Erbil to the chief prosecutor’s office. … The [implicated] policemen never appeared before court. And the investigation into public servants continues under the veil of secrecy.”

Dink devoted his life to trying to improve the conditions of Turkey’s 70,000-strong Armenian minority, the normalization of ties between Turkey and Armenia, Ankara’s recognition of the great Armenian tragedy in 1915 and rapprochement between Turkey and the Armenian diaspora.

With the seventh anniversary of his murder approaching, there is no visible progress in any of these areas. Similarly, there is no mention of Armenians in ongoing speculation about the prospective democratization package, whose official announcement has been postponed until late September. The only positive development so far has been the return of about one-fourth of the properties the state had seized from non-Muslim minorities.

The Armenians are divided over AKP rule. Some complain about the slow pace of reform, while others refrain from criticizing the government on the grounds that they are better off compared to in the past. On the political front, Turkish-Armenian normalization remains “on the shelf.” The issue has moved down on Turkey’s foreign affairs agenda, now overwhelmed by the Middle East, and there is no sign of when it will be taken up again.

In the meantime, the 100th anniversary, in 2015, of the Armenian deportations is approaching. The current inertia is of no help in dispelling the mistrust of the Armenian diaspora. One does not have to be clairvoyant to see that the course of the Dink murder case will be of crucial significance for those who expect a multifaceted opening in Turkey’s ossified Armenian problem.