Is Turkey Overcoming The Armenian Taboo?

Turkey is changing from a country where the phrase "Armenian question" was never mentioned to one where groups are marching in the street using the term "Armenian genocide," writes Orhan Kemal Cengiz. 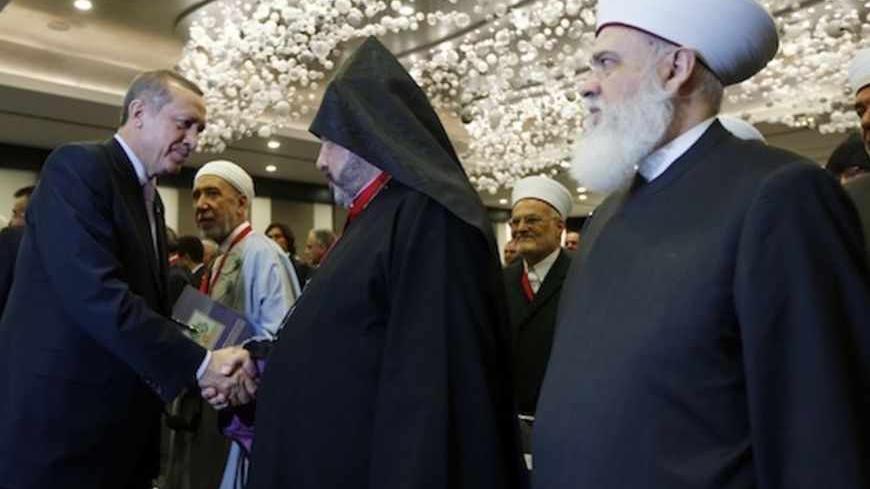 Turkey's Prime Minister Recep Tayyip Erdogan (L) shakes hands with Archbishop Nourhan Manougian, patriarchal vicar of the Armenian Patriarchate of Jerusalem, during an international conference on the Arab awakening and peace in the Middle East in Istanbul, Sept. 7, 2012. - REUTERS/Murad Sezer

Until recently, the Armenian question was a dreadful taboo that couldn’t be spoken about in Turkey. If you talked about it, you could be prosecuted, receive endless threats and even be physically assaulted.

It was impossible to carry out a reasonable debate that went beyond the official state narrative — that the Armenians were deported in 1915 because of the circumstances of World War I.

Also that year, Orhan Pamuk, Turkey’s only Nobel Prize-winning novelist, told the Swiss periodical Das Magazin: “On this soil, 30,000 Kurds and one million Armenians were killed.” He was threatened with charges based on article 301 of the Penal Code, which bans denigrating Turkism. A short time later, largely because of the court case and threats he received, Pamuk left the country.

Those who filed complaints against intellectuals were the same people who congregated in front of the courts to insult the defendants when the cases were brought to trial. Many of these people were eventually detained and imprisoned, starting in 2008 with the Ergenekon case that tried those accused of planning coups against the government. Prosecutors charge that these people collaborated with military personnel planning coups. Although the Ergenekon trials are heavily criticized, it is generally agreed that threats and assaults have declined against religious minorities and intellectuals who express views challenging official narratives.

Three factors have contributed to ending the Armenian taboo and ushering Turkey into its current environment of free debate. The first was the serious blow inflicted on “deep state” structures with military personnel at their cores. The second was the emotional rupture caused by Dink's murder. Protests with hundreds of thousands of marchers carrying placards reading “We are all Armenians” illustrated that a sizable segment of the population didn't subscribe to official state narratives. The third important factor was the government decision in 2008 to amend the infamous article 301 of the Penal Code, to require permission from the Ministry of Justice for court cases under this article. This “filter” has made it difficult to try people under that article.

Because of these changes, the serious taboo on the Armenian issue no longer exists, and changes that were impossible to dream of a decade ago have become a reality. Since 2010, on each April 24, those who lost their lives in Turkey in 1915 are remembered in public meetings held in the streets and halls.

The change of language of the announcement used by the Dur De [“Say Stop to Racism and Nationalism”] initiative, which organizes these meetings, helps demonstrate the gradual erasing of the Armenian taboo in Turkey. In 2010, the announcement of the commemorative events began with the words, “This pain is our pain.” In the text, the events of 1915 were described as "the great disaster," the Turkish equivalent of the phrase "Meds Yegem" used by Armenians. Cengiz Algan, spokesman for Dur De, says they received many threatening messages despite that "soft terminology." The language became "clearer" over the years, and the number of threats declined. On the 2011 announcement, the title said only "April 24, 1915." The text read, "This is the date when the extermination of the Armenians began." The title of last year's announcement read, "This is a pain of all of us," while the text spoke of the tragedy of the Armenian people at length. The text of this year’s announcement is even more daring. It begins, “We are remembering the victims of genocide,” and it continues, “With the campaign of extermination that began on April 24, 1915, the Armenian people were eradicated en masse.”

Algan provides interesting statistics about these commemorative meetings. In 2010, the only meeting was in Istanbul, and between 700 and 800 people participated. In 2011, meetings were also organized in Ankara and Izmir, and roughly 2000 people participated in the Istanbul meeting. Last year, Bodrum and Diyarbakir were added as locations, and the number of participants in Istanbul rose to 3000. Algan notes that initially Armenians living in Istanbul were reluctant to participate, but they are increasingly coming. Every year, these meetings are protested by right-wing and left-wing nationalists. Algan says this year they expect an even larger attendance at the meeting, including participation of Armenians from abroad, and they expect the usual protests. The police will provide a human buffer between the protesters and participants in the meeting. Algan says each year his organization gets in touch with state officials during their planning process, and every year they get a better reception.

Turkey is changing from a country where the very term "the Armenian question" couldn’t be uttered, to a country where groups are marching in the streets referring to the "Armenian genocide." We'll have to wait to see whether these changes will radically alter the state's official policies — for example, resulting in an apology and compensation to the Armenians for 1915. But until then, it will be interesting to observe the commemorative meeting on April 24 in Istanbul.

Orhan Kemal Cengiz is a human-rights lawyer, columnist and former president of the Human Rights Agenda Association, a Turkish NGO that works on human-rights issues ranging from the prevention of torture to the rights of the mentally disabled.