Prosecutors have renewed their use of an infamous article of Turkish law to punish the "crime" of denigrating the Turkish nation. 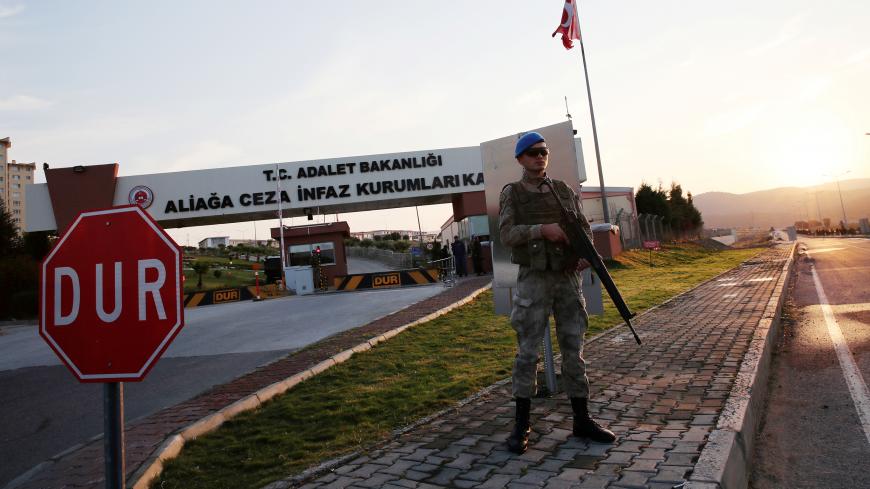 Turkey has taken another step back in human rights by repressing freedom of expression with a code that carries such stigma it has proved deadly.

In the early 2000s, it was almost routine for writers and intellectuals in Turkey to appear in the corridors of courthouses, one after another. At times they would have to deal with the insults, taunts and threats of angry mobs waiting there for them. The accusation against them was usually the same: denigrating the Turkish identity and the Turkish state under the infamous Article 301 of the Turkish penal code.

Many endured the painful process, from Nobel laureate Orhan Pamuk to Booker Prize nominee Elif Shafak, from veteran journalist Hasan Cemal to writer Murat Belge. The sudden flux of intellectuals on trial then was not a coincidence, but signified the resurgence of a taboo against the mere mention of one issue: the 1915 Armenian genocide.

Prosecutors initiated an Article 301 investigation against Pamuk because of his remarks during a 2005 interview in which he said that “30,000 Kurds and a million Armenians were killed in these lands and nobody but me dares to talk about it."

Armenians and many historians contend that 1.5 million Armenian citizens of the Ottoman Empire were killed in 1915. Turkey admits that hundreds of thousands of Armenians died during the period as a result of wartime clashes between Muslims and Christians, but denies that the killings were systemic and amounted to genocide.

Luckily, these intellectuals were able to complete their trials without sustaining bodily harm, and most were acquitted or got lenient punishments that were postponed.

However, that was not the case for Armenian-Turkish journalist Hrant Dink, who was tried on the same charge as Pamuk, but paid with his life. Dink had written a series of articles in 2004 on the Armenian genocide and Armenian diaspora in Agos newspaper, where he was editor-in-chief. At one point he used the following sentence, which would later be distorted to a great extent:

"The clean blood that will fill the vacuum of poisonous blood emerging through the lack of the ‘Turk’ is present in the noble vain that will be established by the Armenian with Armenia."

Prosecutors presented his statement, out of context, as meaning Turks' blood is poisonous. But for those who read his articles as a whole, it was evident that by “poisonous blood,” he meant that the Armenian diaspora needed to rid itself of its obsession with or hatred of Turks, which they harbored because of the trauma of genocide.

As the trial commenced, he faced a torturous gauntlet each day. “Hrant Dink had to walk to the courtroom through a line of police, accompanied by his lawyer. As he passed, people tried to attack him, insulted him and spat at him. A group of people who were allowed to enter the courtroom threw coins and pens as well as insults and threatened the lawyers," according to a biography. He received hundreds of threats.

During the trial, experts submitted their opinions stating there was no insult to "Turkishness" in his articles. However, the court disregarded these opinions and sentenced him to six months in prison under Article 301. The decision was upheld by the Turkish Appeals Court.

For an Armenian — especially one who "insulted Turks" — the six months turned out instead to be a death sentence. A 17-year-old ultranationalist, Ogun Samast, shot Dink multiple times in the head and neck in front of the Agos newspaper building Jan. 19, 2007. He said Dink’s insult of the Turkish nation provoked him.

Dink's assassination spurred wide public debate on Article 301. The European Union pressured Turkey to do away with the article, but the government merely amended it instead. Under the revision, made in April 2008, the words “Turkishness” and “Republic” were replaced by “Turkish nation” and “State of the Turkish Republic." The maximum sentence was reduced from three years to two. To investigate alleged crimes under Article 301, prosecutors first had to obtain the Ministry of Justice's permission.

Article 301 came under the court's scrutiny again when Turkish historian Taner Akcam, who has written extensively on the Armenian genocide, brought a case against Turkey. In its 2012 final ruling, the court found Turkey guilty of violating freedom of expression. It ruled, first of all, that the way Turkish courts interpreted the article did not allow the person concerned to foresee its consequences. It noted that any opinion or idea that is regarded as offensive, shocking or disturbing could easily become the subject of a criminal investigation by public prosecutors.

What the court said, basically, is that Article 301 is too vague and is used as a pretext to punish those whose statements deviate from the official line of Turkish state.

The Ministry of Justice officially denied permission to investigate under Article 301 for some time, and it was forgotten for a while. But since 2017, it's been put into use again. The Human Rights Association, Diyarbakir Bar Association and lawmaker Garo Paylan, who is of Armenian descent, were all investigated and tried for supposedly insulting the Turkish nation for criticizing some operations of security forces and for statements about the Armenian genocide.

Turkey’s January 2018 incursion into Afrin in northeast Syria brought renewed use of the article. News stories exposing human rights violations during this operation were regarded as insults to the Turkish nation and the state.

Turkey's Oct. 9 invasion of Syria, which has garnered harsh criticism from human rights organizations, has also triggered a new wave of prosecutions under Article 301. Some people have already been sent to prison for their criticism of the operation.

Among the most notable of these prosecutions is the one against parliament member and human rights lawyer Sezgin Tanrikulu, vice chair of the opposition's Republican People's Party (CHP). Tanrikulu criticized the military operation, saying, "The government needs to know that it is an unjust war; it is a war waged against the Kurds." An Ankara prosecutor decided these remarks were an insult to the Turkish state.

The investigation into Tanrikulu rekindles memories of how Dink was turned into a target under this article. Tanrikulu protested the investigation, saying on Twitter, “One of the ‘assassins’ in Hrant Dink's murder, the symbol of the deep darkness 301, has now been reactivated.”

Turkey's renewed use of Article 301 as a weapon against critical voices should set off every alarm to protect freedom of expression. The article does not meet the standards of the ECHR. These investigations clearly contradict the intent expressed in the government's current judicial reform package.

And as Dink’s murder proved, being investigated under this article is not only a blatant violation of freedom of expression, but a serious threat to the life of the person concerned.