On the 10th year anniversary of the murder of prominent Armenian-Turkish intellectual Hrant Dink, Turkey appears further from reconciling with its past. 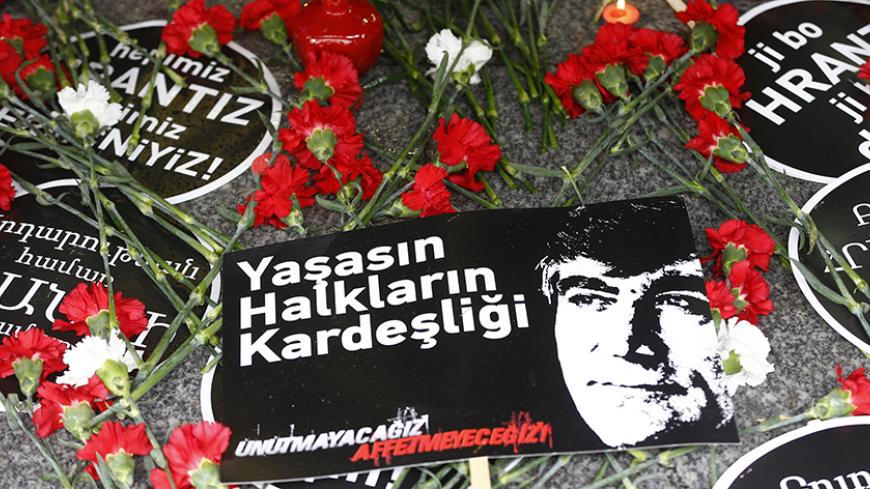 During a commemoration to mark the 10th anniversary of the assassination of Turkish-Armenian journalist Hrant Dink, carnations and placards are laid on the spot where he was killed, Istanbul, Turkey, Jan. 19, 2017. - REUTERS/Osman Orsal

For the past 10 years, Jan. 19 has been an unforgettable date for some Turks. But this year was more meaningful because it was the 10th anniversary of the assassination of Armenian-Turkish journalist Hrant Dink. As founder and editor-in-chief of bilingual weekly Agos, Dink was a renowned intellectual who was gunned down in daylight on Jan. 19, 2007, on the sidewalk near the entrance to his office located in one of the most crowded districts of Istanbul.

In a rapidly changing country like Turkey, Dink's name has become a symbol for taboo-breaking developments. His funeral on Jan. 23, 2007, was a revolt against the religious nationalism embedded in Turkish society's psyche that had blinded it for generations.

The procession moved from the place where Dink was killed to his burial place many miles away, with almost 200,000 people solemnly following his coffin. The tunes of the traditional Armenian flute known as "duduk" accompanied the crowd. The occasional thunder of the chants — "We are all Armenian" and "We are all Hrant!" — coming from tens of thousands of dignified marchers intermittently broke the silence of the melancholic songs.

The event was unprecedented. Dink seemed to realize the cause of his lifelong struggle in death: Turks reconciling with history and truth, which would lead to a rapprochement between Dink's Turkish compatriots and Armenians — Dink's ethnic brethren and co-religionists.

One of Dink's close friends, Baskin Oran, recalled in an article commemorating the 10th anniversary of his death as follows: "His only goal was to bring the two peoples [Turks and Armenians] closer. … He used to be averse to draft resolutions [recognizing the events of 1915 as the Armenian genocide], but as a member of the Anatolian Armenian community that had suffered horrific sorrow, Turkey's denial of 1915 upset him. That is why he said, 'I will go to Paris and stand on a rock at Concorde Square and shout: Genocide didn’t happen. And then I will return to Ankara and shout standing on a rock in Kizilay Square: The genocide did happen.'"

By getting killed for his cause, Dink seemed to have achieved what he aspired toward throughout his lifetime. He was an affectionate, energetic, dedicated comrade and friend for a small circle of people who had known him closely. Yet, after his death, he has become a larger-than-life figure for millions of people, most importantly for Turks.

Dink's assassination brought forth the feeling of embarrassment that could not find an outlet in the shameful episode of Turkish-Ottoman history. It also triggered the need to question the truth of the Turkish state's official narrative, the need to open up new and clean pages, namely, the necessity to reconcile and establish peaceful relations with everyone in Turkey's troubled neighborhood.

Indeed, if it wasn't for Dink's assassination, perhaps Turkish intellectuals would have never mobilized in December 2008 to sign a petition apologizing for the tragedy that had befallen Ottoman Armenians in 1915. The campaign was initiated by a group of Turkish intellectuals, many of whom were also close friends of Dink.

The text of the petition, titled "I apologize," was as simple as its title: "My conscience does not accept the insensitivity showed to and the denial of the Great Catastrophe that the Ottoman Armenians were subjected to in 1915. I reject this injustice, and for my share, I empathize with the feelings and pain of my Armenian brothers. I apologize to them." In one month, some 32,000 Turks signed the online petition.

In hindsight, we can see that those days were the "gilded age" of Turkish liberal thought and intellectual action. Yet, it also revealed how deep cleavages within the Turkish polity could illuminate the current power configuration that emerged in the wake of Turkey's failed coup of July 15, 2016.

Recep Tayyip Erdogan, who was prime minister at the time, got furious with the 2008 campaign. With an apparent nationalist bias, he lashed out at the campaigners: "I neither accept nor support this campaign. We did not commit a crime, therefore we do not need to apologize. It will not have any benefit other than stirring up trouble, disturbing our peace and undoing the steps which have been taken. … It must be those intellectuals who had committed the genocide as they are the ones who are apologizing."

Erdogan's then-former opponent and now current close ally Devlet Bahceli, who leads the Nationalist Movement Party, was on the same page as the prime minister. "No one has the right to insult our ancestors, to present them as criminals and to ask for an apology," Bahceli had said.

Yet, in the wake of Dink's assassination, groundbreaking developments took place in Turkish-Armenian relations. In September 2008, Turkish President Abdullah Gul had initiated a normalization process with Armenia through so-called "soccer diplomacy," visiting the Armenian capital, Yerevan, to watch a soccer match between the national football teams of the two countries. By Oct. 10, 2009, that process led to the Zurich Protocols, a road map for the normalization of relations between the two countries. US Secretary of State Hillary Clinton, Russian Foreign Minister Sergey Lavrov, EU High Representative Javier Solana and French Foreign Minister Bernard Kouchner were present at the signing ceremony in Switzerland.

Unfortunately, the high hopes of those days died quickly. Even with the presence of such an impressive group of international intellectuals, the normalization process, Dink's biggest dream, did not survive.

Dink’s murder trial gradually degenerated into squabbles among the state's security institutions — ranging from the police to gendarmerie and to the national intelligence. Depending on the prevailing political climate of the day, each group blamed the other.

As a matter of fact, Rakel Dink, Hrant's widow, speaking to the people gathered on the 10th anniversary of his assassination at the location where he was gunned down, said, "The culprit of this murder seems to be, with all of its related institutions, the [Turkish] state itself! The conscience of the people does not need anything else to understand this fact except watching all the disgrace revealed."

In today's Turkey, it takes courage to speak in the way Rakel Dink speaks. On the 10th anniversary of his assassination, Dink's legacy is under threat, as the case of Garo Paylan shows. Paylan, who was one of those young Armenian-Turkish organizers at Hrant's funeral procession 10 years ago, is now a member of parliament from the Peoples' Democratic Party. A few days before the anniversary, he addressed the Turkish parliament and pronounced the "g-word." He was dismissed for three successive sessions of the legislative body, and his speech was removed from the minutes as if he had not spoken at all. Paylan now receives threats.

Despite the brief rosy period in the immediate aftermath of Jan. 19, 2007, the 10th anniversary of Dink's assassination regenerated the prevailing sentiment of the Turkish intelligentsia, of whom Dink was a prominent member, on their country's state of affairs: the myth of Sisyphus.

In Greek mythology, the King of Ephyra (in today's Corinth) Sisyphus was made to endlessly roll a huge rock up a steep hill. And as he came close to the summit, he would see it fall back to where he had started.

In her article for Agos on the 10th anniversary of Dink’s assassination, Tuba Candar, Hrant's only biographer, argued that Dink's legacy bears a similarity to the myth of Sisyphus. On the 10th anniversary of his death, Dink's memory is still alive. But it is highly doubtful if his hopes are. For most Turkish intellectuals, despite the passing of a decade, it still feels like they are back to square one. If the myth of Sisyphus is applicable to Turkey, it should be called "The Saga of Hrant Dink."