Some say Erdogan is trying to restore his international credibility. 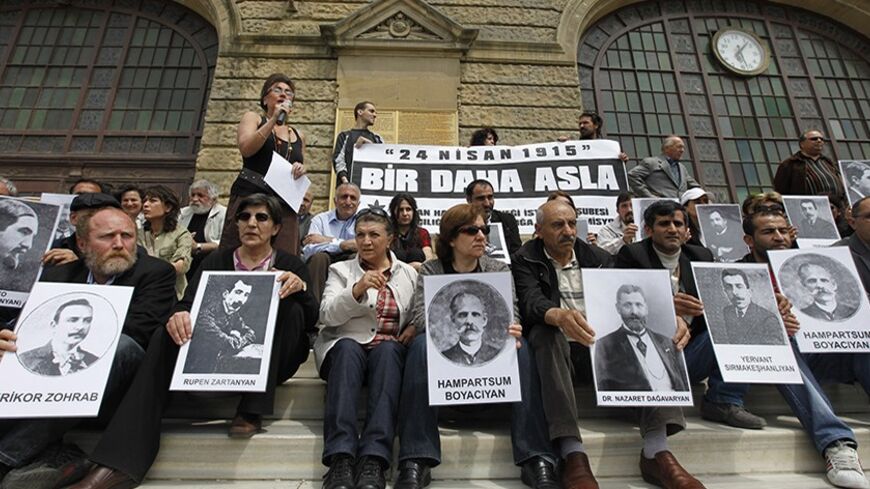 Human rights activists hold pictures of Armenian victims in front of the historical Haydarpasha station during a demonstration to commemorate the 1915 genocide of Armenians in the Ottoman Empire, Istanbul, April 24, 2010. - REUTERS/ Osman Orsal

On a gray Istanbul morning, Raffi Hovannisian, a prominent Armenian opposition politician stood outside the historic Haydarpasha rail station on the Asian shore of Istanbul and began to speak. “It was more than a million and a half lives, it was more than genocide — it was a loss of 3,000 years of schools and churches, an entire civilization and a way of life.”

Hovannisian was speaking on the 99th anniversary of the mass slaughter of more than a million Ottoman Armenians, which most respected scholars (and a growing number of Turks, myself included) say constituted the first genocide of the 20th century. His grandmother was among those who survived, thanks to the “brave Turkish and Kurdish families who saved Armenians' lives.”

For Armenians worldwide, the tragedy began on April 24, 1915, when over 200 Armenian intellectuals, including the world-famous musician Gomidas, were rounded up in Istanbul and brought to Haydarpasha for a sinister journey that, for many, ended in death.

As I listened to Raffi, a treasured friend from my days in the Armenian capital Yerevan, where I spent three exhilarating years from 2007 to 2010, I was filled with a mix of grief and nostalgia but also hope. I say hope because until recently it would have been unthinkable for anyone to utter the word “genocide” in public without being branded a traitor and hauled into court, as Orhan Pamuk, the world-acclaimed Turkish novelist found out.

Not only that, a day earlier, Turkey’s Prime Minister Recep Tayyip Erdogan issued an official statement to mark April 24. The text, published in nine different languages (including Eastern and Western Armenian) parroted the official version of events, denying in effect that the deliberate ethnic cleansing of Christians had ever taken place. Yet, Erdogan acknowledged the suffering of the Armenians, offering condolences and signaling that from hereon, free and unfettered debate of 1915 was acceptable.

What rendered the statement extraordinary was that Erdogan made the comments in his capacity as the prime minister of the Republic of Turkey — a first for any Turkish government leader. This, in turn, means that Turkey’s official policy is shifting and that it is no longer imponderable that Turkey may some day offer an apology and make amends for the horrors of the past. Turkish officials confirmed that plans are in preparation to offer Turkish citizenship to the descendants of survivors.

Not surprisingly, these moves unleashed a torrent of wildly divergent emotions. Diaspora Armenians, for the most part, expressed wariness and disdain. “Erdogan's message, although unprecedented, is actually far from being sincere. It is void of any true meaning or openness for reconciliation, as it is in fact not a departure from the denialist policy to date of the Turkish government,” Giro Manoyan, a senior member of the Armenian nationalist Dashnak party, told Al-Monitor.

“True reconciliation and friendly relations among century-old neighbors requires a truthful and genuine recognition of the full scale of the suffering of Armenians, not questioning or minimizing it. It is by putting into question that truth or by minimizing it that exacerbates the pain and relations between victims and perpetrators,” he added.

Many Turkish Armenians, however, sounded cautiously optimistic. Raffi Hermonn, a prominent Turkish Armenian intellectual, told Al-Monitor that while Erdogan’s statement fell far short of Armenians' expectations “in the political and legal sense,” it had “on a human level touched us in every way.”

The mood was perfectly captured by the headlines of the Istanbul-based Armenian weekly newspaper Agos, one of which roughly translated as: “The condolence threshold on the road to truth.” Agos’ views carries special weight because its founder, Hrant Dink, was among the first Turkish Armenians to speak openly about the genocide. Dink was murdered in 2007 by an ultra-nationalist youth who is widely believed to have been acting under orders from the Turkish state. Dink’s slaying struck a chord. More than 100,000 people attended his funeral. It was a turning point.

Indeed, it would have probably been impossible for Erdogan to make his statement, no matter how lame, had civil society initiatives spurred by Dink’s death and quietly encouraged by the government, not laid the ground. The April 24 commemoration in Haydarpasha is but one example of a broad swathe of gestures aimed at healing the wounds of the past.

As the veteran Turkish genocide scholar Taner Akcam explained in his column for the Turkish daily Taraf, in some respects the prime minister is catching up with a Turkish public whose fight for truth and justice is merging with that of the Armenian diaspora. This is somewhat optimistic. Most Turks still believe the official narrative that says the Armenians killed as many Turks, if not more, than the Turks killed Armenians as the empire collapsed. And the tired canard that the Armenians continue to plot with Turkey’s enemies (read: the United States and Israel) to carve out their own state from Turkish lands continues to hold sway.

Akcam’s other argument — that Erdogan is seeking to restore his international credibility by reaching out to the Armenians — certainly rings true. Indeed, many Turks echo the suspicions of the diaspora Armenians, saying that the statement is a cynical ploy aimed at winning Western favor and diverting attention from the corruption scandals engulfing Erdogan and his government.

Besides, if Erdogan were as humane as suggested in his condolence message, many ask why does he not extend the same compassion, say, to the families of the victims of the Gezi Park protests. And why are there no Armenians in the government or the parliament? As Turkey’s Foreign Minister Ahmet Davutoglu frequently points out, there were under the Ottomans. Why not today, then?

A crime against humanity was committed in 1915. It needs to be acknowledged, and amends need to be made. I fully agree with Akcam that a first and immediate step would be to revive a deal signed in 2009 that foresaw the establishment of formal ties and the reopening of Turkey’s sealed borders with Armenia. Turkey shelved it in 2010 under pressure (some would call it blackmail) from Azerbaijan. Many in the diaspora would argue that genocide recognition needs to come first and that Armenia should embrace that position, too.

They need not worry. Shortly after making his landmark statement Erdogan said Turkey's position on Armenia remained unchanged. In other words, until Armenia withdraws from parts of Azerbaijani territory that it captured during its war over Nagorno Karabakh, Turkey will not make peace with Yerevan.

What Turkey doesn't get is that until Armenian citizens feel secure in their relationship with Turkey they are not likely to make concessions on Karabakh.

When I lived in Yerevan I learned that some 60% of Armenia’s citizens are descendants of Ottoman Armenians who fled the bloodletting a century ago. This explains why, once I scraped away its Soviet crust, Armenia felt so much like home. And that as I uncover Turkey’s secrets, it feels, well, like Armenia.