Turkey’s Armenian issue will grow even more complicated with the anticipated demands from Yerevan and the Armenian diaspora for compensation and restitution of property. 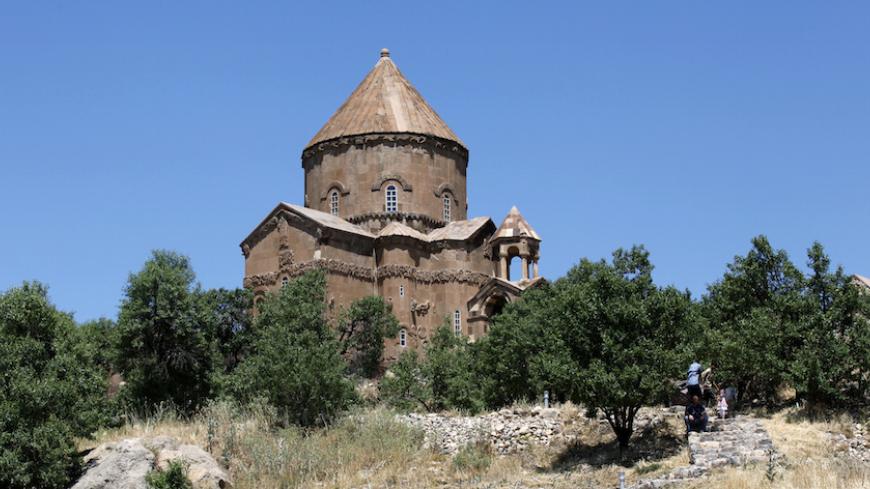 The Church of the Holy Cross, an Armenian church on Akdamar Island in Lake Van, is seen near the eastern Turkish city of Van, June 27, 2010.

Every year on April 24, the day commonly accepted as the beginning of the Armenian genocide, Ankara vehemently refuses to recognize the 1915 massacre and deportation of Ottoman Armenians living in Anatolia as genocide, and focuses on Washington and whether the US president will use the word "genocide" in his April 24 message. As this year was the centennial of the Armenian genocide, Ankara and the Armenian diaspora as well as Yerevan paid special attention to the matter. The general expectation was that even though it is the centennial, President Barack Obama would not want to damage bilateral ties with Turkey. This is in fact what happened, and Obama did not say the word.

From Ankara’s viewpoint, Obama's refraining from saying "genocide" meant that the campaign for international recognition was over without inflicting heavy damages to Turkey.

Meanwhile, Pope Francis did use the word in the mass observing the centennial at the Vatican’s San Pietro Basilica, and the European Parliament accepted by a vast majority a resolution defining the April 1915 events as genocide.

In Yerevan, where I spent the week with a group of journalists as guests of the Hrant Dink Foundation, Al-Monitor looked into what kind of an agenda now awaits Turkey on the Armenian issue. The foundation, set up in memory of the Armenian-origin journalist assassinated by a Turkish right-wing extremist, lists among its objectives developing a culture of dialogue, peace and empathy in relations between Turkey and Armenia.

The common point of the answers I received to my questions from key university, media and political figures in Yerevan was that the focus of the days to come will be the restitution of properties and compensation to the grandchildren of the victims and deported Armenians. Historian Vahram Ter-Matevosyan of the American University of Yerevan told Al-Monitor April 22, “Talk of restitution rather than condemnation is becoming a trend. This trend will grow after April 24, 2015.” Ter-Matevosyan said Armenians could go to Turkish courts to recover their properties. He explained that research by The American Worcester State University calculated that restitution and reparation claims could reach $43 billion.

Hayk Demoyan, the director of the Armenian Genocide Institute and Museum of Yerevan, confirmed in our April 2 meeting that claims for compensation and property restitution will be increasingly on the agenda in the coming days. He said priority is expected to be given to the return of church real estate. Demoyan said, “Many Armenians have land deeds, and these must be returned to their owners,” and asked for the opening of Ottoman property registries.

Back in Istanbul, it was no surprise to read an April 28 New York Times report that lawyers for the Armenian church had gone to Turkey’s supreme judicial venue, the Constitutional Court, about the return of the church property confiscated in Kozan, Adana province, in 1915. This was the first such litigation and probably a precursor of others to follow.

In addition to initiatives for compensation and restitution of properties, Yerevan will continue to pursue other means to re-establish diplomatic ties with Turkey. The protocols signed by the two countries in October 2009 had stipulated mutual steps to normalize bilateral relations. Unfortunately, these documents, although still legally valid, are politically dead and will continue to remain so for the foreseeable future.

The blame for this distressing situation lies with President Recep Tayyip Erdogan. Before the protocols were signed, when he was still prime minister in May 2009, he linked the normalization of Turkish-Armenian ties to the Nagorno-Karabakh issue. Today, the chances for a normalization initiative to succeed are weaker than in 2009. The political and psychological conditions are worse than they were pre-2009.

Why such a bleak outlook? There is no strong economic or political reason for Ankara to give up a solution to Nagorno-Karabakh as a precondition. Normalization of ties with Armenia will not enhance Turkey’s relations with the West, as was the case before 2009. The ruling Justice and Development Party (AKP) used the prospect of normalization to obtain the West’s support for its struggle to end the military tutelage in the country. Today, Turkey’s application process for EU membership seems to be in a coma and the AKP leadership has no intention of resuscitating it as Turkey continues to distance itself from the West. As Azerbaijan’s investments in Turkey grow, Baku’s influence over Ankara is becoming more tangible.

In Yerevan, journalists were told that the Armenians had lost their confidence in the AKP government for not implementing the protocols. This means that the Yerevan government will not have an easy time of persuading its public to support any normalization with the AKP’s Turkey.

If the protocols had been implemented, the dynamic that would have blossomed could have kept the Armenian diaspora out of Turkey-Armenia relations. But now the diaspora appears to have become more of a direct party to bilateral relations, and this further complicates the issue.