Can Erdogan overcome Azeri obstacle in ties with Armenia?

Turkey’s support for Azerbaijan in the dispute over Nagorno-Karabakh is blocking improved ties between Turkey and Armenia. 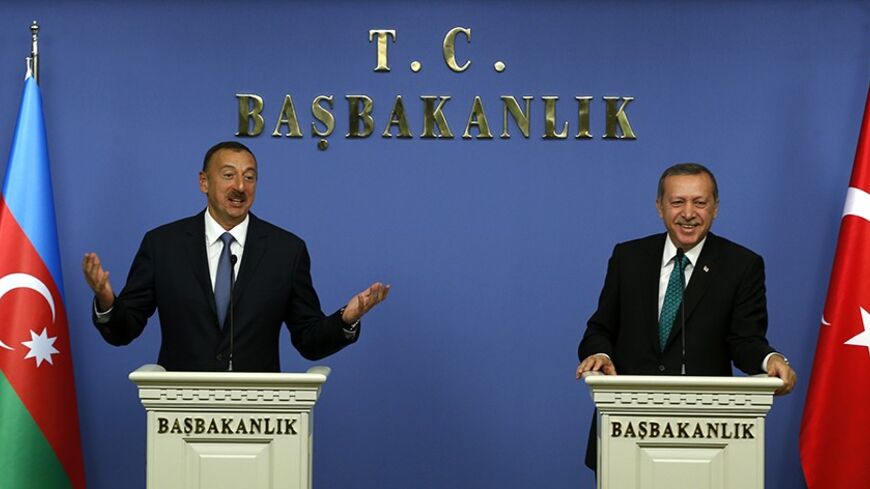 Turkish Prime Minister Recep Tayyip Erdogan’s groundbreaking message of condolence for Ottoman Armenians killed in 1915 — details of which are provided by Cengiz Candar in his April 24 post for Al-Monitor — was instantly castigated by hard-line Armenians as a shallow attempt by Ankara to "repackage its genocide denials."

The message was not welcomed by nationalist quarters in Turkey either. “Prime Minister Erdogan has long since been promoted to the position of being a window of hope for the genocide gang that is openly acting against Turkey and the Turkish nation,” said Devlet Bahceli, the leader of the Nationalist Action Party (MHP), in his angry reply to Erdogan.

Armenians maintain that 1.5 million of their brethren were murdered by Ottoman Turks in a genocide that began on April 24, 1915. Turks vehemently deny this, maintaining that millions of Muslims, including Turks, and not just rebellious Armenians, were killed in the slaughterhouse of Anatolia during World War I.

Washington, however, welcomed Erdogan’s “historic public acknowledgement of the suffering that Armenians experienced in 1915." The State Department expressed its belief that “this is a positive indication that there can be a full, frank and just acknowledgement of the facts, which we hope will advance the cause of reconciliation between Turks and Armenians.”

There is no shortage of analysts — Turkish, Armenian or otherwise — who contend that Erdogan’s statement is merely aimed at appeasing Washington in the lead-up to the centenary of what most Americans also believe to be a genocide perpetrated by Turks, and to prevent the US Congress from adopting anti-Turkish resolutions for the occasion.

The acrimonious debate between Turks and Armenians, which has often had a negative influence on Ankara’s ties with West, rages on between these two deeply estranged nations.

This topic has also prevented normal ties from being established between Turkey and neighboring Armenia, despite goodwill gestures by various citizens’ groups on both sides, including businessmen, academics, journalists, artists and writers.

Foreign Minister Ahmet Davutoglu said they had received very positive messages from Armenians after Erdogan's message. “The reactions from the Armenian diaspora are extraordinarily positive. We received very nice messages,” said Davutoglu, as reported by Hurriyet.

Not all Armenian diaspora organizations appeared to support Erdogan’s statement. Aram Hamparian, the executive director of the Armenian National Committee of America, said Erdogan was attempting "in vain, to escape responsibility for the Armenian Genocide, by somehow downgrading this still unpunished international crime to the level of a simple, unresolved bilateral conflict."

Ara Toranian, the head of France's Federation of Armenian Organizations, was milder in his response. The daily Hurriyet quoted him as saying that Erdogan’s remarks resulted in an “emotional shock,” and that he had doubts regarding Erdogan's sincerity.

Toranian said that while Erdogan’s remarks were important, they expected positive follow-up gestures. “For example, there is mention of dialogue with Armenia. The first gesture could be the opening of borders,” he said.

Embedded in Toranian’s remark is a basic complication facing Ankara in terms of normalizing ties with Yerevan. Even if Turkey and Armenia find the means to overcome the obstructionism of hard-line Turks and Armenians, Ankara must still contend with the seemingly insurmountable hurdle of Azerbaijan.

Press reports suggesting that Ankara is exploring ways to build on Erdogan's message and improve ties with Yerevan were bound to raise eyebrows in Baku. Azerbaijan considers Armenia a bitter enemy, having gone to war with it over the enclave of Nagorno-Karabakh after the two countries gained independence from Moscow in the early 1990s.

The predominantly Armenian enclave, known as Artsakh to Armenians, was lost in 1994 to Armenian forces. Armenia’s current president, Serzh Sargsyan, is from the enclave. A fragile cease-fire exists between Azerbaijan and Armenia.

Baku has sworn to regain Nagorno-Karabakh by military force if necessary. The peace talks, spearheaded by the so-called Minsk Group, formed under the auspices of the Organization for Security and Co-operation in Europe, have provided little progress.

Turkey was one of the first countries to recognize Armenia’s independence in December 1991, but diplomatic relations were never established because of the disputes over genocide and Nagorno-Karabakh, the latter of which is sensitive for Turks given their close ethnic ties to Azeris.

Although Turkey opened its border to Armenia shortly after Armenia gained independence, Turkey closed it again in 1993 because of the Armenian-Azeri dispute. It remains closed today. In May 2009, Erdogan personally vowed in Azerbaijan's parliament that the border would not be opened until the Nagorno-Karabakh dispute was resolved. Erdogan’s commitment followed the emergence of tensions between Ankara and Baku after the 2009 announcement that the two years of Swiss-mediated reconciliation talks between Turkey and Armenia had resulted in the drawing up of two protocols for normalizing ties.​

Baku went ballistic following the publication of reports that the Turkish-Armenian border would be opened as a part of this process. Baku sent parliamentary deputies to Ankara to mobilize Turkish nationalist sentiments to agitate the Erdogan government.

Keeping the border closed has become a strategic objective for Azerbaijan as it aims to keep Armenia landlocked and isolated. Erdogan could not risk alienating Turkish nationalists — those within his own Justice and Development Party (AKP) included — and traveled to Baku to provide the necessary assurances.

“When was the Turkish-Armenian border gate closed? It was closed when Nagorno-Karabakh came totally under Armenian occupation. Therefore, these gates will remain closed until this situation changes, or when we agree with our Azeri brothers on this. We will not take any steps until then,” Erdogan told Azeri deputies on May 14, 2009.

Erdogan’s remarks undermined the protocols initialed by Foreign Minister Davutoglu and his Armenian counterpart Edward Nalbandian in October 2009 in Zurich under the eyes of the US secretary of state and the foreign ministers of Russia, France and Switzerland. The protocols received a further blow when Yerevan sent them to the country's constitutional court before submitting them to be ratified by parliament. Ankara said the court’s ruling, even though it recommended a parliamentary endorsement of the protocols, "contained contradictory elements to the letter and the spirit of the protocols."

Armenia’s constitutional court said in effect that even if a commission of historians were to be established between the two countries to study the events of 1915, Armenia would not give up on its claim that those events represented genocide. Ankara subsequently held back from sending the protocols to parliament for ratification and Yerevan followed by withholding its ratification process. President Sargsyan said​ in an April 2010 television address that they were suspending the ratification process.

The stalemate between Turkey and Armenia continues as the centenary of 1915 approaches. Regardless of what his Turkish and Armenian detractors may say, Erdogan has taken a bold first step with his condolence statement.

It's unclear how this stalemate will be broken, even if bilateral problems between Ankara and Yerevan are resolved, because of Erdogan’s concrete commitment to Azerbaijan over Nagorno-Karabakh.

Given the hold Baku has over nationalist sentiment in Turkey, there is only so far Erdogan can go with Yerevan unless Armenia and Azerbaijan establish peace. This does not appear to be a likely prospect anytime soon.