Under the Justice and Development Party, Turkey has refused to face the Armenian question and is instead working to redirect the world's attention. 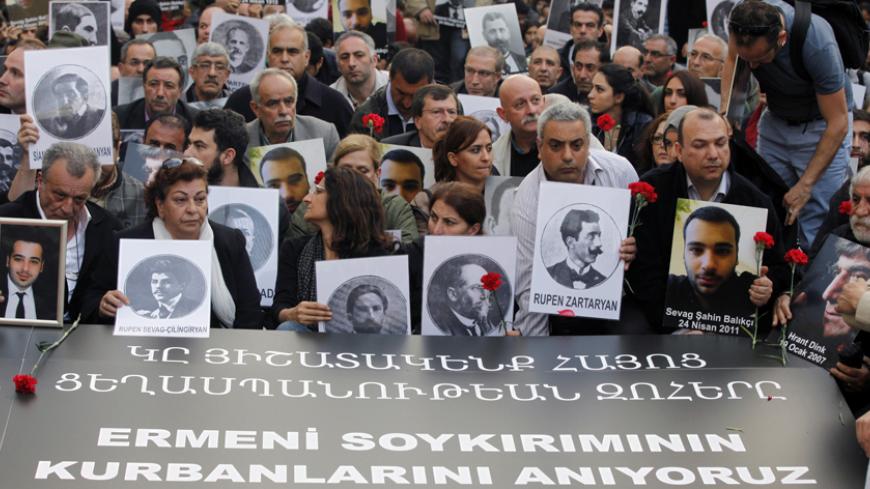 Activists hold pictures of Armenian victims during a demonstration to commemorate the 1915 mass killing of Armenians in the Ottoman Empire, in Istanbul, April 24, 2014. - REUTERS/ Osman Orsal

Before the Justice and Development Party (AKP) came to power, Turkey pretended it had no “Armenian problem.” Under the AKP, it finally acknowledged the issue, but keeps avoiding genuinely facing it.

Before the AKP, Turkey had an “Armenian taboo.” Under the AKP, it broke the taboo and let the genie out of the bottle, but then didn't know how to deal with it.

Turkey under the AKP had feigned a desire to normalize ties with Armenia. As part of this policy — branded the “Armenian opening” — a number of significant diplomatic steps were taken, but they, too, came to naught. The Turkish-Armenian border remains sealed and official bilateral relations are yet to be established.

Information from Ottoman and church sources indicate that some 1.5 million Armenians lived in what is today Turkey before 1915, making up 10% of the population. By 1923, when the Republic of Turkey was established, the Armenian population was gone, barring a tiny community in Istanbul. On the 100th anniversary of 1915, Turkey’s Armenians are estimated to number some 50,000 people.

A century later, Turkey’s Armenian issue is still about providing accurate and convincing answers to several basic questions and an overall international acceptance of their validity. What happened to the Armenians in 1915? Who did what and why?

The only universally accepted answer seems to be the year. With no consensus on any other questions, “the 1915 events” has become the most widely used term in Turkey to denote this episode in history. So, some “events” in 1915 led to the mass killings and deportations of Armenians.

On April 24, 1915, 250 Armenian intellectuals were arrested in Istanbul and deported to Cankiri and Ayas in central Anatolia. Representing the elite of Istanbul’s Armenian population, few survived the deportation. Armenia and the Armenian diaspora mark this episode as the beginning of the Armenian genocide, commemorating April 24 as a remembrance day.

April 24, 2015, marks the centenary of the events, and so Armenia and diasporic Armenians attribute a special importance to this year’s anniversary and plan to commemorate it more strongly than ever.

The AKP’s Turkey, for its part, is in a “twilight zone” — a state of ambiguity in which it recognizes its Armenian problem but fails to face up to it properly. The near perfect portrayal of this confused state lies in President Recep Tayyip Erdogan himself, whose attitudes represent a tangle of contradictions.

Two different Erdogans have emerged on the issue. The first went down in history on April 24 last year as the first Turkish prime minister to issue a condolence message to Armenians. The other Erdogan seems to view the Armenian ethnicity as offensive or shameful. In memorable comments on his ethnic roots in an Aug. 6, 2014, television interview, he said, “Some have said I’m Georgian. Others, excuse me, have said even uglier things — that I’m Armenian. But I'm Turkish.” This second Erdogan has not even felt the urge to correct his gaffe.

In his condolence message, the first Erdogan acknowledged, “April 24 carries a particular significance for our Armenian citizens and for all Armenians around the world.” He added, “We wish that the Armenians who lost their lives in the context of the early 20th century rest in peace, and we convey our condolences to their grandchildren.” To what Armenians view as genocide, the text referred as “the events of 1915” several times, and mentioned “relocation” once.

The phrase “events of 1915” in Erdogan’s message is one of the hallmarks of the “twilight zone.” We have here a political leader with a much softer rhetoric who avoids hard-line and denialist expressions such as the “so-called Armenian genocide” or “Armenian lies,” which the leaders of old Turkey employed. Yet, he can’t even bring himself to call the Armenian tragedy a “massacre.”

The fact that Erdogan spoke of “relocation” makes no difference, either. An attitude inclined to see the tragic loss of human life as the natural consequence of deportation offers no realistic prospect of settling the Armenian problem on any discussion platform.

Still, compared with its predecessors, the AKP government has been more tolerant of those who call the massacres “genocide” even though it doesn’t recognize them as such itself. A good illustration of this tolerance was Turkish-Armenian writer Etyen Mahcupyan’s appointment as chief adviser to Prime Minister Ahmet Davutoglu in October. Mahcupyan was given the post despite being well known for using the “genocide” label, and continuing to use it after his appointment. Similarly, since 2012, the government has allowed groups marking April 24 as the Armenian genocide remembrance day to gather in Taksim, in the heart of Istanbul, where police are normally quick to break up any dissident demonstration.

Yet, in a surprise development April 16, Mahcupyan was sent into retirement on age-limit grounds, a move that came shortly after Pope Francis and the European Parliament drew Turkey’s ire by calling the events a genocide. Despite the retirement explanation, Mahcupyan was widely believed to have lost his post for being too outspoken on this issue and that of corruption in government ranks.

So, on the centenary of 1915, a Turkey stuck in such a “twilight zone” can hardly be expected to do more than hope to weather the anniversary unscathed. All of Ankara’s diplomatic and political preparations for April 24 have been focused on this objective, including some sly tactics. In one intriguing move, for instance, the March 18 commemoration of the Ottoman victory in the Battle of Gallipoli was rescheduled to April 24.

The oddity of the timing stems from the sequence of events during the battle. March 18, 1915, was the day when the Allied fleet entered the Dardanelles Strait before being forced to retreat in a battle involving layers of mines the Ottomans deployed in the sea. Erdogan’s novel Gallipoli commemoration, meanwhile, comes on the eve of April 25, the day that marks the pre-dawn landing of British and French troops on the Gallipoli Peninsula, an event that could hardly be interpreted as any kind of victory.

On April 8, journalists accompanying Erdogan on a flight back from Tehran asked the president about Ankara’s strategy for the centenary. He gave the following answer: “God willing, this year we’ll issue our message from the Peace Summit in Istanbul on April 23. Then we’ll all go to [Gallipoli] the next day and pay our respects at the martyrs’ cemetery.”

A written message like last year’s will hardly suffice for the 100th anniversary. Erdogan is expected to go a step further by reading out the message himself.

Ankara has invited 102 heads of state to the ceremony, including Armenian President Serzh Sargsyan. Rejecting the invitation, Sargsyan slammed the timing of the Gallipoli commemoration, saying that Turkey was pursuing “a primitive goal of deflecting the international community’s attention from events that will mark the centenary of the Armenian genocide.” Let’s recall here that Sargsyan had invited Erdogan to the April 24 ceremonies in Yerevan long before Ankara extended its own invitation.

Erdogan’s tactics aim to force world leaders to make a choice between Turkey and Armenia, two countries incomparable in any aspect, based on realpolitik considerations. According to the logic of the game, a foreign leader invited to both ceremonies will tend to favor Turkey because of its bigger international weight and significance. And if a leader is unable to attend the Turkish ceremony, his or her attendance of the Armenian one will be even more unlikely.

In his condolence message last year, Erdogan said, “We, as the Turkish Republic, have called for the establishment of a joint historical commission to study the events of 1915 in a scholarly manner. This call remains valid.” That was not true, as the call had long become invalid.

The reconciliation protocols Turkey and Armenia signed in 2009 envisaged the creation of a joint history commission, along with the establishment of diplomatic relations and the mutual reopening of border crossings. According to the protocols, the commission was meant “to implement a dialogue on the historical dimension with the aim of restoring mutual confidence between the two nations, including an impartial scientific examination of the historical records and archives to define existing problems and formulate recommendations.”

Then-President Abdullah Gul was actively involved in the fence-mending process, but Erdogan — prime minister at the time — made sure the protocols were politically stillborn. In a May 13, 2009, speech in Baku, Azerbaijan, several weeks after the protocols were drafted, he declared the settlement of the Nagorno-Karabakh conflict between Azerbaijan and Armenia as a precondition for the normalization of Turkish-Armenian ties. The protocols were nevertheless signed on Oct. 10, 2009, but they never made it to the two countries’ parliaments for ratification, lingering in the deep-freeze before being officially proclaimed dead.

The reason Turkey remains in a “twilight zone” today is because the Erdogan government used the 2008-2009 reconciliation process with Armenia not as an opportunity to resolve the Armenian question but as a tool to enlist European and US support in its power struggle with the Kemalist military and judiciary. For the AKP government at the time, the objective of becoming the West’s favored partner in Turkey and having Western support on any issue was much more important than normalizing ties with Yerevan. And it pulled it off.

The Islamist AKP’s immunity to the nation-state ideology was good enough to break the Armenian taboo of the old Kemalist Turkey, but its political capacity fell short of getting Turkey to face its Armenian issue in earnest.

Normalizing ties with Armenia could indeed serve as a catalyst for Turkey to face up to history, but this requires a stronger driving force to propel action, and it lies in Turkey’s European Union membership process. But the chance of reviving the EU process under Erdogan’s leadership is close to zero, meaning that Turkey is bound to stay in the “twilight zone” for the foreseeable future.