Turkey wants to reconcile with the Armenians without taking any real step to appease them, marking the 99th anniversary of 1915 as that of the "Armenian atrocities" — signaling its denial policy is growing even tougher ahead of the centenary of the massacres. 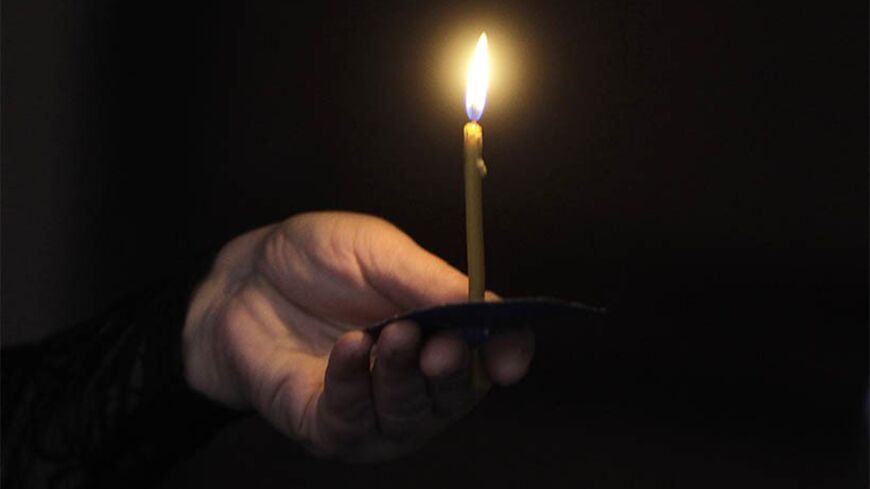 A woman holds a candle during a religious service marking the anniversary of mass killings of Armenians in 1915, April 24, 2012. - REUTERS/David Mdzinarishvili

On April 20, a solemn couple lit candles and prayed in a church in Derik, a town near Turkey’s ancient city of Mardin, that has come to symbolize religious peace. They were there all alone, for the Surp Kevork Armenian Church has neither a bishop nor any parishioners but them. Muslim neighbors, however, visited the Demircis — Yursalin, 58, and Naif, 66 — to convey their good wishes for Easter, and were treated with sweets and candy by their hosts.

On the same day, in the village of Gedikli in Igdir province, the Igdir Azerbaijan House Association and the Igdir Cyprus Peace Operation Veterans Association commemorated villagers killed by Armenians in 1919 at the spot where the mass grave of 96 people was dug up in 2003. Speaking at the ceremony, Igdir Gov. Davut Haner said, “We struggled a lot to survive as a state in these lands. We sacrificed a lot. The Turkish people, however, have not nourished hatred.” The head of the veterans association, Ismet Tagal, said, “Armenian gangs brutally killed our grandfathers and grandmothers and buried them here. The Gedikli people will never forget the atrocities of the Armenians.”

The three simultaneous events above illustrate Turkey’s “Armenian syndrome,” which recurs on each anniversary of April 24, 1915. The Armenian couple in the first story represents the legacy of a historical tragedy and a numerical proof of what happened. The empathy accorded to the couple shows that facing up to history is possible in places of cohabitation. The second story reflects the popular sentiment that matches the state’s narrative of the “Armenian atrocities.” It's symbolic of the large social base in which the official policy of denial of the events of 1915 is readily embraced. The third story is quite new for Turkey. It represents the urge to face its own history, a trend that currently lacks popular support.

It took ages for a small group of Turkish intellectuals and politicians to utter the words “Armenian genocide” in a country where the 1915 chapter of history books was headed the “Armenians’ atrocities.” A newly published book — "1965: 50 years before 2015, 50 years after 1915" by Aris Nalci and Serdar Korucu — provides a striking account of Turkey’s attitude on the “genocide” throughout the years.

According to the book, the first serious international accusation of genocide against Turkey came on the 50th anniversary of the 1915 events. A rally held in Beirut remained the focus of media attention for weeks. To counter the global Armenian campaign, the Turkish press carried articles about the “Armenians’ atrocities” and the loyalty of remaining Armenians, arguing that those people were considered “Christian Turks,” that the commemoration events were the work of a small Armenian group incited by Greek Cypriots seeking to revive the Sevres Treaty, that Turkish Armenians were equally supportive of the Cyprus cause and that the Armenians of the diaspora did not actually hate the Turks.

In the meantime, shipments of an issue of Le Monde that featured a story about the “genocide” were confiscated before they could enter Turkey.

The first trauma of 1965 is now decades past. Yet, the narrative of deportations necessitated by the “Armenians’ atrocities” came to use the word “massacre” only in conjunction with "so-called." Today the use of the word “genocide” remains equivalent to treason in social and political terms. Hence, organizing a commemoration at Taksim Square means taking risk.

The Justice and Development Party (AKP) government’s drive to normalize ties with Armenia had raised hope that certain fears could be laid to rest. But soon it became clear that what Ankara meant by facing its history had nothing to do with recognizing the genocide, as the Armenians expected. Rather, the Turkish government envisages a reconciliation process in which the Turkish thesis is also given a voice, and then the story is left to history without any chance for accountability.

Hence, with one year to go to the centenary of 1915, Ankara sticks to sustaining the denial policy. That is, Ankara pursues the goal of rapprochement with Armenians on the one hand, while waging a propaganda war with its counter thesis on the other. This approach meshes with the AKP government’s recent policy to backpedal from the goal of peaceful resolutions to chronic problems besieging Turkey and turn inward to cater to its conservative-nationalist roots. Yet, it stands no chance of success.

The government dropped hints of its intentions back in November, during a parliamentary debate on the 2014 budget of the Turkish Historical Society (TTK). A budget of 8.2 million lira ($3.8 million) was allocated to the TTK, which planned to hold 14 meetings to refute the genocide claims. One of those gatherings is now scheduled for April 24-25 in Van, not far from the Armenian border. The event is being promoted as a “scientific” symposium by TTK Chairman Metin Hulagu, who argues that the deportations of Armenians became necessary after they torched Van and started a revolt.

“There was no Armenian genocide, for our culture would not sanction anything like that,” Hulagu told Al-Monitor, adding that a series of panels titled “Historians Discuss 1915” will be held this year in Sakarya, Kayseri, Erzurum, Ankara and Karabuk.

In the meantime, the Foreign Ministry draws attention to itself with moves that seem to signal tough diplomatic lobbying, including Hakki Akil’s appointment as Turkish ambassador to France, which is home to a large Armenian diaspora. Akil is known for being on especially good terms with the Armenian community in Marseille.

In a recent interview with Hurriyet, Akil revealed his great-grandfather’s second wife was Armenian, while arguing that the genocide issue was up to international courts rather than parliament, and calling for an end to policies of hate speech that fuel enmity between Turks and Armenians.

“It breaks my heart to see hate speech antagonize two peoples that have lived side by side and still listen to the same music, eat the same food, laugh at the same jokes and resemble each other so much,” he said. “I grew up in Anatolia. I saw how close Turks and Armenians are.”

But while posting a sensible diplomat to Paris, the Turkish Foreign Ministry left the ambassador’s office in Washington vacant, just when a genocide resolution came up on Congress' agenda. The new ambassador, Serdar Kilic, hit the road to Washington in haste only after the Senate Foreign Relations Committee passed the resolution April 3. The tenure of the former envoy, Namik Tan, ended March 31.

“Our ambassador there was asked to leave in April. What kind of a foreign minister we have? To make such a move in the most critical month of the year is either ill intention or poor planning,” said Faruk Logoglu, deputy chairman of the main opposition Republican People’s Party and a former ambassador to Washington.

The Foreign Ministry said the delay in dispatching Kilic to Washington resulted from purely logistical reasons. Yet, one should remember that Tan was recalled to Turkey in March 2010 in protest of a vote at the House Foreign Relations Committee that approved a genocide resolution.

Judging by the countermeasures the government is drawing up over 1915, it seems that Turkey facing up to its past is still far away.