How I faced the Armenian genocide

A Turkish writer tells how he faced up to the mass killings of Armenians at the hands of Turks and how learning the truth scarred his inner world. 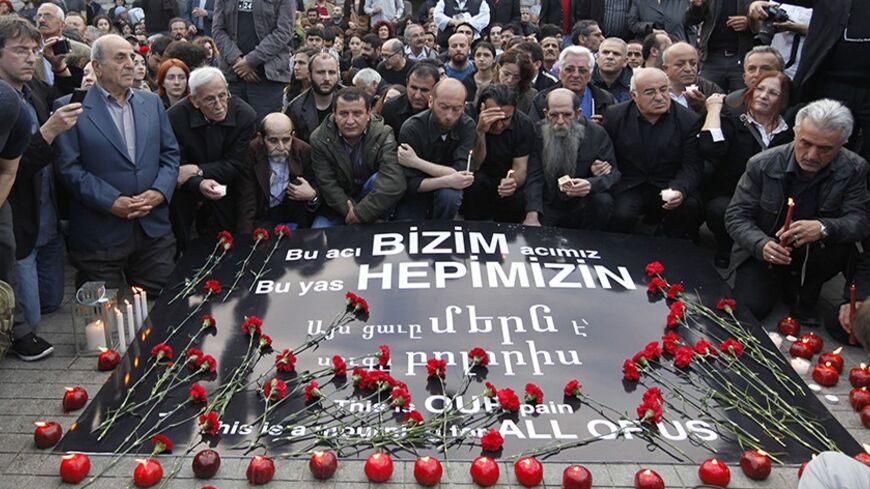 Another April 24 is coming around. A landmark in Middle Eastern history, the date this year will mark the 99th anniversary of the catastrophe of 1915. Ninety-nine years ago, one of the region’s Christian peoples, the Armenians, fell victim to a great tragedy they call Metz Yeghern, or genocide. A deep, insurmountable enmity has haunted Turks and Armenians ever since, with tensions bound to reach a crescendo next year, the centenary of the genocide. This year, like those that went before, the spokespeople of various countries will repeat their cliches. The annoying nonsense will go on.

Today, I tell of my own mental journey and the transformation of conscience I experienced on this issue as a Turk. I speak of how I faced up to the massacres of Armenians and Christians and how the truth scarred my inner being. The road to acceptance was definitely hard, but I eventually came to terms with the truth. The Armenians were uprooted from the lands where I lived. Hundreds of thousands of them were slain brutally on the orders of Talaat Pasha’s Young Turk government. In the ensuing Kemalist era, Turkey’s Christians and Jews were again expelled from their homeland. It was an unmistakable act of ethnic cleansing, which the state I belonged to denied. Such denial, on top of everything else, is shameful.

I was in high school when I first became curious about the events of 1915. Our Kemalist teachers spoke of “Armenian allegations” and “Armenian lies.” The Kemalist education we had received in earlier grades had already instilled in me and my classmates an anti-Armenian sentiment. Then, we were shown a government-sponsored documentary according to which Turks, in fact, were the victims of genocide at the hands of the Armenians.

The documentary was a ridiculous production, devoid of quality and intellectual insight. I wasn't convinced. On the other hand, being the child of a Turkish family, I did not want to believe that “we” slaughtered the Armenians. Turkey’s current official position — It was not a massacre, but mutual killings — was in its fledgling stages in the 1990s. To allay my own conscience, I endorsed this thesis as the most credible one.

I began to read studies that supported the government's version of the events. Whenever the issue popped up, I insisted that there had been no massacre, only mutual killing. During my university years, I continued to read up on the issue, as it occasionally became a topic of discussion and whetted my appetite to read more. Frankly, however, I didn't bother to read material from both sides, try to be objective or fully seek the truth. To me, the truth was already in my mind: An Armenian genocide never took place. The two peoples slaughtered each other. Thus, my only purpose in reading was to reinforce the “truth” I had already come to accept.

As the late Armenian luminary Hrant Dink used to point out, as a Turk I was simply incapable of coming to terms with anything like genocide. I could not bring myself to say, “Yes, we Turks slaughtered the Armenians.” Dink argued that the urge toward denial was in fact a natural human reaction. While on other political issues my thinking matured into libertarian and democratic outlooks, on the Armenian question I remained conditioned to insist that “It was mutual,” that “Apologies should be extended on both sides,” that “It was a time of war and there was no massacre, but mutual killings.”

Although I never read a study affirming the genocide, I gradually began to sense that something was wrong with the pro-Turkish arguments. The Turkish literature on the subject varied from “Nothing happened” to “The killings were mutual” and ultimately to “Yes, it did happen, but it was necessary.” At this point, I had a change of heart. As a Turk, I might have felt the urge to delude myself, but to endorse an argument that was more or less saying, “Yes, we did it, and we were right to do so” seemed to me cruel and simply immoral.

The American scholar Justin McCarthy, whose work I read extensively at the time, was a leading foreign supporter of the Turkish version. He had the strong backing of the Turkish state and often visited Turkey at Ankara’s invitation to make speeches here and there.

McCarthy did not deny the huge number of atrocities that resulted from deportations, but concluded that if the deportations had not taken place, the Turks would have lost eastern Anatolia. Therefore, their actions were justified. This argument offered easy vindication for Turks, most of whom might have been relieved to think it was the right thing to do, after all.

As Dink also said, denying what happened or not believing in it was, in a sense, a noble reaction. Most Turks probably harbor this sentiment today. Yet, a large number of people tend to embrace the theory that the Turks were in the right. This is terrible and truly shameful, because it points to a cruel and immoral mindset that legitimizes murder and mass killings.

In my case, even the pro-Turkish writings I read to delude myself and relieve my conscience led me to eventually conclude that what happened was a crime against humanity. Yet, at the same time, I came to realize that labeling an entire nation as the butcher of another is no less intellectual nonsense than the perspective of seeing an enemy in each and every member of another nation. This holds true not only in the Turkish-Armenian context, but also in the German-Jewish and Serbian-Bosnian cases.

The real murderer is the mindset, not a nation, that justifies the extermination of ethnic or religious groups from an allegedly lofty purpose. It is such a revolting, results-oriented mindset that has made possible all massacres and genocides, deeming all means legitimate in achieving a purported sacred end. In regard to the events of 1915, this morality- and conscience-deprived mindset emerged in the avatar of the Young Turks ideology, embodied in Talaat, a man who saw people as mere objects in his population-engineering designs.

So, that’s my personal story. I no longer deceive myself. What happened in these lands in 1915 was a great tragedy, a genocide against Armenians, a crime against humanity. Every “but …” argument about this crime makes me nauseous.