Will Turks, Armenians ever reconcile?

The visit of Turkish Foreign Minister Ahmet Davutoglu to Yerevan could be a positive first step in Turkish-Armenian reconciliation. 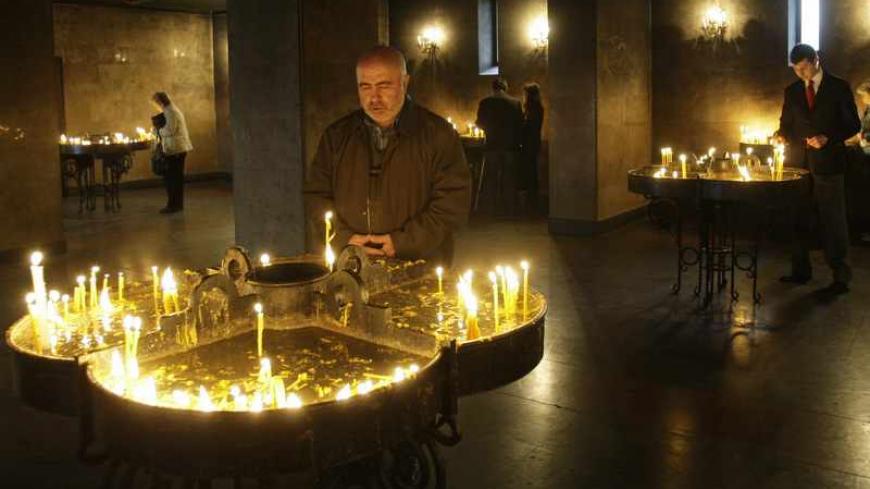 People light candles during a religious service to mark the anniversary of mass killings of Armenians in 1915, in Yerevan, Apr. 23, 2010. - REUTERS/David Mdzinarishvili

When Turkish Foreign Minister Ahmet Davutoglu visited Yerevan on Dec. 12, in the first high-level visit from Turkey to Armenia in five years, he was greeted not only by his Armenian counterpart, Eduard Nalbandyan, but also by political activists. The latter’s welcome, however, was not a warm one. A group of protesters gathered in front of Davutoglu’s hotel to protest Turkey’s “denial of the Armenian genocide.” They wanted “recognition, condemnation and reparations,” and opposed the Turkish foreign minister for not taking those steps.

Perhaps this was a bit unfair to Davutoglu, though, who said on this trip something that no other Turkish statesman has openly said before: that the “deportation” of Armenians from Anatolia in 1915 was “inhumane.” (In Turkey, “deportation” is the official and the common term for what others call “Armenian genocide.”) No wonder Turkey’s nationalists criticized Davutoglu for taking such an “unpatriotic” step. Writing in Yeni Çağ, a hardcore nationalist daily, columnist Ahmet Atakan argued that Davutoglu acted “as if he is not as the Turkish foreign minister, but a negotiator between the two sides [Turks and Armenians].” More important, the deputy chair of the main opposition CHP (People’s Republican Party), Faruk Logoglu, criticized Davutoglu on Twitter and wrote (with my translation from Turkish):

“FM Davutoglu said to the Armenian FM, ‘The deportation of 1915 was inhumane.’ What was inhumane? What would he rather have been done?”

Logoglu’s reaction is significant because it represents the mainstream view in Turkey about the tragic fate of Ottoman Armenians. Most people here simply believe that it was a defensible act to protect the Turkish homeland.

Here is why. A considerable portion of the people who call themselves Turks today are in fact rooted not in modern-day Turkey, but in two neighboring regions: the Balkans and the Caucasus. During the century-long shrinking of the Ottoman Empire, millions of Muslims in these two regions faced persecution and had to flee to Turkey proper. My own great-grandfather, for example, was a Circassian (Çerkes) who first resisted the Russian occupation of the Northwest Caucasus around the 1860s and then had to migrate to Yozgat, Anatolia, during the ethnic cleansing of Circassians. It is estimated that, during that long process of Russian onslaught in the Caucasus, some 1.5 million Circassian men, women and children were killed, and more than 1 million others were expelled to Turkey. Hence comes the saying, "If you scratch a Turk, you find a Circassian persecuted by Russians underneath.”

A similar story took place in the Balkans as well. As the Ottoman Empire shrank and new nation-states emerged in former Ottoman territories — such as Serbia, Greece or Bulgaria — Turks and other Muslims in these countries faced various waves of persecution and mass murder, resulting in millions of refugees. That is why there are millions of Balkan immigrants in modern-day Turkey — people whose origin is Bosniak, Albanian, Pomak or Balkan Turk. In his book, Death and Exile: The Ethnic Cleansing of Ottoman Muslims, 1821-1922, American historian Justin McCarthy calculates that some 5 million Ottoman Muslims perished in a century due to ethnic cleansing by their enemies, most of whom were either Russians or the Eastern Orthodox allies of the Russians.

This is the background that most Turks have in mind when they think of what happened to Ottoman Armenians. Of course, Armenians, who lived in Anatolia side by side with Turks for centuries, were not responsible for the tragic fate of the Muslims in the Balkans or the Caucasus. But in the early 20th century, Armenian nationalists in alliance with imperialist Russia aimed at carving out an independent Armenia from the collapsing Ottoman Empire. Had they succeeded, they could have initiated an ethnic cleansing against the Muslims similar to what happened in the Balkans and the Caucasus. This was the logic of the Ottoman Young Turk wartime government which, in the spring of 1915, made the tragic decision to deport all Armenians from Anatolia to Syria in response to the Armenian Uprising that began earlier that year. In was, in the minds of the Young Turks, a pre-emptive ethnic cleansing.

To be sure, none of this justifies the death of even one of the approximately 1 million Armenians who perished in that fateful year of 1915. This was, as Davutoglu put it, an “inhumane” act. And it remains a stain on Turkish history that I, as a fellow Turk, believe that we Turks should apologize for. However, it did not take place in a vacuum. Nor it did come out of a hateful ideology like that of the Nazis against the Jews. It rather came out of a horrible historical context which pitted the peoples of a crumbling empire against each other and in which Turks suffered at least as much pain as they caused.

Therefore, reconciliation between Turks and Armenians will be possible only when this painful episode in history is understood in a way which takes the perspectives of both sides into account. Armenians, most naturally, recall only the suffering of their grandfathers and demand respect for it. Turks, on the other hand, recall the sufferings of their own grandfathers and question why the ethnic cleansing of the Armenians is singled out among many other tragedies in which they were the victims. Both sides need to understand the perspectives, and the feelings, of the other side. Both sides, in other words, need to know each other.