No Incentive for Turkey, Armenia To Normalize Relations

The Armenian genocide issue will not play a role in the normalizing of Armenia-Turkey relations, Cengiz Candar writes. 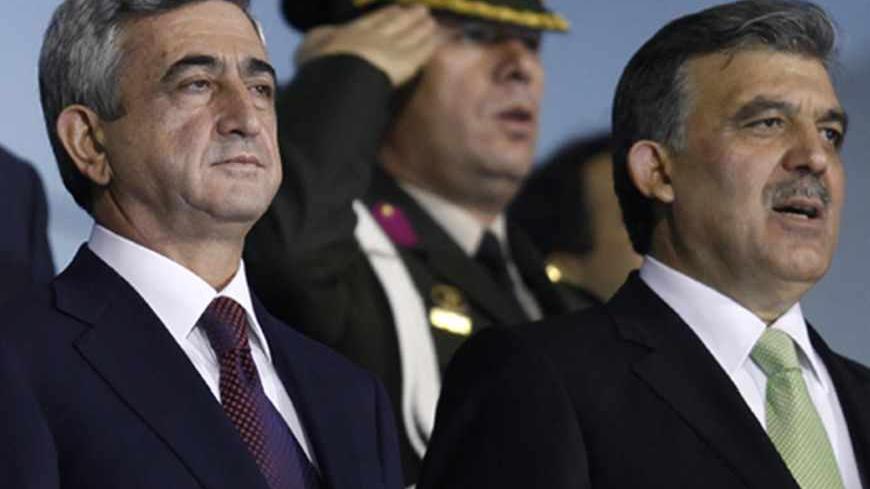 Hopes that Turkey could ever solve its almost intractable Kurdish issue have never been as high as they were in the first quarter of 2013. If this peace process can continue with all its ups and downs but without rupture, it could that suggest that another perennial issue as old as the Kurdish issue, the Armenian question, can also be tackled.

Of course, there is a fundamental difference. The Kurdish issue directly concerns 15 million people living in Turkey as Turkish citizens and more than 30 million other Kurds living in the region and majority populations of tens of millions living in those countries. The Armenian question is about the perishing of a national community on the land they have been living for time immemorial. Today, the question is more about its deep psychological scars rather than its physical aspects.

For the Armenians, a large part of historical Armenia, what  they call Western Armenia, covers an substantial portion of today’s eastern Turkey. It is not unusual for countries and lands to change names but for the Armenians and Turkey, the issue is more than losing land but the almost total annihilation of a nation on the land where they used to live.

We are talking about the events of 1915, which the Armenians first labeled “”Metz Yeghern," that is, “Great Disaster,” until the UN adopted the 1948 Convention on Genocide. Turkish historiography called it “tehcir," that is, “relocation or deportation."

"Tehcir” is defined as “relocation dictated by war conditions” and sounds even more innocent than the English word “deportation.” To avoid remembering it as a black page of history, a normal Turkish citizen wasn’t even told about the “deportation of the Armenians." When the Armenians came out with 1915 genocide accusations, Turkey tried to protect its national pride by using “deportation” instead of "genocide."

The word genocide entered Turkey’s political lexicon when in the 1970s through the 1980s, an Armenian terror organization called ASALA began hunting down and assassinating Turkish diplomats in all corners of the world.  That is why the word had unpleasant connotations from the outset and to recognize 1915 as genocide was perceived as submitting to terrorism.

The more Turkey democratized, globalized and opened up to outside world, the more these perceptions began to change. Of course, the end of the Cold War had a major effect. All of sudden, instead of the Soviet Union, Turkey found Georgia, its ethnic relative, oil- and gas-rich Azerbaijan and Armenia as its neighbors in southern Caucasia.

While for many years the Armenian issue based on the claims of genocide was shouldered by Armenian Diaspora in many corners of the world, but notably in the US, France, Lebanon and Argentine. Suddenly a state representing the Armenian identity emerged next door to Turkey.

For the last half century, in Turkey the word diaspora, even without its Armenian modifier, meant "Armenians who claim genocide with anti-Turkish sentiments." The country of Armenia came to represent the political dimensions of the issue.

In the meanwhile, we have to remember that the assassination in 2007 of Turkey’s most influential and best known democratic figure, Armenian journalist Hrant Dink, constituted a breaking point in Turkey’s Armenian issue that heralded the emergence on the political stage of the “Turkish Armenian” identity, even though they are but a 60,000-strong minority living only in Istanbul, down from 1.5 million in 1915.

Since that time, an increasing number of Turks and Kurds of Turkey, in solidarity with Armenians, began to discuss the Armenian issue and to observe April 24 as Genocide Remembrance Day, first in the center of Istanbul and then, this year, in many provincial capitals, led by Diyarbakir.

Turkey faces a complex structure of Armenia-Diaspora-Turkey’s Armenians. For the late Hrant Dink, normalization of relations between Turkey and Armenia was a life mission. A year and half after his assassination we came very close to his ideals.

When the qualifying rounds of the 2010 World Football Cup put Turkey and Armenia in the same group, a possibility of “football diplomacy” reminiscent of the “’ping-pong diplomacy of the USA and China appeared. The [resident of Turkey, Abdullah Gul, went to Yerevan to watch the Armenian-Turkey game on Sept. 6, 2008. After the game, the foundations of warm relations were laid in a reception given by Armenian President Serge Sarkissian in the stadium grounds before Gul left for the airport to return to Turkey. A year later, Sarkissian was the guest of Abdullah Gul at the return Turkey-Armenia match in Bursa. Thousands of Turks descended on Armenian capital, Yerevan, benefiting from the improvement in the atmosphere between the two countries.

The warm climate between the two countries led to signing of the Turkey- Armenian Protocols by two foreign ministers, Ahmet Davutoglu and Edward Nalbandian, on Oct. 11, 2009, in Zurich in the presence of US Secretary of State Hillary Clinton, Russian Foreign Minister Sergei Lavrov and EU foreign affairs and security official Javier Solana.

To normalize and develop relations, the parties undertook to refrain from mentioning two preconditions:

There was opposition to normalization of Turkey-Armenian relations both in and out of both countries. Azerbaijan felt that Turkey had eliminated its bargaining cards against Armenia. Although the US appeared to be satisfied with the development, it was nevertheless asking Turkey and Armenia what would the Russian gains be from Turkey-Armenian rapprochement.

Before long, the preconditions reappeared and eventually became the prerequisites of normalization. Prime Minister Recep Tayyip Erdogan in a speech at the Azerbaijan parliament in Baku to alleviate the concerns of  Azeris declared that there won’t be Turkey-Armenia normalization if there is no progress at Karabakh.

Observers saw Erdogan’s upending with a single blow of what Gul was trying to build as the Prime Ministers preference for the option of Turkey becoming an energy hub given the oil and natural gas wealth of Azerbaijan instead of normalizing with Armenia and pleasing the US and the West.

Those in Turkey opposing warming up  to Armenia, came up with the observation that Armenia under strong Russia influence had no intention of taking any steps neither in genocide or Karabakh questions anytime in near future and used that argument to prove that Turkey was not to blame for the in normalization.

Turkish officials saw that the Minsk Group set up within Organization for Security and Cooperation in Europe [OSCE] had not moved at all.  In the group that included USA, Russia and France Turkish officials found out that the US did not have much leverage over Karabakh and the real leverage was in Russian hands. They also noted Russia had no incentive to find a quick solution to Karabakh and to empower Turkey in the Caucasia.

If Turkey cannot get Russia to move on Armenia question even when Erdogan-Putin relations are at their best, it is not likely to get anything more at a time when they are in opposing camps over Syria.

In Turkey  there will be two elections in 2013, for one the president and the other for local administrations and general elections in 2014. No Turkish politician in the right mind can be expected to take any steps of rapprochement with Armenia at the cost of upsetting Azerbaijan and mobilizing the Azeri lobby in Turkey and Turkish nationalists.

Because of all these considerations, while many other issues are being tackled, you don’t see any haste, any action to put normalization with Armenia to the top of the agenda.

But 2015 will be the 100th anniversary of the genocide, and Armenian mobilization in the international arena in 2015 will be a potential irritant for Turkey. But, then,  Turkey’s own domestic developments and bringing in the Diaspora to share April 24 observances, also means that genocide will no longer be something Turkey owes to Armenia.

In other words, the need for closure of the Genocide File is no longer an incentive or sine qua non for normalization of Turkey-Armenia relations.

No Turkey-Armenian normalization is detected in the horizon. And there won’t be unless there are mutually enticing and strong incentives.