Turkey has warned the United States that President Joe Biden's expected characterization of the mass killings of the Ottoman Armenians in 1915 as a genocide will derail Turkish-Armenian reconciliation and further damage US-Turkish ties. Armenians say there is no reconciliation process to speak of. 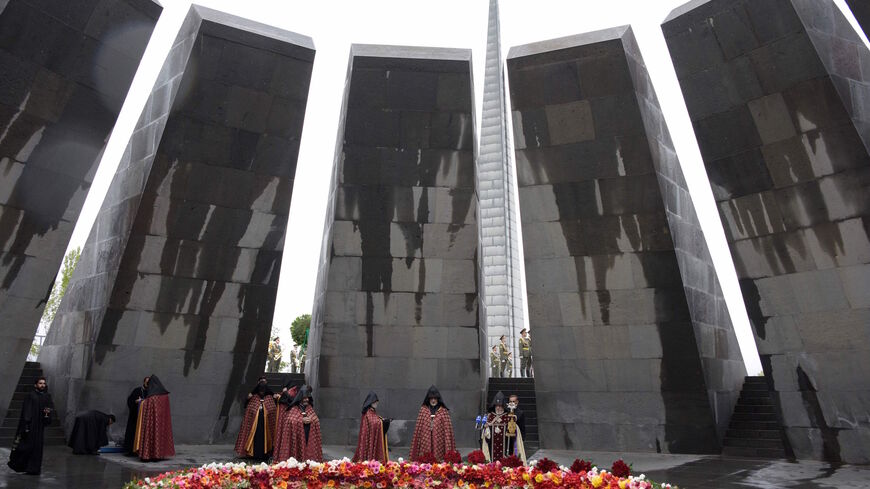 Catholicos Garegin II, the head of the Armenian Apostolic Church, attends a ceremony commemorating the 105th anniversary of the massacre of more than 1 million of Armenians by Ottoman forces in 1915, at the Tsitsernakaberd memorial in Yerevan on April 24, 2020. - KAREN MINASYAN/AFP via Getty Images

Their love blossomed in the heady days when reconciliation between Turks and Armenians seemed within reach. Ihsan Karayazi, a Turk, first set eyes on Armine Avetisyan, an Armenian, in the eastern Turkish city of Kars in April 2006 — in a police station. She had been spotted photographing a military building, not knowing that she would land herself in trouble. Naif Alibeyoglu, then the mayor of Kars, swiftly intervened. His dreams of transforming the far-flung outpost on the Armenian border, eulogized in Orhan Pamuk’s mesmerizing novel "Snow," into a regional hub of economic and cultural activity in the Caucasus was not to be jeopardized. Alibeyoglu dispatched Karayazi, who was his aide at the time, to disentangle Avetisyan from the clutches of the police. Karayazi, 38, and Avetisyan, 40, are happily married.

What if the same events had played out today? Avetisyan might be in jail, Alibeyoglu potentially fired over his overtures to Armenians, and “there would be absolutely no question of our getting married,” said Karayazi, who now lives in Boston, where he works as a cultural entrepreneur and Avetisyan as a project manager at Brandeis University. “I could never go to Armenia and feel as welcome as I did then, and nor would Armine and I be able to settle in Turkey. The paradigm has shifted, our hearts are broken,” he told Al-Monitor.

On April 24, Joe Biden is widely expected to become the first US president to formally describe the mass extermination of more than a million Ottoman Armenians in 1915 as a genocide. April 24 will mark the 106th anniversary of the bloodletting that all but wiped out Turkey’s ethnic Armenian population. For decades, survivors and their descendants have been pushing for governments and parliaments across the world to acknowledge the genocide, as most credible historians do, in the face of a massive propaganda campaign launched by Turkey arguing that the Armenians died as a result of famine and disease in the midst of war.

Biden was expected to inform Turkish President Recep Tayyip Erdogan of his decision in his first phone call as president to the Turkish leader which took place shortly before publication of this article.

Turkish Foreign Minister Mevlut Cavusoglu warned that any such move would deal a further blow to Washington’s troubled ties with its NATO ally. Undoubtedly it will. Turkish officials also say Biden’s acknowledgement of the genocide would “derail reconciliation efforts” between Turkey and Armenia.

To many Armenians still reeling from the humiliating defeat inflicted in November by Azerbaijan thanks to Turkish drones and military advisers and Syrian mercenaries in the contested Nagorno-Karabakh enclave, this claim sounds obscene. “What reconciliation?” scoffed Alin Ozinian, a Yerevan-based Armenian researcher who has roots in Istanbul. “The prevailing sentiment among Armenians is that '100 years ago they [Turkey] wanted to exterminate our race and make us vanish from the face of the earth,' and that 'today they want to do the same thing, kill us all’; that is what most Armenians, be they uneducated or educated, here think,” Ozinian told Al-Monitor. As such, there would be a fierce public backlash if any Armenian government were to reciprocate any Turkish moves to reopen its border with Armenia. The border was unilaterally sealed by Ankara in 1993 in support of Baku in a previous and protracted bout of fighting between Armenia and Azerbaijan over Nagorno-Karabakh. Turkish officials have been hinting they may reopen the border now that Nagorno Karabakh is back in Azerbaijani hands.

The 44-day long conflict left 3,360 Armenian and 2,855 Azerbaijani troops dead, according to official figures, which are considered to be low. Hundreds of Syrian fighters and dozens of civilians also were killed.

“That’s a very high number for a country as small as Armenia,” Ozinian said of the death toll for the country of nearly 3 million. “Every family has been affected in some way, be it through the deaths of friends or relatives, or those who are either wounded or missing,” she added. Against this backdrop, Biden’s acknowledgment of the genocide would inject a tremendous moral boost for Armenians across the globe.

Salpi Ghazarian, director of the University of Southern California’s Institute of Armenian Studies and a former foreign policy adviser to the Armenian government who is descended from survivors of the genocide, said, “The Biden promise is in some ways reassuring that perhaps US foreign policy can in fact be complex and nuanced and simultaneously espouse and support human rights and values and all of the things that the US says it believes in while at the same time pursuing its bilateral agenda with Turkey but with one not falling victim to the other.”

She said, “The statement is of symbolic importance. It is important for the memory of my grandmother who lived her whole life suffering for what she was exposed to as a 5-year old. Not only is it important for her memory and for my kids, it’s important for all of us as Americans.”

As recently as six years ago, Armenians from the diaspora and from within Turkey gathered in Istanbul and farther east in Diyarbakir, where Armenian communities thrived before 1915, to mark the centenary of the genocide. Turkish talk of reconciliation then rang true.

The commemorative events, which unfolded peacefully, were the culmination of more than a decade of reforms launched by Erdogan’s Justice and Development Party (AKP). The aim was to end military tutelage and win membership in the European Union. That same year, Karayazi and Avetisyan tied the knot. “Our wedding invitations were printed in Turkish and Armenian. I am from Kadirli, a very nationalist town [in the southern province of Adana]. Nobody batted an eyelid,” Karayazi recalled. 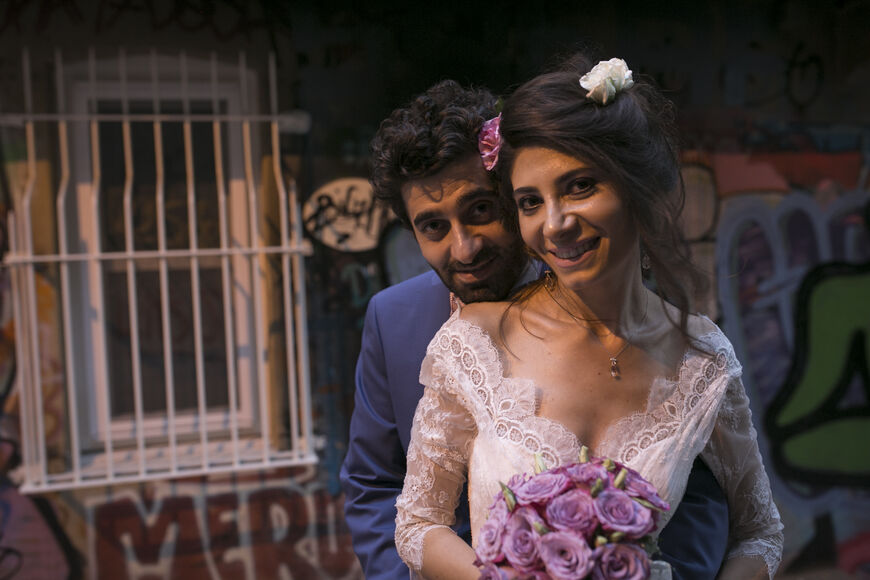 In the preceding years, several momentous developments had occurred. In 2005, in the face of a fierce nationalist backlash, Turkish and Armenian scholars gathered for the first time to openly debate the once taboo subject of 1915 at a university in Istanbul. Previously banned works on the genocide appeared in bookstores. “Hidden Armenians” — the grandchildren of Armenians who had converted to Islam in order to avoid being murdered — began to emerge from the shadows. In September 2008, then-President Abdullah Gul became the first Turkish head of state to travel to Armenia to watch a World Cup qualifier soccer match between the two countries’ national teams alongside his Armenian counterpart, Serge Sargsyan. Swiss-brokered talks to establish diplomatic relations between Turkey and Armenia resulted in the signing of a set of protocols in April 2009, in which the sides unconditionally pledged to establish diplomatic relations and reopen their sealed borders.

Nationalist hackles began to rise, Azerbaijan cried foul and Erdogan shelved the deal. Another early sign of the depth of the nationalist backlash bloodily burst into the open when, on Jan. 19, 2007, Turkish Armenian intellectual Hrant Dink was shot dead in Istanbul outside the office of Agos, the Armenian Turkish weekly newspaper he founded and edited. Dink had been at the vanguard of a movement to force Turkey to acknowledge the crimes of the past, and for Turks and Armenians to reconcile.

Dink had the backing of a prominent Turkish businessman and philanthropist Osman Kavala. Nicknamed the “Red Billionaire” for his left-leaning views, Kavala helped organize and finance numerous projects bringing together Armenian and Turkish journalists, artists, historians and youths through his civil society organization Anadolu Kultur.

In Kars, Kavala lent support to the annual Golden Goose film festival and the Caucasian Culture festival, launched a year earlier in 2004, when Alibeyoglu was elected mayor on the AKP ticket. “Armenians, Azerbaijanis, Georgians, Persians, Turks and Kurds were circle dancing together. Hrant [Dink] came. It was quite extraordinary,” Alibeyoglu recalled. EU and US funding for Armenian Turkish reconciliation schemes flowed fast and furiously. Karayazi was among the beneficiaries. He launched a “culinary diplomacy” scheme in 2014, which brought together women from Kars and Avetisyan’s native Gyumri, who took turns hosting each other in their respective countries and sharing recipes. The results were published in a cook book.

The festivals are now a relic of the past. A giant sculpture commissioned by Alibeyoglu, tall enough to be visible from Armenia, was meant to relay a message of peace. In 2011 Erdogan called it a “freak” and it was duly demolished.

Kavala has been in a Turkish prison since October 2017 on a slew of thinly evidenced charges that he was involved in the failed 2016 coup to overthrow Erdogan. The European Court of Human Rights, whose rulings are binding for Turkey, is demanding his immediate release. Erdogan, now informally allied with Devlet Bahceli, the far-right nationalist leader who egged on the war against Armenia and against Kurds in northern Syria, remains unfazed. Anadolu Kultur is under financial investigation and faces closure.

The abortive coup attempt — which Erdogan’s blames on Fethullah Gulen, a Sunni preacher who lives in self-imposed exile in rural Pennsylvania — sounded the death knell for the AKP’s experiment with a Western-style democracy. Erdogan now stars on a roster of autocrats alongside Russia's Vladimir Putin, Hungary’s Viktor Orban and Venezuela’s Nicolas Maduro.

Ghazarian recalls the better days, saying there was a “period roughly between 1985 and 2015 when Armenians from the diaspora and from Armenia proper went looking for their villages, for their roots in Turkey. Sometimes that included places like Istanbul because people like me felt very comfortable being in a city that evoked my grandmother’s memories, her stories, the smells and the tastes.”

Ghazarian continued, “After 2016 many things were lost in Turkey, including the place of Armenians, be they Armenians of Turkey or people like me who had pragmatic hopes.”

“If Osman Kavala can be sitting in prison all this time for only having done good, none of us should be surprised at the way in which relationships within Turkey between Armenians and Turks and outside of Turkey have evaporated, have disappeared,” Ghazarian said.