Turkish academia and the Armenian genocide

Turkish newspapers have exposed attempts by official institutions to control academic research on the Armenian genocide. 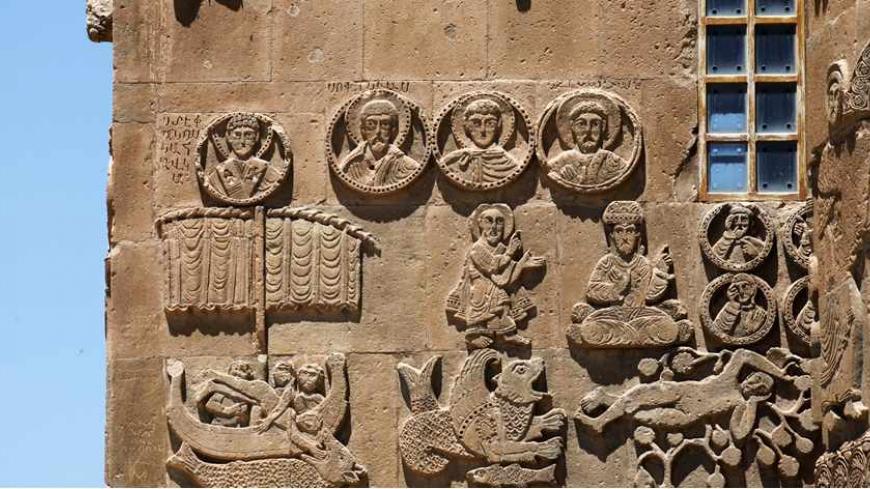 Carvings are seen on the exterior of the Church of the Holy Cross, an Armenian church on Akdamar Island in Lake Van, near the eastern Turkish city of Van, June 27, 2010. - REUTERS/Umit Bektas

Thousands of master’s theses and Ph.D. dissertations in the social sciences are written each year in Turkey. The Higher Education Board (YOK) keeps an electronic database of their topics and titles. A search in the database of dissertations on the Armenian genocide returns a striking result: Only four theses have been written on the issue and, as their titles immediately suggest, they all reflect Turkey’s official position on the massacres.

That is all Turkish universities have been able to produce in terms of theses on the topic of the Armenian genocide. How is this possible? Are there no academics willing to write dissertations contesting Turkey’s official history line and argue, for instance, that the 1915 events were a genocide? Or is there a state mechanism in place that doesn’t leave it up to chance?

A Dec. 12 report in the bilingual Turkish-Armenian weekly Agos reveals that academics working on dissertations about the Armenian genocide are under the close scrutiny of the Turkish Historical Society (TTK). According to Agos, the TTK has asked YOK for the details of academics studying the Armenian issue and the YOK chairman, in turn, has asked universities to provide that information. A document Agos published indicates that the YOK chairman had asked universities to supply “the names of master’s and doctoral students working on the Armenian problem, the titles of their researches and contact information, in view of making them available to the Turkish Historical Society in the work it conducts.”

As I mentioned in my previous article for Al-Monitor, various government institutions in Turkey are busy making counter preparations for 2015, the 100th anniversary of the Armenian genocide. The TTK is one of them. The society is likely to have requested the said information from YOK with a view of using it in those preparations.

When Agos asked the TTK why they needed that information, a TTK official stated that scholarships might be offered to academics working in this realm. Agos then asked whether the TTK would give a scholarship to someone whose thesis qualifies the 1915 events as genocide. The official responded that, since the TTK does not officially recognize the Armenian genocide, providing a scholarship to such a study might not be possible.

Agos argues that the TTK’s real motive is to control the academia and keep records of those working on the Armenian problem.

A subsequent report in the Taraf daily backed up Agos’ argument that those studying the Armenian genocide are being secretly profiled. Two former presidents of Istanbul’s Bogazici University, interviewed by Taraf, shed light on how the censorship mechanism works in the academia.

Ustun Erguder confirmed he had received letters from YOK with requests for information. “During my term as university president, YOK would send such letters, but we would dismiss them as [those requests] had nothing to do with our understanding of academic freedom. That’s something that has been done for years. We had even received letters suggesting we made sure that theses 'supporting Turkish unity' were written. … It is out of the question for me to approve of YOK requests seeking out the names and details of those writing theses on the Armenian problem,” Erguder said.

Another former Bogazici University president, Ayse Soysal, made the following comments: “I used to receive similar letters from YOK, while I was university president. It was routine.  Two types of letters would come from YOK. One would be in the form of [suggestions] that we support studies backing the state’s official view on subject X or subject Y.”

The insight the two former presidents provide on how the system functions explains why only four dissertations have been written on the Armenian genocide and why all happen to be in line with Turkey’s official view.

In another article for Al-Monitor, I had written also about how Turkey’s non-Muslims' birth registries were marked with secret codes and how the non-Muslims could not become army officers, judges or policemen. And this latest example — the lack of even one academic thesis contesting Turkey’s official position on the Armenian problem — is another indication that certain taboo realms are besieged by unwritten but stern rules.

True, the Armenian taboo has been broken in Turkish civil society and intellectual life. Yet, it continues to exist in this or that form in the “official” realm. Thanks to the exposure of practices such as the TTK request for information about academics studying the Armenian problem, we are getting clues on how Turkey’s official theses are being produced and sustained.

No doubt, the exposed practices represent only part of the whole picture. To understand fully why, how and in what atmosphere Turkey’s official theses remain intact, the known pieces need to be brought together with the pieces that remain beyond our knowledge. Only then will we be able to know how Turkey’s official history theses are able to survive unchanged.