What happened to Turkey’s Islamized Armenians?

A conference on Armenians, Islamized during the genocide years, is an encouraging sign that Turks are facing up to a painful chapter of their history. 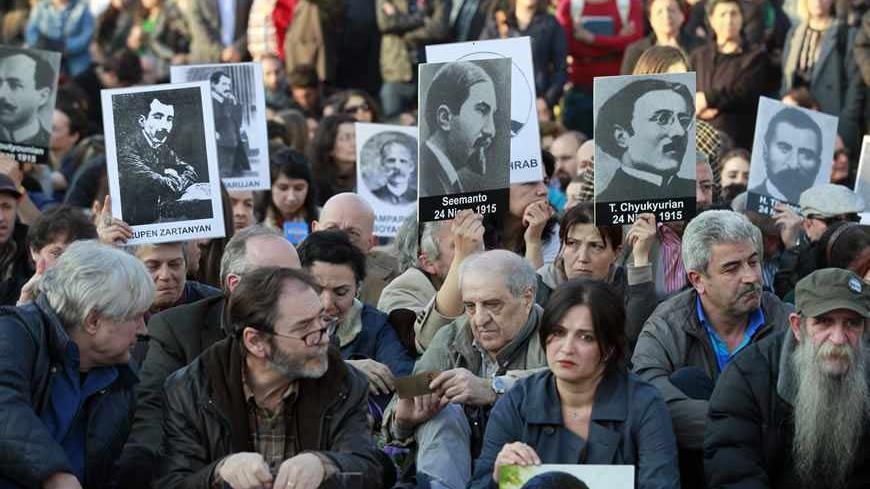 Human rights activists hold pictures of Armenian victims at Taksim Square in central Istanbul, April 24, 2013, during a demonstration to commemorate the 1915 mass killing of Armenians in the Ottoman Empire. - REUTERS/Osman Orsal

Back in 2005, a bid to hold Turkey’s first ever “Armenian conference” had sparked nationwide tensions. Then-Justice Minister Cemil Cicek accused the organizers of “stabbing Turkey in the back,” while Sukru Elekdag, a lawmaker from the main opposition Republican People’s Party, branded the organizers as “traitors” in a speech in parliament. Yielding to heavy pressure, Istanbul’s Bogazici University backed down from hosting the conference, and the event had to move to the private Bilgi University. The detractors, however, did not stop there. Furious demonstrators bullied the participants as the conference opened, and the event could barely be completed.

Since then, the atmosphere in Turkey has changed significantly. Commemorations are now being held on April 24 to remember the 1915 Armenian genocide. Scores of books are being published on the issue, which has become also a frequent topic in newspapers and TV programs. Even though the government maintains the official Turkish thesis on the 1915 events, the subject is no longer a taboo in the country.

A conference on Armenians Islamized during the genocide was held Nov. 2-4 in Istanbul, demonstrating that the genocide is now up for a free discussion in Turkey. The venue of the event was the same Bogazici University that had backed down from hosting the first Armenian conference eight years ago. This time, there were neither demonstrators outside the venue nor politicians bashing the organizers. That the event was free of incidents and tension signifies the notable progress Turkey has made in openly discussing the Armenian genocide.

Participants included Turkish, Armenian, American and European academics, intellectuals and descendants of genocide victims from Turkey, Armenia and many other countries. The conference, which attracted huge interest, discussed the fate of the Armenians who survived the genocide as Muslims.

“No one called them by their real names again. They had to destroy and efface themselves to save their existence,” Rakel Dink, the widow of slain Turkish-Armenian journalist Hrant Dink, said in her opening speech at the conference, organized by the Hrant Dink Foundation.

About 200,000 Armenians are estimated to have survived the massacres and deportations by becoming Muslims, according to the presentation of academic Ayse Gul Altinay. She estimated that several million people in Turkey are today the children, grandchildren, nieces, nephews and daughters- or sons-in-law of Islamized Armenians.

“For 90 years, those people led an invisible existence outside the family and sometimes even within the family. They completely lost their Armenian names and their bonds with their families and the Armenian community. And even when they kept those names and bonds, they were unable to do so openly,” Altinay said.

According to the conference paper of historian Taner Akcam, the Islamization of Armenians was not religiously motivated as religious fanaticism was alien to the Committee for Union and Progress, the Ottoman party whose members perpetrated the genocide. Akcam described Islamization as an assimilation tool used in the genocide. “Assimilation was a truly systematic policy, and forced conversion to Islam was one of its essential elements,” Akcam said.

University of California scholars Arda and Doris Melkonian explained how a large number of Armenian women survived the genocide by marrying Muslim men and were forced to convert. They noted that very few Armenian men had the chance to convert to escape death, and that survival through marrying Muslim women was out of the question for men.

The audience was deeply moved by the presentation of academic Nevin Yildiz Tahincioglu, who recounted the story of an Armenian woman named Sara. Her story (as told by Tahincioglu): “Sara was a 15-year-old from an Armenian village in the Viransehir district of Sanliurfa province. Eyup Agha — or 'Ayip Agha,' as he was called in the local dialect — was among the notables in the area. It was the time when the Hamidiye Corps were being set up. The aghas were encouraged to plunder Armenian villages and drive the inhabitants out. One day, a group including Ayip Agha raided Sara’s village. They rounded up the village men and led them away. A month later, Sara was washing laundry in a nearby stream when she spotted a mutilated arm. She recognized the watch on the arm as her uncle’s before a dog grabbed the limb. Sara followed the dog into a cave, which locals still call 'the Armenian cave.' What she discovered there were the corpses of the village men, mutilated by dogs.

“The survivors then decided to leave the village, but they were also rounded up by Ayip Agha. He locked them up in a depotlike place, keeping them without food and water for days. Then, among the captives, he spotted Sara, who was reputed for her beauty, and 'fell in love' with her. Ayip Agha, who already had two wives, announced to Sara he would marry her, but she refused. He threatened to kill Sara’s mother and eventually did so, but Sara remained adamant. Ayip Agha then threatened to kill her father and did so. Sara was still refusing to marry him. He said he would kill her brother, too. As the boy clang to her skirt, Sara acquiesced with two conditions: 'First, my brother shall not be killed. Second, you shall not change my name, which was given to me by my father.' Sara’s name was to haunt her throughout her life.

“Even though Ayip Agha accepted Sara’s wishes, her brother died in suspicious circumstances a year later. Ayip Agha then began to torture Sara, the wife who refused to change her name and was rumored to have never accepted Islam, continuing to carry a cross. He would inscribe crosses on Sara’s flesh with the dagger he had used to kill scores of Armenians. He would rape her each time he wanted sex, because Sara refused to go to bed with him. According to witness accounts, Sara’s screams during those rapes would echo in the yard of the house.”

The story went on along those lines. The biggest surprise, however, came at the end when Tahincioglu uttered the following sentence: “The bad men in this story are my family.”

Tahincioglu put this story together from the accounts of four witnesses as part of an oral history research. She studied her own family’s past. Both Ayip Agha and the narrators were her relatives. Putting her mark on the conference, Tahincioglu concluded, “It’s not the victim who should speak up and say 'I am a victim.' The past can be reconciled [only] when the perpetrator speaks up and says, ‘I am the perpetrator.’”

The conference on Islamized Armenians was a meaningful, though small, step for Turks in facing up to their history. It is encouraging to see that various aspects of the Armenian genocide are being discussed as the 100th anniversary approaches.