The 2018 commemoration of the Armenian massacres was memorable for the ban on using the word "genocide" and a big drop in attendance. 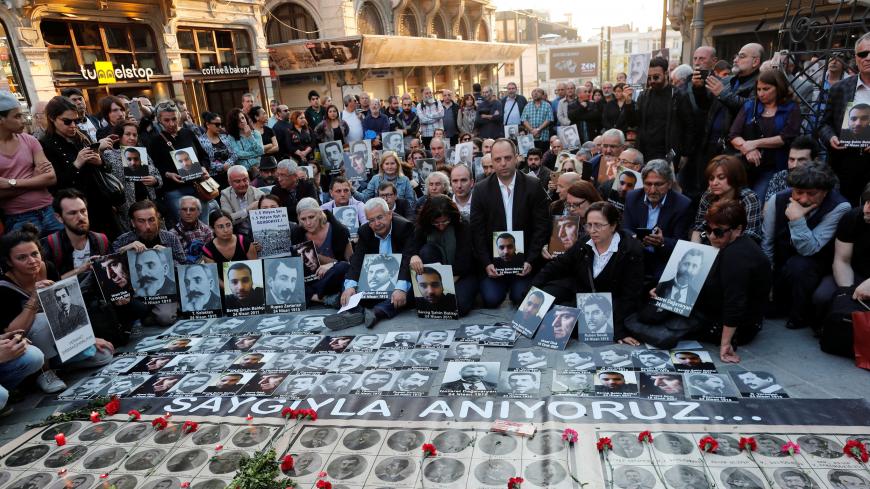 Human rights activists hold portraits of victims during a demonstration to commemorate the 1915 mass killing of Armenians in the Ottoman Empire, in central Istanbul, Turkey, April 24, 2018. - REUTERS/Osman Orsal

Turkish liberals commemorated the Armenian massacres this week but, for the first time, had to contend with a big drop in turnout and the police banning the word “genocide”.

“I can no longer [utter] ‘Armenian genocide’ in public, and that is a big step backwards,” said Nicolas Tavitian, director of the Brussels-based Armenian General Benevolent Union Europe. He was on his sixth visit to Istanbul to mark the day in 1915 when the Ottoman police arrested 250 of the city’s Armenian doctors, engineers and lawyers in what is considered the start of the genocide.

Turkish authorities only gave permission for the April 24 commemoration on the afternoon of April 23. Moreover, they insisted that the main ceremony be held at the bottom of Istiklal Caddesi, the main pedestrian street, rather than at the more popular upper end, where it is usually held. The upshot was that a mere 200 people took part in the event, a sharp decline from the 2,000 people who marked the 100th anniversary in 2015.

Armenians and numerous historians contend that 1.5 million Armenian citizens of the Ottoman Empire were killed during 1915-18. Turkey admits that about 300,000 Armenians died during that period, but insists that they perished as a result of wartime clashes between Muslims and Christians. Ankara vehemently claims that there were no systematic killings of Armenians and therefore no genocide.

The organizers of the April 24 events were dismayed that the government took a tougher position, which seemed irrelevant to the state of emergency that has been in force since mid-2016.

“During the state of emergency in 2017, the word ‘genocide’ was used [in our banners], and we didn’t have any problem,” said Meral Cildir, an executive of the Human Rights Association, which bravely began commemorating the genocide in 2005.

This year, the first encounter with the police took place at noon, when organizers unfurled banners outside the Museum of Turkish and Islamic Arts in Sultanahmet. The Armenians rounded up in 1915 had been taken to the stone building and held as prisoners there.

Cildir said police officers objected to the banners containing the word “genocide,” saying they should read “so-called genocide.” The encounter ended with the police detaining the activists and confiscating their banners.

Levent Sensever, a co-organizer from the group DurDe (Say Stop to Racism and Nationalism), told a crowd of 20 and an equal number of journalists that the decision had been made to call off the demonstration at the museum. Instead, a press conference would be held at the Human Rights Association's offices.

The plainclothes police commander on the scene confirmed to Al-Monitor that the demonstration could have proceeded if the word “genocide” had been deleted.

At the press conference, Benjamin Abtan, head of the European Grassroots Antiracist Movement, said Turkey’s position on the Armenian issue is not merely a matter of historical interpretation. “There is a correlation between commemorating the Armenian genocide and the level of democracy and freedom today in Turkey,” he said.

French lawmaker Mireille Clapot, who represents the heavily Armenian constituency of Valence, said at the news conference, “Every Armenian person living in France has one grandfather or grandmother who was a victim of the genocide.”

Armenians around the world have similar family histories. This has led to the genocide becoming a popular issue for some politicians abroad.

In the United States, President Donald Trump released a customary statement April 24 — “We honor the memory of those who suffered”— but disappointed Armenians by declining to describe the event as genocide. This is a concession to Turkey that US presidents have observed since 1981, when Ronald Reagan used the G-word.

In Syria, President Bashar al-Assad hosted a delegation of Armenians. According to the official Syria News, Assad said, “What’s needed today is that various segments of the society open a dialogue with each other.” If asked, the Syrian opposition would probably say that the current civil war could have been avoided had Assad been open to dialogue.

In Ankara, President Recep Tayyip Erdogan issued a statement, as he has done annually since 2014. “It is Turkey’s conscientious and ethical responsibility to share the historical pain of our Armenian citizens,” he said. In what seems to have been a signal of his new hard line, Erdogan warned Turkey’s 70,000 Armenians to spurn those “who are trying to ignite hatred and hostility by distorting [our] shared past.”

In Istanbul, those who sincerely regretted what had happened in 1915 decided to compromise by cutting the word “soykirim” (genocide) from their messaging.

When the main commemorative ceremony began at 7 p.m., activists laid a large banner on the paving stones of Tunel Square. It was printed with pictures of dozens of the genocide victims, their names written in Armenian. At the top, the banner read, “Saygila Aniyoruz” (We commemorate with respect).

Some 50 people sat on the ground behind the banner, many holding pictures of individual victims. There were 150 more people surrounding those on the ground. The Armenian funeral dirge played over a PA system. The music was haunting. People stood with long faces, deep in thought. One man, his thumb supporting his jaw and his forefinger on his cheek, appeared to be pondering how his country could have done such a thing.

Foremost among those sitting on the ground was Rakel Dink, widow of the late Armenian editor Hrant Dink, whose assassination in 2007 had drawn a cortege of 100,000 people. Three photographs stood propped against her knees — one of her husband, one of Sevag Sahin Balikci, an Armenian performing national military service who was shot dead by a nationalist in 2011, and one of Ruben Sevak, the Armenian poet killed in 1915, reportedly after refusing to convert to Islam.

The solemnity of the scene and the mournful music appeared to have no effect on the customers at the restaurants bordering Tunel Square. The diners continued to eat their kebabs and chat. “They’re ignorant,” the Human Rights Association’s Cildir remarked.

About 300 feet away, along Istiklal Caddesi, 27 Turks staged a counter-demonstration. Members of the People’s Liberation Party (HKP) held up posters that read “Genocide lie is an American plan.” The ultra-nationalists were constrained by a phalanx of about 30 riot police, who practically blocked the street, allowing casual strollers to pass but not demonstrators.

The police also protected those commemorating the genocide. Officers wearing jackets emblazoned with “Security Branch” ringed the perimeter of the crowd, guiding pedestrians past and guarding against interference.

“This is a government that knows when to get the dogs out and when to get them back in,” said Tavitian. “There is large-scale repression [in Turkey], but it is managed.”