Under the state of emergency, the president of Turkey now has the power to appoint the heads of all state-run as well as private universities. 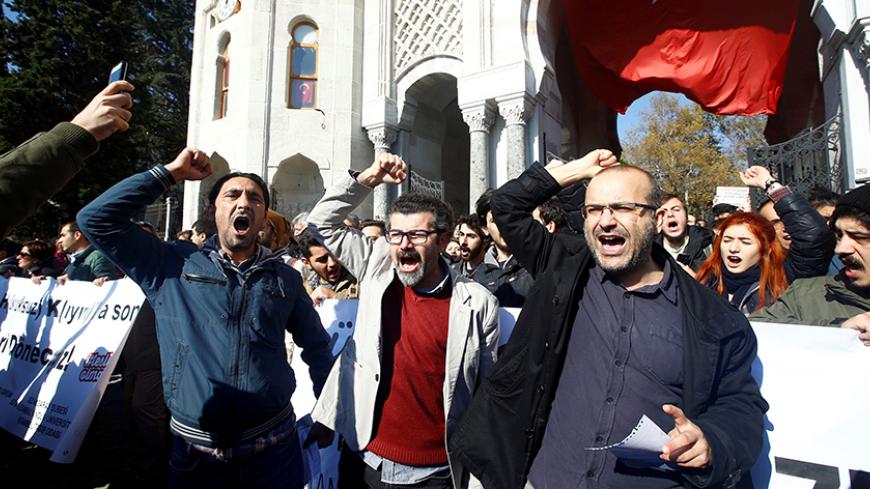 Demonstrators shout slogans during a protest against a purge of thousands of education staff since the attempted coup in July, in front of the main campus of Istanbul University at Beyazit Square, Nov. 3, 2016. - REUTERS/Osman Orsal

When the Turkish government called for a state of emergency six days after the failed coup attempt of July 15, many critics of the government, including this journalist, supported the move, given that the nation had just confronted a lethal threat. As the state of emergency unfolded, however, some of these initial supporters, again including this one, began to change their minds primarily for two reasons.

First, the crackdown against suspected coup plotters turned into a witch hunt, which sunk to the level of raiding one of the country's few remaining critical newspapers. Second, with a plenitude of executive orders and the rendering of the Turkish parliament as practically ineffective, the government hastened its ambition of building a political system based on an excessive concentration of power. A perfect example of the latter is Executive Order 676, issued Oct. 30. Among other things, it gives the Turkish president the power to appoint all rectors, the top executives of universities. In short, all Turkish universities — even the private ones — have thus been brought under the full control of the president.

This might be too mind-boggling for Western readers to fathom. In the West, especially in the United States, universities are autonomous institutions. Even if state-run, they are more or less immune from political intervention by the government. If they are private, the government has no say in their administration. What has been introduced in Turkey is the exact opposite. It is comparable to the president of the United States appointing the presidents of all universities in his nation, from Harvard to UCLA and institutions north and south.

Of course, Turkey has never had a political system as decentralized as that of the United States, and Turkish universities have never been fully independent. Before the executive order in question, all state and private universities had been under the control of the Higher Education Board (YOK), whose head is appointed by the president. The president also had the right to appoint the rectors of all state universities, based on YOK recommendations but also ostensibly on the results of intra-university elections in which academics voted for their colleagues seeking the office. Meanwhile private universities were more independent, with boards of trustees choosing rectors with the blessing of the YOK.

Two major changes have now been introduced. First, the intra-university elections at state universities are a thing of the past. The president will simply appoint whomever he wants, without a feedback mechanism involving academics. Second, and more stunning, the president will appoint the rectors of private universities. The latter’s boards of trustees will only be able to make suggestions to the YOK, which will defer the final decision to the president.

What does this means in practice? According to political science professor Ustun Erguder, a former rector of Bogazici University and a prominent liberal, “We went back to 1982.” That year, Turkey was ruled by the brutal military junta that established the YOK to bring universities under its control. After that, as Erguder explained, various reforms were implemented over the years, including the intra-university election system, to provide some self-governance for Turkish academia. Now, however, to Erguder's regret, these reforms have been reversed.

Bogazici, Turkey’s most prestigious university and this writer's alma mater, is impeccably liberal. It had exceptionally resisted the headscarf ban imposed by the YOK's illiberal secularists in the 1990s and is now protesting the executive order putting it under Ankara's full control. On Nov. 1, some 350 academics from the institution gathered on the campus, wearing their academic gowns, to declare that the move would “leave university administrations in the hands of the political will.” Other Turkish universities, however, have remained silent. They may well recognize this same political will, but have decided to go along, staying in tune with it.

There are of course defenders of the executive order as well. They argue that the intra-university elections brought polarization to campuses and diverted academics from their real job. There is some merit to this argument, as some objective critics of the system have cited this as well. The problem now is what replaces the intra-university elections. The successor is not a less politicized form of self-governance, such as by a board of trustees, but oversight by a politicized hierarchy that will tie all universities to the political will of the president.

What will this hierarchical system bring to Turkish universities, already under major stress because of the massive purge of suspected Gulenists and left-leaning academics who infuriated the government by denouncing its anti-terror tactics? Well, it will probably bring about more Erdoganization. As President Recep Tayyip Erdogan will have the power to appoint all university heads, he will probably chose them from among the people with the “right” ideology, especially at a time when he suspects so many people of being traitors. As a result, the ongoing trend of “ideological nepotism,” as observed by Ali Alpar, an astrophysicist at Istanbul’s Sabanci University, will probably deepen.

Nepotism will, unfortunately, produce its usual consequence: curbing meritocracy. People will rise or fall in the academic world based on ideological affiliation, rather than merit alone. If the right ideology is the tool by which one rises, why bother with building one's merit and accomplishments?

Of note, Turkish universities also suffered from the same problem in the past. Aligning with the official ideology, Kemalism at the time, was the safest bet in academia, especially in the late 1990s when the arch-Kemalist military imposed its will on campuses. Today's official ideology is Erdoganism, rather than Kemalism, but the way it suffocates Turkish academia, while supposedly trying to “save” it, is not so different.