Historical Bogazici University has long been an ivory tower out of the control of President Recep Tayyip Erdogan and his party. 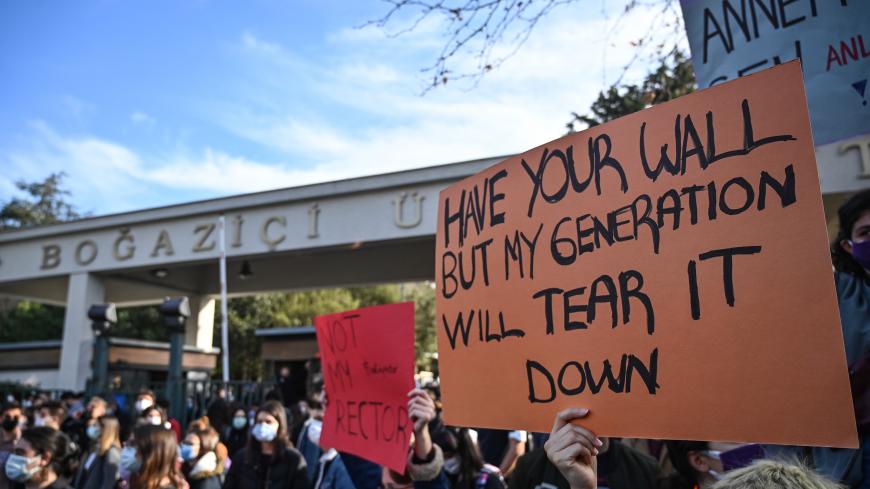 Students demonstrate against the appointment of Bogazici University's new rector by Turkey's president on Jan. 4, 2021 in front of the university in Istanbul. - OZAN KOSE/AFP via Getty Images

On his first day in office as the rector of one of Turkey’s most prestigious universities, Melih Bulu received a literal cold shoulder. The faculty greeted their new boss by contemptuously turning their backs to the rectorate building — just as students of the same university had done four years ago. The target then was Bulu’s predecessor, Mehmed Ozkan, who had also been handpicked as the rector of prestigious Bogazici University by President Recep Tayyip Erdogan in 2016. This time was worse as Ozkan had been a member of Bogazici faculty, but Bulu is an outsider whose academic credentials are tarnished with allegations of plagiarism.

As students from Bogazici and other universities continued protesting around the campus and online, Erdogan rallied to Bulu's defense. “The Board of Higher Education has provided me with nine names and I have selected Bulu based on his academic qualifications,” the president said on Friday. “I am certain that he will be very successful.”

Asked about student protests at the university, with arrests and images of gates closed with handcuffs to keep students out, Erdogan repeated his refrain from similar cases: “These are not students, these are terrorists.”

On Sunday, presidential spokesperson Ibrahim Kalin maintained that "questioning the appointment would be questioning presidential powers" and accused the opposition of politicizing a simple appointment that was entirely within the rights of the president. The next day, a lawyer took up the matter in court, arguing that the move was unconstitutional.

The presidential appointment of university rectors has long been a source of conflict in Turkey’s academic world, which has long struggled for independence. The battle became more difficult in 2016 in the aftermath of the failed coup, when a decree gave the president the right to appoint anyone as a rector. It meant an end to the intra-university elections. Right after the 2016 decree, Erdogan flexed his muscles by appointing Ozkan instead of Gulay Barbarosoglu, the sitting rector who had been voted in by the faculty of Bogazici University.

Since then, many members and cronies of the ruling Justice and Development Party (AKP) had been named to the top posts of universities across Turkey. In Izmir, the Aegean port known for its staunch opposition to the AKP, Nukhet Hotar, the party’s vice chair and Izmir deputy, was named as the head of prestigious Dokuz Eylul. Edibe Sozen, a former AKP deputy who voiced support for Bulu’s appointment, was named as rector of Gaziantep’s Hasan Kalyoncu University. Earlier in 2020, former AKP deputy Necdet Unuvar was appointed rector of Ankara University amid protests by students and academics.

“It is the sheer arrogance of the ruling party in bringing their members to top posts — be it to the key embassies or to the top banks,” Meral Aksener, the leader of Iyi Parti, told a morning program on Fox TV right after the appointment. “Where is merit, where is the state tradition?” she asked, pausing for a dramatic effect and adding, “Where are the diplomas?”

Aksener’s words were a thinly veiled reference to Hamza Yerlikaya, a former wrestler and an aide to the president who was appointed as the deputy chair of state-run VakifBank in 2020. Not only did Yerlikaya lack any specialized economic training, but he was convicted of fraud for falsifying his high school diploma.

When the opposition brought up Yerlika’s fake diploma to parliament last December, the debate inevitably turned to the president’s own controversial credentials. “You (the AKP) do not favor people who have … diplomas because your own founder, your president’s diploma is under doubt,” said Erdal Aydemir, the Bingol deputy of the Peoples' Democratic Party.

Politicians and academics point out that corruption and cronyism — including Erdogan’s ill-fated appointment of his son-in-law Berat Albayrak as the country’s economy tsar — is one of the main reasons the ruling party is losing votes. “I have talked to the president many times, wrote many reports saying that nepotism should not dominate the state,” Ahmet Davutoglu, Erdogan’s former prime minister-turned-political opponent, said in a TV interview in November.

Placing a crony at the head of Bogazici University is symbolic as an important part of Turkey’s academic and cultural scenes, areas the president sees as the weakest points of his grip on Turkey.

“Even after all the blows Turkey’s academic sector has received, Bogazici is still seen as an academic idyll,” Bogazici sociology professor Biray Kolluoglu told Al-Monitor. “It has a beautiful campus, a rich historical heritage and wide academic as well as extracurricular activities. Some see Bogazici as an ivory tower, but this is precisely what universities should be — academic towers where there is freedom of thought, expression and academic independence.” The school is also an important cultural center with its own theater troupes, choruses and events.

Its alumni and faculty have long been key personalities in the Turkish political and cultural scenes, from Tansu Ciller — a part-time professor who became economy minister and then prime minister in the 1990s — to Gorgun Taner, the chairman of the powerful Istanbul Foundation for Culture and Arts that organizes the Istanbul Biennial.

The US-based magazine US News and World Report has put Bogazici University among the top 200 universities of the world in 2020 as #197. Turkish universities hardly ever make it to the top global rankings.

“My dream is to push Bogazici to the top 100,” said Bulu in a tweeted statement after the appointment. However, this remark, like others he has made to woo students about liking Metallica and “knowing Bogazici culture,” backfired.

Bogazici students protested their new rector with the metal band’s “Master of Puppets” as they called on him to resign. Reminiscent of the 2013 Gezi Park protests, the demonstrators used humor as an effective weapon toward both Bulu and his “puppet master” Erdogan.

Comparing the rector to the "kayyum," the many AKP-appointed trustee governors, they suggested a portmanteau for the new position: “rectum.” Others mocked the AKP members and cronies who called Bogazici students and faculty “elitist” in one tweet and “scum” in another, asking the AKP to make up its mind whether they were elites or untouchables.