Police raided the homes of at least 17 students after they protested the Turkish president's appointment to lead a top university in what supporters say was a blatant and violent attempt to crush their dissent. 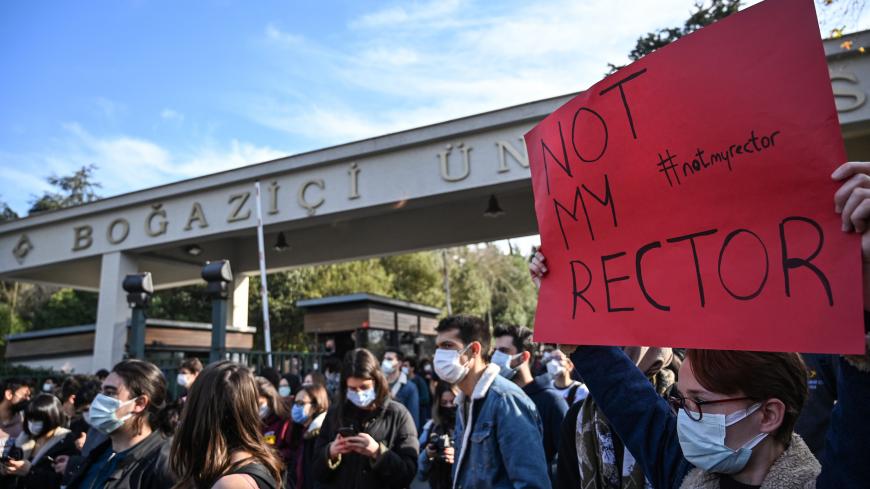 Students chant slogans and hold placards on Jan. 4, 2021, in front of Bogazici University in Istanbul during a protest against the appointment of a new rector by Turkish President Recep Tayyip Erdogan. - OZAN KOSE/AFP via Getty Images

At least 17 students protesting the appointment of a member of Turkey’s ruling Justice and Development Party to head one of the nation’s top universities by presidential decree were arrested in dawn police sweeps Tuesday and subjected to physical violence and threats, lawyers say. Images of the raided homes showed doors ripped out and broken walls.

The students are being held at the anti-terror directorate of Istanbul’s Vatan police headquarters on charges of resisting arrest, violating laws governing the right to march and demonstrate and having links to terror groups. Rights groups describe the arrests as part of President Recep Tayyip Erdogan's systematic campaign to intimidate dissenters, suffocate free expression and strip academia of its independence.

The Interior Ministry claimed that 15 of the students protesting the Jan. 1 appointment of Melih Bulu as rector of the prestigious Bogazici University were not students at all and that some were connected to an outlawed revolutionary left-wing group. The students are being accused of hurling rocks at police and calling them “killers” during violent clashes Monday with police. The new rector repeated some of the claims, saying, “The detained people are not students; they are members of certain organizations.” He called the demonstrations against his appointment “an unforeseen provocation.”

Onalan told Al-Monitor, “We established their identities and all, with the possible exception of two of them, are students from different universities who were peacefully protesting against Bulu. None is linked to any terror group.”

Eyewitnesses present at Monday’s demonstration at Bogazici University said students had thrown plastic bottles and tufts of grass at riot police only after they were sprayed with chemical irritants and rubber bullets. No rocks were hurled, and there were no agents provocateurs in their midst as alleged by the government, one of the eyewitnesses told Al-Monitor.

Onalan said arrest warrants are pending against 13 other students.

During their interrogations, three of the detainees, one of them LGBT, were strip searched — an increasingly pervasive abuse that has been exposed by opposition lawmaker Omer Faruk Gergerlioglu.

“Two of the detainees are LGBT people. Police terrorized them with sexual slurs and threats,” Onalan said. 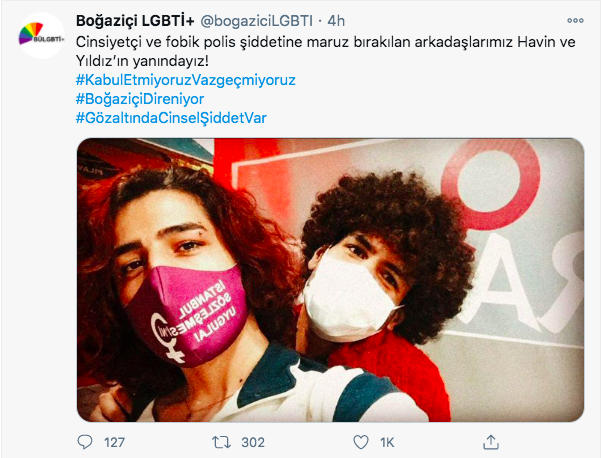 The pro-government media swiftly resorted to well-worn tropes, depicting the students as miscreants acting under the orders of malign foreign powers bent on overthrowing Erdogan.

The reports echo the conspiracy theories that swirled around the 2013 mass protests triggered by government plans to build a shopping mall in a rare green space near Istanbul’s Taksim Square.

Bogazici, a state university that draws a mix of prodigies from the Anatolian underclass and entitled progeny of Istanbul elites, has a history of democratic dissent against successive governments. It was one of the few academic institutions where faculty ignored bans on the Islamic-style headscarf imposed by the country’s generals when they still held sway.

When Erdogan came to power the bans were lifted, as were laws that gave the government the authority to appoint rectors in lieu of letting universities elect their own bosses. The latter measure was reinstated following the 2016 coup attempt, which accelerated Turkey’s descent into full-blown authoritarianism.

“Since the failed coup in 2016, government-appointed trustees, arbitrary decrees, violence and disinformation campaigns have been the main tools of governance,” said Sinem Adar, a Bogazici graduate who is currently a research associate at the German Institute for International and Security Affairs. Like many others, Adar sees parallels between the presidential appointment of rectors to that of administrators to run municipalities across the Kurdish-majority southeast of the country. They have replaced scores of democratically elected mayors accused of thinly evidenced terror links and sent to jail.

On Tuesday, a group of faculty members called for the students to be released and stood with their backs facing the rectorate hall during a ceremony to mark Bulu’s appointment.

Students from Ankara’s Middle East Technical University have said they will take part in demonstrations planned for Wednesday to show solidarity with Bogazici.

Bulu, who is accused of plagiarizing his doctoral thesis — he denies it, though he's failed to explain why the document is no longer accessible online — seemed unswayed by the furor. He told private Turkish broadcaster Haberturk Tuesday that he will not step down. It’s unlikely Erdogan would allow him to do so even if he wanted, as it would signal weakness.

After 18 years of uninterrupted power, Erdogan is beginning to lose his appeal amid rising inflation, unemployment and institutionalized corruption. “Unwilling to share power and unable to mold the country after their desired image, those who govern Turkey today are trying to plunge it into obedience,” Adar noted.

“Against this backdrop,” she added, “the real surprise is the courageous will of students to voice opposition to a government-appointed rector. This kind of will is scary for any government that rules by force.”