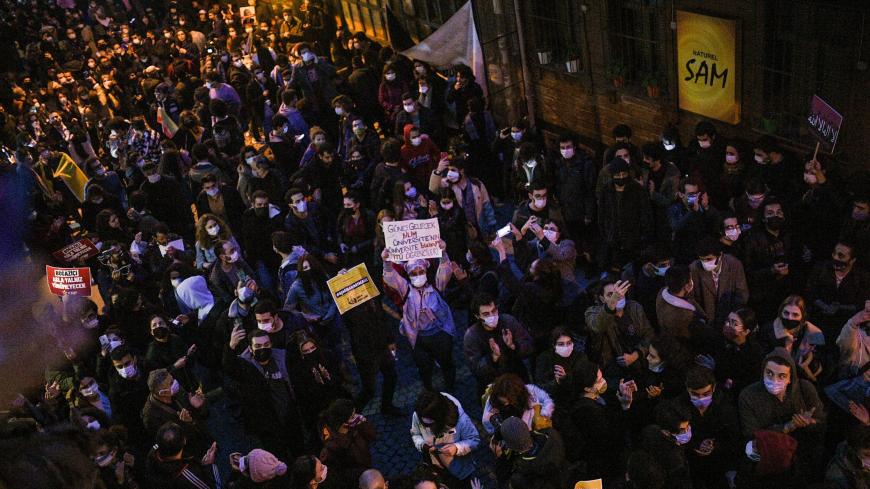 People protest on an Istanbul street on Feb. 2, 2021, after clashes erupt during a demonstration against the Turkish president's appointment of a party loyalist to head Istanbul's Bogazici University at the start of the year. - BULENT KILIC/AFP via Getty Images

ISTANBUL — Ongoing student-led protests that have seen more than 300 people detained this week were denounced by several top Turkish officials Wednesday. In some of his most heated remarks on the demonstrations yet, Turkish President Recep Tayyip Erdogan likened protesting students to terrorists, saying state officials would not tolerate the escalating unrest that has sparked sometimes violent rallies in a number of Turkish cities.

"Are you students or terrorists who dare to raid the room of the rector?" Erdogan asked during a videoconference Wednesday, referring to demonstrations at Istanbul’s Bogazici University Monday, when students rallied near the government-appointed rector’s office to call for his resignation.

Since Jan. 4, students have been protesting the appointment of Melih Bulu by Erdogan to head Bogazici University, one of Turkey’s top educational institutions. Protesters claim Bulu, a longtime member of Erdogan’s ruling Justice and Development Party, was undemocratically installed as school rector on Jan. 1 and his appointment infringes on academic independence.

Over the last month, demonstrations have grown, drawing support from students at other universities, and police forces quelled rallies in Istanbul Tuesday with tear gas and rubber bullets after governor’s office issued a protest ban. Images on social media showing protesters being violently detained by police drew an outcry from some Turkish citizens and several opposition party members, who said a disproportionate security intervention had escalated mostly peaceful rallies.

Now faced with some of the largest demonstrations since the 2013 Gezi protests, Erdogan and his supporters moved to condemn protesters in an apparent attempt to prevent further rallies.

Devlet Bahceli, chair of the Nationalist Movement Party and a key Erdogan ally, also criticized the protesters Wednesday, referring to them as “poisonous snakes" as well as "vandals and barbarians” that should be stopped by “whatever means necessary.”

The comments came after Turkey’s Interior Minister Suleyman Soylu made separate claims in televised statements Wednesday that a significant number of detained students were linked to far-left terror groups.

“Seventy-nine of those arrested are members of terrorist organizations, including the DHKP/C,” Soylu said, using the acronym for the Marxist-Leninist Revolutionary People's Liberation Party/Front. He added, "A minority [group] wants to make [Bogazici University] an ideological center. We won't allow this."

As the officials condemned demonstrators, about 100 students organized a rally outside Istanbul’s Caglayan courthouse Wednesday to call for the release of detained students. Cagatay, a Bogazici student who took part in the rally and gave only his first name, said Soylu’s comments were not surprising.

“These are horrible accusations, but we’ve gotten used to them,” Cagatay told Al-Monitor. “This government has often defined any form of opposition as ‘terrorist.'”

Most of this week’s 300 detainees have been released, while 29 remain in detention and 11 were placed under house arrest, according to official statements. In response to the ongoing unrest, the nation’s leading business group, the Turkish Industry and Business Association, called for “peaceful solutions” to recent events Wednesday.

“We are faced with a political power holder that has lost its control. It is feeding on tension,” Kilicdaroglu said, adding, "I am making an open call to the government from here: Release the children of Turkey and put an end to this tension that you have created."

In comments published Wednesday by the Turkish daily Haberturk, Bulu said being the rector of Bogazici University was a long-held dream and he has never thought of resigning amid the month-long backlash.

"I initially predicted this crisis would be over in six months and this is what will happen,” Bulu told Haberturk. “The tension will subside. This crisis can end in six months."

Though protests initially began over Bulu’s appointment — conducted through a process introduced in 2016 in which the Turkish president approves one of three rectoral candidates to universities — demonstrations intensified following the arrest of two Bogazici students this weekend for displaying a poster depicting one of Islam’s holiest sites with LGBT flags.

Since then, political rhetoric over the demonstrations has taken on broader cultural topics regarding the rights afforded to LGBT and minority communities in the country. Speaking Wednesday, Erdogan said “there is no such thing” as LGBT and, “This country is national and spiritual, and will continue to walk into the future as such.”

Earlier this week, Bulu drew criticism for blocking the application for the establishment of an LGBT student club at Bogazici over procedural requirements. In press statements Wednesday, he said he held no negative feelings against LGBT individuals and was a “person who defends LGBT” students.

Whether the comments calm current tensions remains to be seen. Cagatay said he and other protesting Bogazici students would continue demonstrating until academic independence is reestablished at the school.

“We are calling for his resignation, yes,” Cagatay told Al-Monitor. “But we won’t stop protesting if Bulu resigns and then another rector is appointed. We want a democratic election process.”