Berke Gok and Perit Ozen were among 14 students arrested in October 2021 for protesting the government-appointed rector at Istanbul’s Bogazici University. 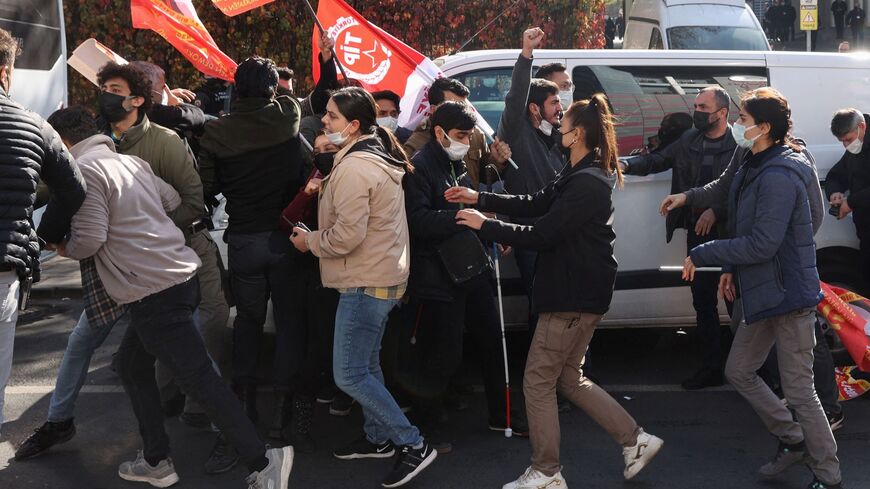 Students hold flags and banners as they demonstrate against the Turkish education system and ruling AKP party, in front of Ankara's University, on Nov. 8, 2021. - ADEM ALTAN/AFP via Getty Images

A Turkish court on Friday ordered the release of two students jailed for participating in protests against the government-appointed rector of one of Turkey’s top public universities.

Rights groups had called on Turkey to release Berke Gok and Perit Ozen, each of whom had spent more than three months behind bars on charges including violating Turkey’s law on demonstrations and preventing public officials from doing their jobs.

Students at Istanbul’s Bogazici University launched protests in January 2021 after President Recep Tayyip Erdogan appointed Melih Bulu, a loyalist with links to his ruling Justice and Development Party, to serve as the prestigious university’s rector. Erdogan’s critics said Bulu was unqualified and his appointment bypassed the university’s traditional election procedures.

Nearly a thousand students were detained for their involvement in the youth-led protests and many lost their college scholarships. Rights organizations documented excessive force and targeted house raids against student protesters, who Erdogan likened to “terrorists."

Following months of protests that spread to other Turkish cities, Erdogan replaced Bulu with his former deputy, Naci Inci, in August. Fourteen students were arrested in October for protesting Inci’s installation as rector.

Of that group, 12 were released. But Gok, a senior in the physics department, and Ozen, a history student, were jailed pending trial.

Their lawyer says the pair have spent much of their detention in solitary confinement and are denied access to medicine, school exam papers and visits by friends.

Gok and Ozen were expected to be released from Silivri prison on Friday, their lawyer told Germany’s DPA news agency. The trial against them and the 12 other student protesters is scheduled to resume on March 21. If convicted, they face six to 32 years in prison.

In a joint statement this week, four members of the European Parliament expressed concern over students’ “arbitrary repression,” and said they were paying a “very high price for exercising their fundamental right to protest and demonstrate.”