Melih Bulu, the unpopular political appointee to the top post of Turkey’s prestigious Bogazici University, has finally been fired. 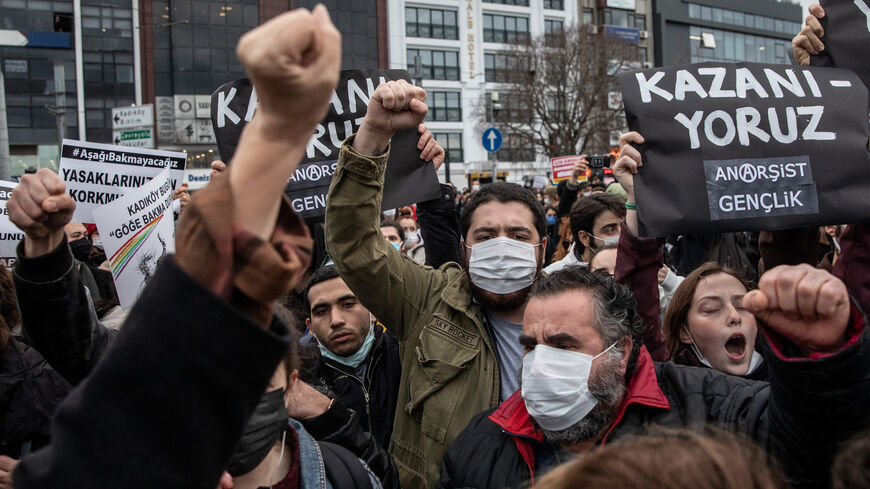 Protesters chant slogans as they walk through the streets during a protest against the appointment of new Bogazici University rector Melih Bulu in the Kadikoy district on Feb. 2, 2021, in Istanbul, Turkey. - Chris McGrath/Getty Images

In an unexpected overnight move right before the fifth anniversary of the failed 2016 putsch, President Recep Tayyip Erdogan removed Melih Bulu from his contested post as rector at Istanbul’s Bogazici University, one of Turkey’s most prestigious higher education institutions.

The sacking, interpreted as backpedaling by Erdogan, comes after months of protests by Bogazici students and academics as well as their supporters across Turkey against the political appointee.

That the man who was installed in the coveted post by an overnight decree was removed by another was not lost on Turkey’s political and academic circles. “Gone as he has come,” tweeted Faik Oztrak, the spokesman of the opposition Republican People’s Party. Others have posted a poem: “Roses are red, violets are blue, after 192 days of protests, Bogazici got rid of Melih Bulu.”

“Bulu said that the protests against him would be over in six months; instead, it is his term in office that has ended,” Biray Kolluoglu, a sociology professor and former dean of student affairs at the Bogazici University, told Al-Monitor. “This, of course, is quite a success for the university’s students and academics who have stood for academic freedoms despite all the suppression.”

A member of the ruling party whose academic reputation is tarnished by accusations of plagiarism, Bulu was catapulted to the post on Jan. 1, spurring one of the largest and longest demonstrations since the 2013 Gezi Park protests.

Angered that the university senate’s vote to choose its own rector was brushed aside, the community greeted the rector by turning their back to the rectorate every day for the entire academic term. On July 15, most of the faculty and students returned to the spot to see off the unpopular rector with the song, “No one is a sultan.”

The farewell comes after protests turned the picturesque campus overlooking the Bosporus into a battlefield. In the first days of the protests, the metal doors of the south campus were blocked by handcuffs to prevent protesting students from entering. Later metal barriers and armed police blocked the way to parts of the campus. Snipers were placed on the rooftops, tear gas was used against the students and some 600 students were taken into custody during a major protest in February alone.

Erdogan said that the protests were the work of “terrorists,” not students, and his political ally Devlet Bahceli called the protesters “venomous snakes.” Interior Minister Suleyman Soylu alternated between calling demonstrators “far-left terrorists” and “LGBT degenerates.”

The university placed dozens of students under disciplinary investigation for “insulting campus security personnel” and “organizing unauthorized protests on campus," charges that could result in temporary or permanent expulsion from the university or losing scholarships.

As a final straw in July, Bulu closed off the campus, citing health and security reasons. Education insiders in Ankara told Al-Monitor this last move was “a desperate show of force” on the part of Bulu, whose ousting had been in the cards for at least a month. A former bureaucrat told Al-Monitor that circles close to the president said that the political appointee had proven to be “too weak” to establish his authority at Bogazici, the only Turkish university on the top 200 universities list of the US-based magazine US News and World Report in 2020.

When the ax fell in the early hours of July 15, Bulu appeared more surprised than anyone else. He first dismissed the news as false on Instagram, joking, “How come I do not know about it? Forget it guys, just go to sleep.” Shortly afterward, he deleted the post and his account.

But it might be too early to call Bulu’s sacking a victory for the students. A few hours after the dismissal, the Board of Higher Education announced that professor Naci Ince, the second-in-command appointed by Bulu, would become the acting rector.

“Inci has supported and upheld the faulty policies of Bulu. Continuing with him as the rector would be a mistake,” Kolluoglu said.

“Our resistance was not against the person of Bulu but the undemocratic way he was appointed,” Ebru Batur, a member of the Bogazici Dayanisma, the student’s solidarity group, told Al-Monitor. The group has a 10-point list of requests that includes the removal of Bulu, Ince and all other government-appointed administrators, closing the new departments that Bulu agreed to establish while in office, dropping legal charges against protesters and the selection of a new rector through a new election in which all faculty members, students and employees can vote.

The Bogazici LGBTI Studies Club also said that it would not back down until a new rector is democratically elected and the club, “illegally closed down by Bulu,” is reopened.

“I am happy because this was a victory for us, but we have to look ahead. Our demand from day one was to have a democratic process for selecting rectors and beyond. It was for democracy and freedoms in Bogazici and in Turkey,” Ugur Unal, a Bogazici graduate and co-founder of Bogazici TV, told cameras as he arrived on campus early on July 15.

It is unclear at this stage whether Inci would replace Bulu altogether or whether the president will appoint someone new. The Board of Higher Education has announced a vacancy for the rector post at Bogazici University, inviting interested academics to apply by Aug. 2. Under the present Turkish legislation, in place since 2016, the board makes a short list and submits it to the president, who may appoint someone on list or yet another candidate.

Bogazici University, on the other hand, insists on maintaining its own decades-long tradition of choosing one of its own faculty members for the post by a vote at the university senate and expects the choice to be approved by the president. As much as Erdogan and his party would like to woo young votes in the next elections, it is unlikely that the iron-fisted president would go so far as allowing Bogazici to choose its own rector at this point, much less grant the rest of the students' demands.